Jurgen Klopp's side made it two wins from three in Champions League Group A as Rangers were overpowered on the pitch amid a frenzied atmosphere at Anfield; Trent Alexander-Arnold and Mohamed Salah scored the goals for Liverpool

Trent Alexander-Arnold's fabulous free-kick set Liverpool on their way to a confidence-boosting 2-0 Champions League win over Rangers at Anfield.

The full-back's form has been much discussed but he lit up the night with a wonderful effort to fire Liverpool ahead before Mohamed Salah scored from the spot after Luis Diaz was fouled by Leon King. It only hinted at the total dominance of Jurgen Klopp's side.

The result maintains Liverpool's grip on second spot in Champions League Group A at the halfway stage, while Giovanni van Bronckhorst's side find themselves languishing at the foot of the table without a point or even a goal from their three games so far.

How Liverpool dominated Rangers at Anfield

Klopp's response to his team's defensive frailties of late was to remove Fabinho and introduce an additional forward to the starting line-up. Salah was joined by Diaz, Diogo Jota and Darwin Nunez. The best form of defence and all that.

Amid a crackling Anfield atmosphere, that is how it proved as his Liverpool side took the game to Rangers from the outset. Nunez fired off a smart shot. Kostas Tsimikas raided forward well and it was his pass that saw the Uruguayan fouled for the key free-kick.

There was plenty to do but Alexander-Arnold makes those look easy, whipping the ball beyond Allan McGregor with ease. After all the focus on his defensive weaknesses, this was a reminder that he is a player who can do things that other players cannot.

It blew Rangers' game-plan apart. Confidence had been restored by a healthy victory over Hearts but memories of those heavy defeats to Celtic, Ajax and Napoli would have lingered. Would this team wilt again when up against a higher class of opponent?

Jurgen Klopp made three changes to the team that drew at home to Brighton as Luis Diaz, Darwin Nunez and Diogo Jota came in for Fabinho, Fabio Carvalho and Roberto Firmino.

Rangers made four changes to the team that put four past Hearts live on Sky Sports. Antonio Colak, who scored twice in that game, dropped out for Alfredo Morelos. Steven Davis, Malik Tillman and the teenager Leon King also came into the team.

They were able to hang in there but the chances kept coming for Liverpool with most of them seeming to fall to Nunez. It has been a moderate start to his Liverpool career since joining from Benfica in the summer but his movement was on point here and he looked a real threat.

What his performance lacked was a goal. Perhaps he should have done better when firing his shot too close to McGregor from the left channel but that galloping stride ensured the next opportunity was never far away. Rangers simply could not cope with him.

It was Diaz instead who opened up the away side to fashion the second, darting between defenders before being brought down by King. Salah stepped up to take the penalty and went down the middle when McGregor dived left for his fifth goal of the season.

It was a chastening defeat for Rangers, the gulf illustrated by the fact they did not muster their first shot on target until Antonio Colak tested Alisson inside the final five minutes. For Liverpool, for Alexander-Arnold, it was just the sort of night that was needed.

“The gap between the two sides was huge. The gulf in class was massive all over the pitch. It was very, very comfortable for Liverpool.”

Even before the ball had been struck, there was a sense around Anfield that this was heading for the corner. Such is the confidence in Alexander-Arnold with time to pick out his spot. It showed his quality and put the focus back on his tremendous talent.

And yet, maybe this is a dance that we are destined to do throughout his career. Liverpool's dominant display against Rangers did not test Alexander-Arnold defensively and it is on that aspect of the game that the criticism is focused. This told us nothing new.

What it did highlight once more is that this is a special player, one who can win games for one of the best teams in the world from full-back. He might have had an assist too had Virgil van Dijk not glanced his header wide. He left to a standing ovation. It was deserved.

"It was the game that we wanted to play, a really good defensive performance in the new structure," said Klopp.

"The goalie made some good saves, we missed some. The two goals we scored were really nice. In the end, Rangers came up a little bit but it was one situation really where Ali had to make a save."

Liverpool have faced criticism after a slow start to the Premier League season that has left them 11 points behind leaders Arsenal already but the manager saw positive signs here.

"The criticism is completely fine. We are not over the moon about our situation but we played some really good games not so long ago and Champions League games at Anfield are usually enjoyable," he added.

"I saw a team tonight that is fully committed and that is what I liked." 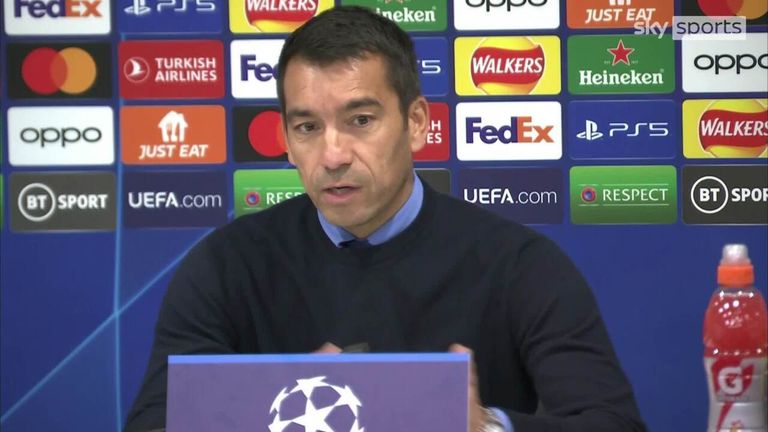 "We knew it was going to be a very difficult game," said Van Bronckhorst.

"The threat they had, players making runs almost every time. The plan to play five at the back was a good one to narrow those spaces.

"In the first half we were still in it, only one goal. We picked the moments much better in the second half when to go up the pitch and cause pressure to them. Those moments were more frequent. But it is always disappointment to lose two goals to set-pieces.

"We had chances to make it 2-1. Antonio has a chance, maybe he should have taken it earlier. But the level we face is very high and our level was not good enough tonight."

The return fixture between Rangers and Liverpool at Ibrox follows the weekend games on Wednesday October 12; kick-off 8pm.