Liverpool surrendered a three-goal lead but eventually prevailed 4-3 against a resolute Red Bull Salzburg as Jurgen Klopp's side kick-started their defence of the Champions League in chaotic fashion at Anfield.

The hosts appeared to be cruising after Sadio Mane's ninth-minute opener was followed by a fine second from Andrew Robertson (25) and Mohamed Salah's tap-in (36), but Hee-Chan Hwang reduced the deficit before half-time (39).

Within 15 minutes of the second period, Salzburg were level as Takumi Minamino's fierce volley (56) was added to by substitute Erling Braut Haaland from close range (60).

Man of the match: Andrew Robertson.

Klopp knew his side needed to make a statement after a below-par performance resulted in a 2-0 defeat against Napoli a fortnight ago, but this was far from a routine night for the holders' first Champions League appearance back at Anfield since lifting the trophy in Madrid last May.

Mane got things rolling as he started and finished the move to break the deadlock against his former club. The Senegalese, who scored 31 league goals in 63 appearances for the Austrians over two seasons, cut inside Rasmus Kristensen and played a sharp one-two with Roberto Firmino before slotting the ball past Cican Stankovic inside the opening 10 minutes.

The 27-year-old did not celebrate his goal, but that was not the case 16 minutes later as Liverpool showed just why they will once more be among the favourites to win this competition by scoring a brilliant second from a sweeping team move.

Robertson began with the ball in his conventional left-back position, but the Scotland international continued his run into the box, and when Jordan Henderson fed Trent Alexander-Arnold down the right, he found Robertson free from Jerome Onguene at the near post for a striker's finish.

Liverpool were cruising when Stankovic's parried Firmino's header into Salah's path for a simple third, but complacency then took hold of the hosts.

Joe Gomez was recalled to the starting line-up to cover for the injured Joel Matip. The 22-year-old's inclusion was the only change from Saturday's win at Sheffield United.

Salzburg's teenage goalscoring sensation Erling Braut Haaland was only fit enough for a place on the bench after missing the last two matches with illness.

The last time that Liverpool invited Austrian visitors to Anfield was back in August 2004, losing to Graz AK on the night 1-0 but prevailing 2-1 on aggregate on their way to winning the final against AC Milan - but it was Salzburg who channelled their inner Istanbul.

Hwang had already caused Joe Gomez problems on his return to the side, but the South Korean cut inside Virgil van Dijk to slam the ball beyond Adrian to give his side a foothold in the contest. The Anfield scoreboard inadvertently flashed up 3-3, but it would prove an omen for what was to come after the break.

"Even though we were down 3-0, you could see us coming into the game more," said Salzburg boss Jesse Marsch afterwards.

"The goal just before half-time was really big for us, because it gave us the chance to go in and talk about a few things and then come out and push as hard as we could."

Salzburg carried out those instructions emphatically as Patson Daka narrowly failed to intercept a sloppy clearance from Adrian, but Hwang then turned provider as his pinpoint cross was volleyed home by Minamino.

Dominik Szoboszlai was then hesitant with his shot when put through by the impressive Hwang, but Liverpool's reprieve was short-lived as Haaland took advantage of gaping holes in the Reds' defence to tap in Minamino's cross for his 18th goal of the season.

However, Salzburg were level for only eight minutes as Salah resumed normal service with an instinctive finish from Firmino's flick, as Liverpool avoided an almighty scare.

Liverpool boss Jurgen Klopp: "There are teams that maybe break down after 3-0 at Anfield but they were not really bothered. We opened the door and they were running through. We tried to adjust at half-time but all their goals came from our passes.

"We lost the ball easily so it was a very important lesson for us tonight. But I prefer to learn it in the game than afterwards. Were we to have lost 4-3, it would still be the same lesson. So it's good that we learn the lesson having won.

"I knew before we needed to improve a lot, but everyone knows it now probably." 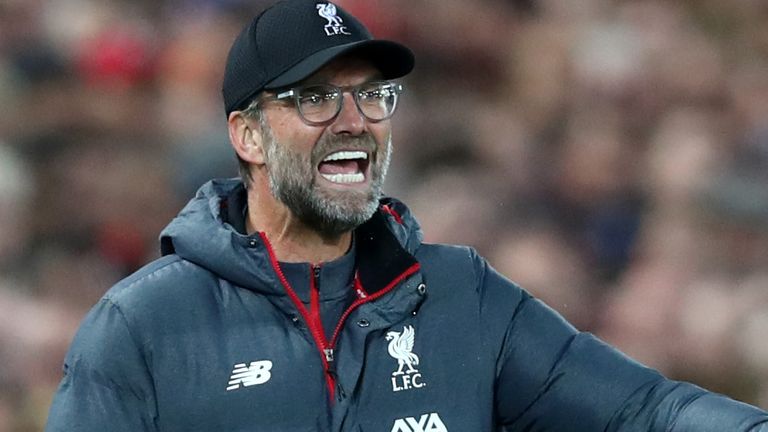 Salzburg boss Jesse Marsch: "At 3-3, you know our guys have put a lot into it, and they're a little bit tired, the energy in the stadium picked up a little bit, and it's an incredible team we're playing.

"But I'm really proud of my group and it's important that we learn from this loss so we find a way to get through the group." 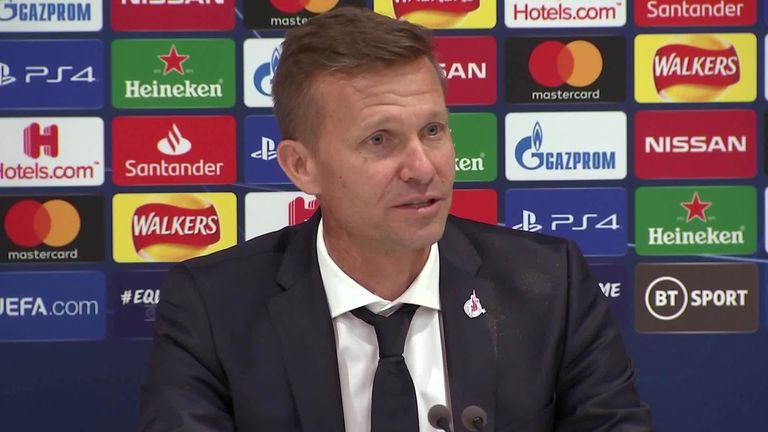 "What went wrong? Complacency is the first thing that I'd say. There was some absolutely wonderful football in that first half by Liverpool and they fully justified their lead. But then they lost the goal just before half-time and it gave Salzburg a bit of a lift.

"Liverpool came out for the second half very sloppy. They were moving the ball very quickly in the first half but that didn't happen [in the second half]. You could feel that momentum shifting. You could sense it with the crowd. Salzburg deserve a lot of credit.

3 - Liverpool have conceded three goals in a home Champions League game for the first time since October 2014, when they lost 3-0 to Real Madrid. Stunned. pic.twitter.com/yE3Pbr9SXS

"I think this was a little bit of a warning sign. Klopp didn't look happy on the touchline at all, with how sloppy it was.
I think you're seeing a Liverpool team who, even when they're maybe not up to scratch, they can still find a way to win matches.

Man of the match: Andrew Robertson

Robertson became the first Scotsman to score for Liverpool in UEFA European competition since Gary McAllister was on target against Alaves in the 2001 UEFA Cup final - and it was some finish from the full-back, who continues to add qualities to his repertoire.

The 25-year-old won the man-of-the-match accolade for his first-half performance alone. During a match that was littered by mistakes from both sides, it was Robertson who stood out as the one consistent performer, making more passes (108) than any other player and three crosses.

With England's squad being announced on Thursday for the forthcoming Euro 2020 Qualifiers against Bulgaria and Czech Republic, the injury to Joel Matip had come at an opportune moment for Joe Gomez.

The 22-year-old began nervously, conceding possession on a couple of occasions in dangerous positions, but the young defender improved as those around him became increasingly complacent.

By the end, no player had made more tackles (6), more interceptions (4) or gained possession (15) more times than Gomez as he overcame those understandable signs of rustiness.

With John Stones injured and Michael Keane out of form, Southgate will be keen for Gomez to be handed more game time at Anfield, but on this evidence, Klopp will be eager for Matip to make a swift return.

Without his calming presence alongside him, Van Dijk was at times made to look ordinary by Hwang and Minamino - and with the Dutchman irreplaceable, that could ultimately force Southgate to look elsewhere for Harry Maguire's partner at the back.

The stats amid the chaos

Liverpool return to Premier League action on Saturday with the visit of Leicester to Anfield - kick-off is at 3pm. The Reds next play in the Champions League on Wednesday October 23, away to Genk.