Liverpool 2-1 Tottenham: Reds fight back in second half to regain six-point lead 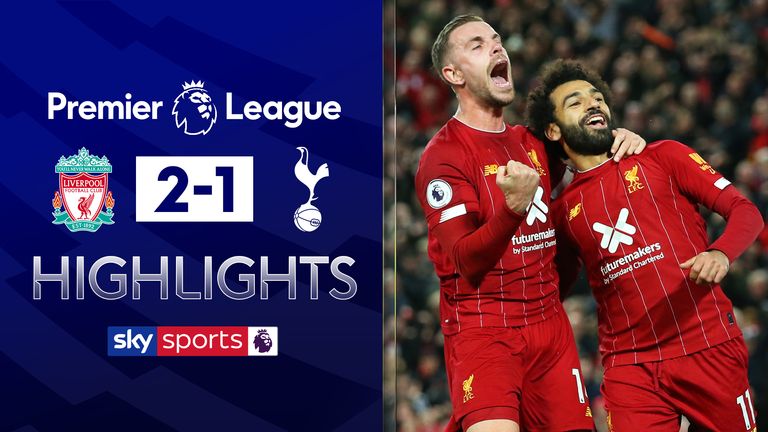 Liverpool regained their six-point lead at the top of the Premier League as they came from behind to beat Tottenham 2-1 in a pulsating affair at Anfield on Super Sunday.

Spurs took a shock lead after just 47 seconds through Harry Kane's intuitive header, while Paulo Gazzaniga was forced into several fine saves as Liverpool laid siege on the visitors' goal.

Heung-Min Son hit the bar early in the second half after rounding Alisson, but Liverpool levelled through Jordan Henderson's half-volley from an angle (52).

Liverpool's comeback was complete when Serge Aurier kicked the back of Sadio Mane's leg in the box, allowing Mohamed Salah to slot home the penalty (75) for a deserved victory.

The result means Liverpool remain unbeaten, while Tottenham are down in 11th after just one win in five, and without a league away win since January.

How Liverpool powered through at 100mph

Just as in the Champions League final between these two sides in June, the first major incident came in the opening minute. Spurs, without a Premier League away win in 280 days, took the lead as Son's shot deflected off the head of Dejan Lovren and against the post, only for Kane to cleverly stoop low and head into the corner from six yards.

Anfield got anxious - the visiting players were jeered for time-wasting from the fifth minute - but after Kane's volleyed cross-shot flew just wide, Spurs retreated and Liverpool considerably upped the tempo.

Spurs registered just 24 per cent possession for the rest of the half and allowed Liverpool a flurry of opportunities, the first falling to Salah, whose clever touch and shot forced Gazzaniga into a fine parried save, before blocking Roberto Firmino's rebound from an angle.

From Trent Alexander-Arnold's wicked free-kick moments later, Virgil van Dijk had his head in his hands after Gazzaniga tipped over his header from point-blank range, and Spurs' No 2 goalkeeper was then called into another fine stop, touching wide Alexander-Arnold's long-range piledriver.

Mo Salah started after missing their draw with Manchester United last weekend, with Dejan Lovren the other returnee from that game in Joel Matip's absence.

There were two changes for Tottenham too from last weekend's draw with Watford. Christian Eriksen didn't even make the squad that day but was back for his first appearance in three games, and Heung-Min Son also returned for Lucas Moura after a stellar performance in midweek.

Mane then headed wide unmarked from 10 yards, and Spurs somehow saw out the rest of the half. But they could have been two ahead just minutes after the restart as an uncomfortable Lovren was beaten in the air, only for Son to round Alisson and hit the bar from an acute angle. It was a costly miss.

Liverpool got back on terms as Fabinho's dinked ball into the box found Henderson free at the back post, and his half volley with the outside of his left foot somehow beat the crowd and found the far corner.

The opportunities kept coming for Liverpool, but they were more half chances, as Salah tried everything he could to get the winner, but from distance.

The Egyptian got the decisive goal from 12 yards, but he had his team-mate to thank. After chasing down a long ball and losing out to Aurier, Mane cleverly put his foot in front of the Ivorian's backswinging boot, and was subsequently caught for a penalty. Salah made no mistake, slotting into the bottom right corner as Gazzaniga stood still.

Spurs reacted well and had chances to level; Danny Rose sliced wide from a good position on the stretch 15 yards out, and Alisson then did well to hold Son's shot from the edge.

As full-time went, the often-explosive Jurgen Klopp tempered his celebrations as he approached the Kop, knowing that a six-point lead going into what he calls the "hardest period" is good, but can diminish in weeks. 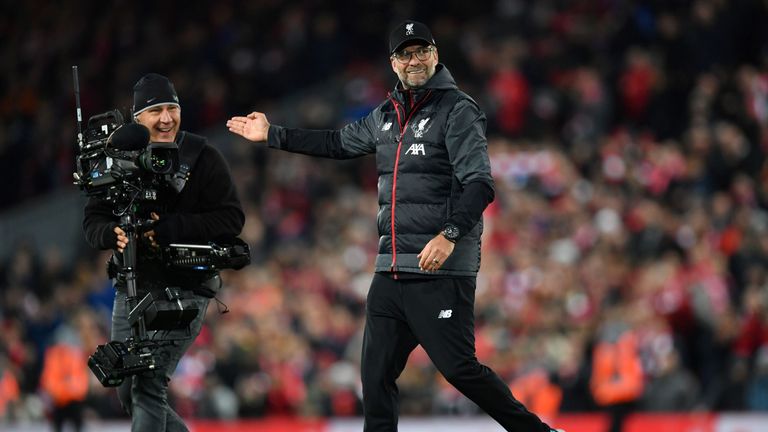 Jurgen Klopp hailed his Liverpool side's performance and comeback, claiming they were at their best in the win

Liverpool boss Jurgen Klopp: "It was a super game, I loved it. That was us at our best. That's how football should look, how we should play against a strong, organised side, with the threat that every ball you lose could end up in front of your own goal.

"The counter-press was exceptional, we wanted to be really special and strong in that department. I loved that, it was really, really good. We won it, and we deserved it, and I'm really happy about the performance."

Tottenham boss Mauricio Pochettino: "We are going to keep going, stay positive, step-by-step. We have the belief, and the confidence, but we didn't find a way to keep the possession.

"A lot of positive things to take. It's difficult to say it's a step forward because we lose the game, but yes, the way the form was in the last few months, it was a small step improving against the best team in Europe."

Jamie Carragher: "Liverpool were just the better team. They just steamrollered them. That's a Liverpool performance, that. Man City don't win games like that, Man City win games differently, and actually look better on the eye."

Gary Neville: "I thought during the second half about the teams we played in at Manchester United. There's a complete trust in the crowd in this team. They're brilliant to watch, the football's scintillating, and they've played title-winning football for two years now. You can't compare them with City, they're a completely different team."

Roy Keane: "Man City put Liverpool under pressure by getting a good result and Liverpool obviously responded. That is the name of the game, you have to keep winning. They had the disappointment with the setback, but you keep going.

"Nobody hands you the championship, you have to earn the right, week in, week out, whether you play well or not. They ground out a result as Tottenham gifted them their goals with poor defending. But overall, over the course of the 90 minutes, they were the better team.

"And do you know what - I probably should not say these words, but they played like champions, responded really well and were far the better team."

You know what - I probably should not say these words, but they played like champions

"[Titles] shouldn't be something they're scared to talk about! I'm always surprised when I hear players getting interviewed saying we don't really talk about it... They should! At a big club like Liverpool you should be expected to talk about winning titles."

Graeme Souness: "That is what the best teams do. They grind you down, and they find a way to win games even if they're not at their very best."