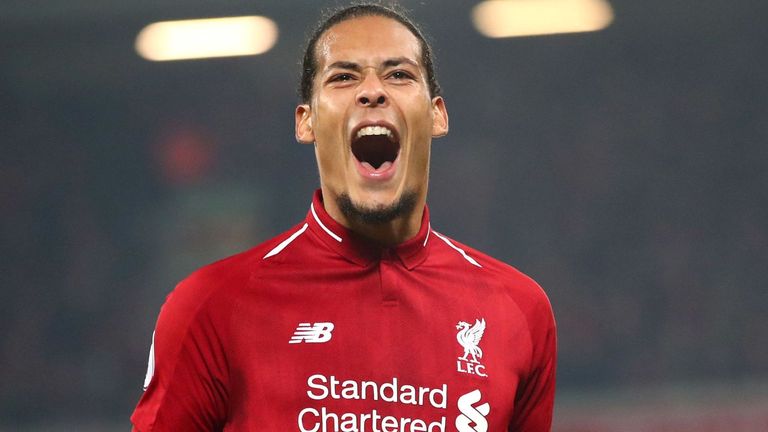 Sadio Mane and Virgil van Dijk both scored twice as Liverpool returned to their fluent best with an impressive 5-0 victory over Watford.

The Premier League leaders raced into a 2-0 lead thanks to Mane's double in the opening 20 minutes, the second a brilliant backheel from the penalty spot.

Divock Origi, starting only his second league game of the season, added the third in the 66th minute with a low strike.

Van Dijk then headed in twice in the space of three minutes as Liverpool recorded their biggest victory of the season to stay a point clear of Manchester City at the top of the table.

Liverpool's title bid has been dented in recent weeks with three draws in their last four league matches, but this was the perfect response against obliging opponents - as well as the ideal way to warm up for the Merseyside derby against Everton on Sunday, live on Sky Sports.

Watford had conceded 11 goals on their previous two visits to Anfield and they were soon facing an uphill task again as Mane netted twice inside the opening 20 minutes.

Starting in a central position in the absence of the injured Roberto Firmino, Mane opened the scoring in the eighth minute when he headed in from Trent Alexander-Arnold's cross.

Alexander-Arnold and Mohamed Salah tormented Watford's left flank and it was no surprise that the former was involved in Liverpool's second goal in the 20th minute.

Alexander-Arnold crossed into Mane, whose first touch took him away from goal, but with his second he finished with a superb backheel that bounced over Ben Foster.

Liverpool looked rampant against a flimsy defence, with Salah hitting the inside of the post and Fabinho firing a powerful effort over from 25 yards out.

Watford did threaten late in the first half but Troy Deeney turned wide from close range after being picked out by Gerard Deulofeu's low cross.

Liverpool added a third in the 66th minute when Origi cut in from the left and hit a low shot that beat Foster at the near post.

Substitute Andre Gray almost pulled a goal back for Watford as he saw an effort pushed away by Alisson, before the goalkeeper diverted a volley from Gray over the bar from point-blank range.

Liverpool made two changes from their draw at Manchester United as Alexander-Arnold and Origi replaced Henderson and Firmino. Watford stuck with the same XI that won 5-1 at Cardiff.

But Liverpool had the final say as Van Dijk headed in from Alexander-Arnold's free-kick and then nodded in from Robertson's cross a few minutes later.

Alexander-Arnold and Van Dijk were both excellent, but Mane set up the win with two early goals. Playing in a more central position than he normally does, Mane made a good run for the first goal between Watford's centre-backs, and then produced a brilliant backheeled finish to extend Liverpool's lead.

Liverpool make the short trip to Goodison Park to face Everton in the Merseyside derby on Sunday, live on Sky Sports. They then host Burnley on Sunday, March 10.

Watford are at home against Leicester on Sunday, live on Sky Sports, and then travel to Manchester City on Saturday, March 9.