Report and highlights as Livingston move within a point of Scottish Premiership top half with 2-1 win over Aberdeen as Ayo Obileye and Alan Forrest strike; Christian Ramirez pulls one back before Christian Montero's late red card 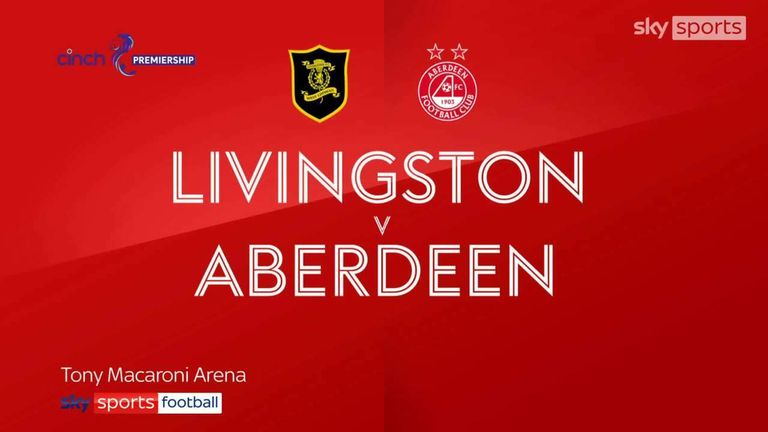 Highlights of the Scottish Premiership match between Livingston and Aberdeen

Livingston earned a hard-fought win 2-1 win over Aberdeen thanks to goals from Ayo Obileye and Alan Forrest.

Centre-back Obileye has become a goal-scoring machine lately, and he fired the Lions ahead after getting on the end of Bruce Anderson's effort before Forrest's lob doubled their advantage after a quickfire start to the second half.

But an improved display from the visitors aligned to Livingston becoming careless which saw Aberdeen grab one back through Christian Ramirez in the 66th minute.

The victory moves Livingston level with Aberdeen in the cinch Premiership.

It was an ideal start for the hosts as they stormed ahead inside eight minutes.

Anderson managed to fashion a half-chance from a corner after keeping the ball alive and his goalward effort found Obileye, who reversed the ball beyond the deputising Gary Woods with an intelligent flick.

Lewis Ferguson had a strong claim for a spot-kick when he appeared to be pulled down by Nicky Devlin after making a run across the front post but referee Kevin Clancy remained unmoved.

The home side looked to double their lead after 23 minutes when Christian Montano cut in from the left-hand side before arrowing a speculative effort straight at Woods.

The game burst into a brief bit of action after a slight lull as Forrest intercepted an under-hit Johnny Hayes pass and went agonisingly close to a second for Livingston as his shot from distance went narrowly over the bar.

Livingston started the second half on the front-foot and doubled their advantage after 49 minutes when Forrest beat the offside trap and latched onto the end of a Montano's through ball before coolly dinking the ball over the outrushing Woods.

It was almost 3-0 minutes later as a well-worked move from the home side saw Jason Holt's curling effort tipped onto a post by Woods at full stretch.

The Dons were given a lifeline after 66 minutes.

After the chance looked to have gone, the ball was hoisted into the box by Hayes and Ramirez showed some tremendous acrobatic skills to divert the ball beyond Max Stryjek and into the top corner.

Ramirez's equaliser sparked some life in the visitors as they began to show some serious attacking impetus.

Ferguson spurned a gilt-edged chance to level the game as his header from point-blank range was brilliantly tipped over by Stryjek.

Livingston were reduced to 10 men after Montano was adjudged to have pushed an opponent to the ground. It was a fiery encounter throughout, with 12 yellow cards and a red being dished out by the ref throughout the afternoon.

Former Lions centre forward Jay Emmanuel-Thomas came off the bench and almost made an instant impact as his powerful strike was blocked on the line by a sea of Livingston bodies before Stryjek recovered to punched it clear.

Livingston head coach David Martindale was left astounded that his side ended up with nine yellow cards, saying: "I'm delighted with the three points. I'm still trying to get my head round how there could be 13 yellow cards in that game. It's incredible. Are you not allowed to tackle anymore?

"I can't believe we walked off the park with eight of my players booked, maybe nine because Christian is a double yellow. For the life of me, I can't get my head round it.

"I think with Christian's second he gave the referee a decision to make. He put his hands on the player and it's a bit of sportsmanship.

"I think he has been naive, especially after I spoke to the boys at half-time and told them they had to watch out because four of them were on yellow cards.

"Aberdeen do that side of the game very well. I'm not saying it's cheating; I don't mean that at all.

"Christian was a little bit naive because you can't put a hand on an opponent when you're on a yellow card."

Aberdeen manager Stephen Glass was left disappointed with his side's performance, saying: "It was poor. We didn't start playing until we were 2-0 down then we showed a reaction that should've been there from the start.

"The amount of effort that went in after going 2-0 down is the standard that's expected at a minimum but you can't wait till that stage against anyone.

"The last half-hour masked our deficiencies, the approach wasn't good enough until that point. The mentality of a top player is that the game's on the line from the start.

"I don't feel the season's running away from us. As poor as we've been, we're fortunate the teams around us aren't winning games either. A lot of teams will be in the same boat as us, thinking they should be doing better."

Livingston travel to Ross County on Wednesday - kick-off 7:45pm - while Aberdeen host Celtic on the same day, also at 7:45pm.