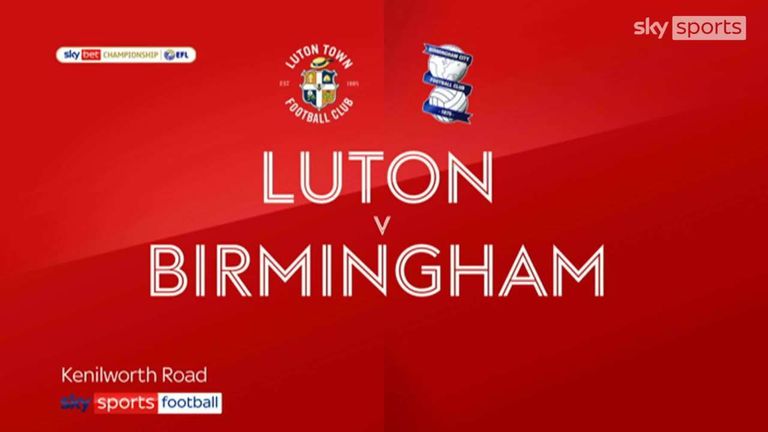 Highlights of the Sky Bet Championship match between Luton and Birmingham City.

Birmingham striker Scott Hogan scored a brace to earn his side a thumping 5-0 win at Luton.

Luton threatened when James Bree's free-kick was parried by Matija Sarkic, the keeper then getting up to block Tom Lockyer's follow up.

But Blues led after seven minutes when Roberts beat Elijah Adebayo to a corner and powered his header beyond Simon Sluga.

The Hatters almost levelled but Harry Cornick's cross was just over the head of Admiral Muskwe at the far post before Amari'i Bell tried his luck from 35 yards, with Sarkic unable to hold and just getting to the loose ball ahead of the onrushing Lockyer.

Although looking the better side, Luton fell further behind after 26 minutes as the hosts could not clear their lines and Tahith Chong's cross met by Hogan, who cleverly directed his header into the net.

Town boss Nathan Jones responded by taking off Peter Kioso for Glen Rea as the Hatters looked to pull one back before the break, Muskwe's touch just letting him down as he tried to burst through.

If anything, it was the Blues who went closest, Chong testing Sluga with an angled drive and Pedersen slicing off target with the last action of the half.

The game appeared to be up just two minutes into the second period as from a Luton corner the visitors broke with Chong speeding away through the middle.

Although Pelly-Ruddock Mpanzu managed to get back and make a covering tackle, the ball ran through to Hogan who had the easiest job of tapping into the empty net for his second of the afternoon.

Ivan Sunjic wasted a good chance to make it 4-0, shanking wide from the edge of the box, while Chong tested Sluga from range, the keeper gathering comfortably.

Bree sent in a dangerous free-kick that no team-mate could reach while Kai Naismith did well to block Ivan Sanchez's effort.

Chuks Aneke's downward header flew narrowly wide for the visitors and Town sub Cameron Jerome couldn't get his effort on target from another good Bree set-piece.

Sluga prevented Aneke from adding a fourth with eight minutes left but substitute Gary Gardner did just that after 85 minutes, arrowing into the top corner with virtually his first touch.

It then became a real humbling with two minutes to go, Jeremie Bela being left unmarked at the far post and his shot was turned in by a prostrate Aneke for a fifth.

Luton's Nathan Jones: "I'm really disappointed, a little bit embarrassed by the scoreline and the level of performance but I don't often get that from this group in terms of being embarrassed.

"I'm always proud of them, they give me everything, today we shot ourselves in the foot from early on. We conceded from a set-play which we did last weekend as well, it sets you back. Ironically we started the game so well on Tuesday (against Barnsley), we wanted to continue that, but we didn't do the basics well enough today and that's what caused us problems. As I said, I'm embarrassed a little bit by the scoreline but we have to learn from that and go again."

Birmingham's Lee Bowyer: "I'm delighted, from start to finish I felt we were the better side, we deserved the win and it could have been more. To come away to a tough place like this, get the three points, but the way we did it as well was excellent.

"In possession, out of possession, the way we moved the ball, the chances we created, the way we defended as a unit, for me that's the best performance I've ever witnessed from any of my teams since I've been a manager."