Report and highlights from the Sky Bet Championship clash between Luton Town and Bristol City at Kenilworth Road as Elijah Adebayo struck midway through the second half to earn victory for the Hatters. 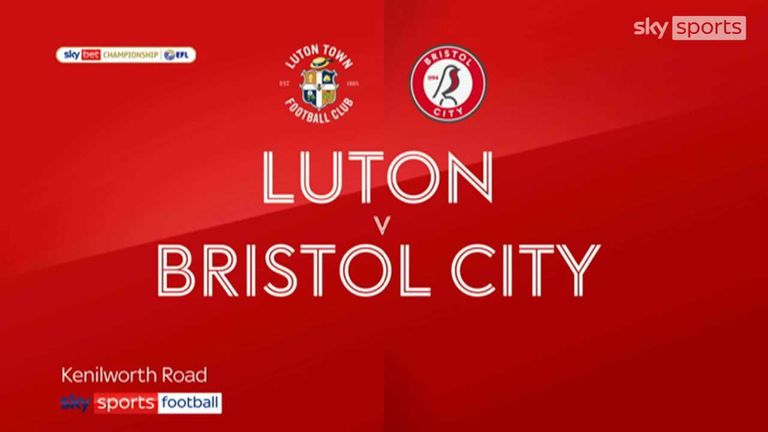 Highlights of the Sky Bet Championship match between Luton and Bristol City.

Top scorer Elijah Adebayo was Luton's matchwinner as his 12th goal of the season earned his side a 2-1 home win against Bristol City.

The visitors went close early on when home goalkeeper James Shea was beaten by an inswinging corner and Kal Naismith did well to head the ball over from underneath his own crossbar.

It was the Robins who enjoyed the better of the early stages and following yet another corner, Han-Noah Massengo drilled over the top from the edge of the box.

Luton finally started to feature as an attacking threat in the final 10 minutes of the first half, winning a number of corners through the hard work of star striker Adebayo.

One of them was swung in by James Bree and Glen Rea met it at the far post only to head disappointingly wide.

Luton did take the lead after 42 minutes from their first effort on target as Bree took a short corner to Naismith and received the ball back, looking up to send over an excellent cross that Tom Lockyer rose highest to power a header past Max O'Leary.

In the second period, Bristol City striker Chris Martin - an ex-Luton player - saw a header loop into the gloves of Shea when under pressure from Naismith.

The Robins were level in the 57th minute when Luton failed to deal with a long ball forward and Andreas Weimann was left in acres of space to go clean through and confidently slip his shot beyond Shea for his 14th goal of the season.

Massengo's fierce drive was deflected over before Luton boss Nathan Jones brought on Fred Onyedinma and his low shot was easily dealt with by O'Leary.

Gabe Osho might have done better with a header from a corner, but Luton were back in front after 68 minutes.

Bree was again the provider, his pinpoint free-kick from the right causing an almighty scramble inside the Robins area and there was Adebayo to fire home his 12th goal of an increasingly impressive campaign.

City looked to hit back for a second time, their main man Weimann spinning inside the area to shoot but his effort cleared the bar, while substitute Nahki Wells was also off target.

Nigel Pearson's side should have snatched a point in stoppage time, though. Weimann put a free header from Cameron Pring's cross away from goal and Wells hit the side-netting from the follow-up.

Joe Williams' side-footed effort was straight at Shea from outside the box as Luton held on to move within six points of the play-offs.

Luton's Nathan Jones: "Performance-wise we're a mile off where we want to be, but we've had so many games and we haven't played well but we've managed to grind out a result. We know we can play better, we know we will play better. We've had to make six changes tonight, most of them enforced and then we've put four or five of them in that haven't played football in six, seven weeks.

"So in that context we're delighted with the win, performance-wise we've got to get better, but it happens. Bristol were probably better than us tonight, and that's not often we can say that to a team that comes here. So they contributed to a good performance, we contributed to a poor performance, but at the end of the day we've gone into the top 10."

Bristol City's Nigel Pearson: "That was a missed opportunity for us. It's happened too often this season and it remains a big frustration for us. It's happening because we can't defend set pieces. We're relying too heavily on one, two or three players winning everything - if they can't then we don't have a collective responsibility. We created the best chances in the game. I can't remember too many attempts on goal or saves that our keeper had to make.

"We've not shown ways of being able to get results in tight games when actually the least we should have got tonight was a point. Luton defended quite well and fill the middle of the pitch. They don't allow you a lot of space. In the second half the game was more open and we created a lot more chances. But it's another game where we've come away with nothing because we're not efficient enough. We can't expect to score two goals every game to get a point."