Report and free match highlights from the Sky Bet Championship clash between Luton Town and Coventry at Kenilworth Road as the Sky Blues came from a goal behind on two occasions to earn a point on Wednesday night. 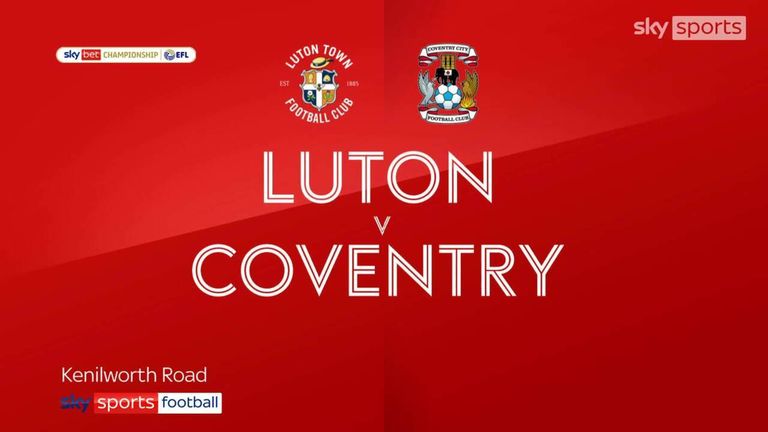 Highlights of the Sky Bet Championship match between Luton and Coventry

Coventry came from behind twice to end a run of four straight league defeats with a 2-2 draw against Luton - only their second point of the season.

The visitors should have got off to a dream start when Viktor Gyokeres outpaced Sonny Bradley to go clean through, but he could only scuff his effort wide with just Ethan Horvath to beat.

Town made them pay in the fourth minute as Harry Cornick hooked a hanging cross into the middle, the ball ricocheted off Fred Onyedinma and Carlton Morris slammed home on the half-volley.

Coventry remained dangerous, though, with Gyokeres placing a free header straight at Horvath before he had the better of the hosts' back-line once again, speeding away from Dan Potts to this time show his predatory instincts and find the net after 11 minutes.

Back came Luton as they went 2-1 ahead with quarter of an hour gone. Cornick's superb through-ball was perfect for Morris to slot into the bottom corner on his left foot.

Still the chances kept coming as Jordan Clark volleyed over the top and Potts saw his close-range attempt repelled by Ben Wilson.

Gyokeres dragged wide from 20 yards as he continued to be a major threat, and after the game had finally started to settle down with goalscoring attempts not quite as forthcoming, Gustavo Hamer chanced his arm from 30 yards just before the break, blasting well over.

On the stroke of half-time, the Hatters almost went further ahead. James Bree's exquisite cross from the right was met by Potts and his glancing header struck the outside of a post.

After the interval, Luton were indebted to a fine save from Horvath as Gyokeres beat Gabe Osho and teed up Jamie Allen but his left-footed effort was tipped over by the USA international.

Sonny Bradley was then needed to make a crucial block as Allen was left free in the area once more, but City were deservedly level after 61 minutes.

Hamer, who had been eager to let fly all night, did so once again and this time got the result he was after, curling a splendid effort past the outstretched dive of Horvath and into the corner.

Onyedinma's attempts to copy the scorer did not come off as Wilson gathered easily, and the visitors might have led for the first time when breaking with pace again but Ben Sheaf stabbed over.

Clark had huge shouts for a penalty waved away by referee Andy Davies in the 82nd minute when his low shot was clearly handled by a sprawling Kyle McFadzean, meaning the hosts are still searching for their first victory at Kenilworth Road this term.

Luton's Nathan Jones: "We had no control in the game. It stemmed from our back three not being dominant enough. All four centre-forwards looked a real handful, ours and theirs, to be fair. We couldn't really get on the front foot and really press, so that caused us a real issue, and every time we turned the ball over they looked a threat, so we had no control really in the game.

Coventry's Mark Robins: "We played well apart from two moments. We gave them two goals and then almost a goal at the end as I've just seen it back and we got away with one there. The first goal, we should have been 1-0 up already, Vik's (Viktor Gyokeres) got in and really he's got to score. He doesn't and then their first opportunity they stick away and we're 1-0 down. It was shades of last year and coming on the back of it can scar you a little bit as a lot of the lads played last season.

"The results haven't been good enough, but we're just giving away some stupid goals. We've got to cut that out, but it's a really good point. We know we could have won, but it stops the rot in terms of the losing streak."