Report and highlights from the Sky Bet Championship clash between Luton Town and Hull City at Kenilworth Road as Elijah Adebayo scored in the first half to seal a narrow victory for the Hatters on Saturday. 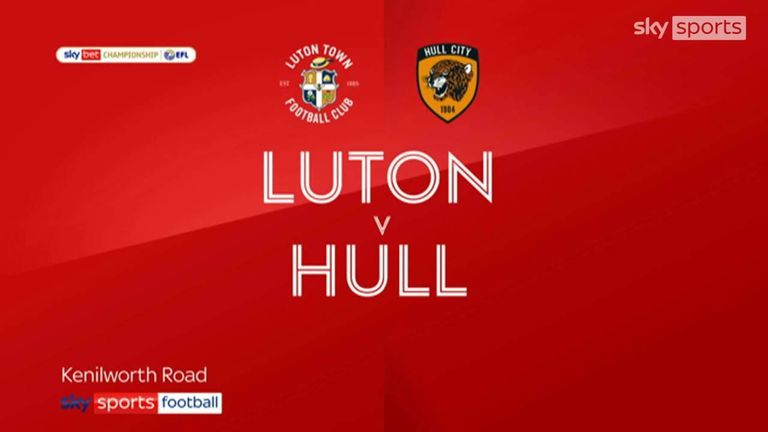 Luton climbed into the Championship play-off places and heaped more pressure on Hull boss Grant McCann with a hard-fought 1-0 win at Kenilworth Road.

Elijah Adebayo scored the only goal of the game to move the Hatters up to fifth in the table.

Hull remained in the bottom three after a third straight defeat.

The Hatters were a whisker away from a fourth-minute lead as Luke Berry's close-range effort hit a covering defender and trickled against a post.

Berry then met a Harry Cornick cross from the right, his looping header easily claimed by visiting goalkeeper Matt Ingram.

The hosts took the lead after 17 minutes when the recalled Fred Onyedinma found some space on the left and crossed to the back post for an unmarked Adebayo to head in a sixth goal in his last seven appearances.

Although never at their fluent best, the Hatters almost moved further in front six minutes before half-time, when keeper Ingram could not gather Onyedinma's cross, but did recover to make a fine save from Glen Rea's deflected follow up.

The Tigers' only moment resembling anything threatening came just before half-time as Mallik Wilks was a willing runner forward but his effort was easy for Simon Sluga to claim.

Adebayo picked up a slight injury in the closing stages of the first period and was replaced by the experienced Cameron Jerome at the break.

Jerome did well to tee up Jordan Clark just before the hour mark, but his low drive was claimed by Ingram with minimal fuss.

Hull brought on former Hatter George Moncur as they pushed for a leveller.

Sluga came off his line to try and gather a ball forward but Keane Lewis-Potter nipped in. Substitute Tom Eaves tried to tee up a team-mate, though, rather than go for goal and Rea got back to make a vital interception.

Lewis-Potter did go for goal himself moments later, slicing badly wide from 20 yards after coming off the left flank to create some space.

Late on, Town defender Amari'i Bell advanced to win a corner on the left and the set-piece saw ex-Hull defender Reece Burke rise highest but fail to get enough on his header.

Luton might have sealed it in the closing stages when Cornick raced through the middle, but he was unable to get the ball under control and City managed to clear.

The Tigers then moved up the other end but midfielder Greg Docherty's cross-shot flashed wide, ensuring the three points remained at Kenilworth Road.

Luton's Nathan Jones: "Let people say whatever they want, we know what we have inside, we know our own ambitions, where we want to be, what we want to do.

"It doesn't matter what people think about us, we have a certain way of playing, a certain way of doing stuff, we have a belief about us that we can do certain things, but we've done nothing yet. It's the third game in a week, we've had two away games again and then coming into the home games, so the important thing today was just to win the game."

Hull's Grant McCann: "We didn't start well, Luton were better than us in the first half, they obviously get their goal and we spoke to the players about you have to start well here. It's a tough place to come and we gave them the upper hand with the goal, and then we're in an uphill battle again.

"We're trying to come back from 1-0 down away from home when we're not doing particularly well as we can do in terms of a goal front in this present time, but in the second half we rallied, kept going, penned them in their half but just couldn't get the goal. It is belief, it's confidence."