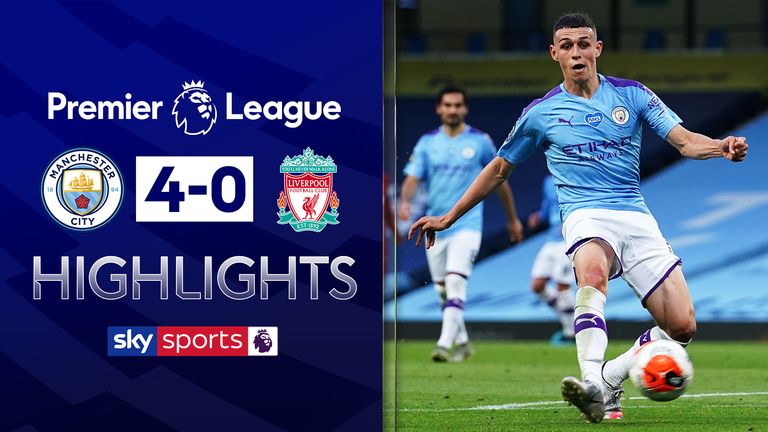 FREE TO WATCH: Manchester City stunned champions Liverpool with a 4-0 win at the Etihad

Premier League champions Liverpool were brought back down to earth as they were thrashed 4-0 by Manchester City at the Etihad Stadium.

City showed respect to the title winners with a guard of honour before kick-off, but it was strictly back to business soon enough as Kevin De Bruyne's penalty put the hosts ahead after Joe Gomez had hauled down Raheem Sterling (25).

Sterling then turned scorer, slotting into the corner from 10 yards after Phil Foden's pass (35), and then Foden got in on the act, rounding off a fine move following a one-two with De Bruyne (45).

Sterling had a say in the fourth as his shot was inadvertently turned home by Alex Oxlade-Chamberlain for an own goal (66), meaning Liverpool were 4-0 down in a Premier League game for the first time since their 5-0 defeat in this fixture in September 2017.

In truth, it could have been an even bigger margin as City, looking to defend their record points haul of 100 from 2017/18, kept Liverpool firmly on 86, with just six games and 18 points left up for grabs. The result leaves the gap between the sides at 20 points.

As is customary in the first game after securing the title, Liverpool were given a guard of honour upon entering the pitch at the Etihad, and in case City needed another reminder who the newly-crowned champions of England were, fireworks were heard outside the ground early on in the game. 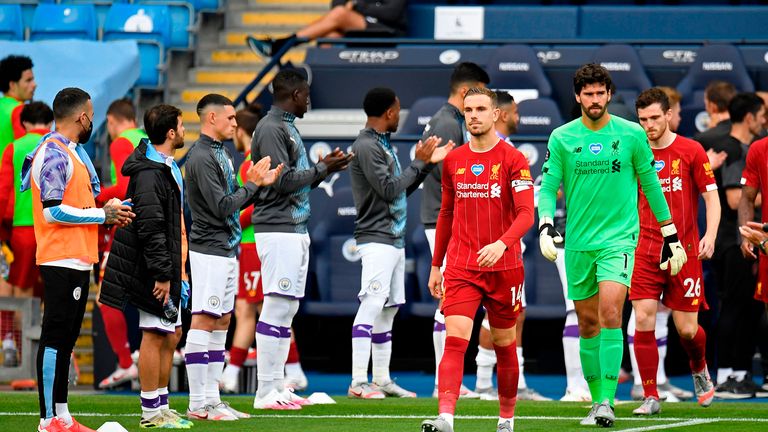 Champions Liverpool were given a guard of honour by Manchester City ahead of their game at the Etihad.

On the pitch, Liverpool had the better of the chances in the opening stages, helped by City's high defensive line. A simple direct ball met Mohamed Salah, whose drive was beaten away by Ederson, before the Brazilian got up to stop Roberto Firmino's rebound.

Salah went even closer shortly after, hitting the foot of the post with a low effort from 15 yards after cutting in from the right, but City took the lead midway through the half and never looked back.

Receiving the ball in the box, the brilliant Sterling rolled Gomez, and the defender's persistence with the arm was deemed unfair as Anthony Taylor pointed to the spot. De Bruyne stepped up and made no mistake for his fourth goal in five games since the restart.

The game was open and frenetic in the first half, but City were the more clinical. Former Liverpool man Sterling doubled their lead as City countered; Foden burst into the box and spread for Sterling on the left, and the forward's first touch was superb, gaining a yard on Gomez before sticking through his legs and into the bottom left corner.

City were putting the pain of losing the title race firmly behind them with each attack, and Foden turned scorer just before half-time, receiving De Bruyne's sumptuous touch from a one-two, and lifting into the roof of the net past Alisson.

"People keep saying Foden is one for the future, but he is one for the present," said Sky Sports' Micah Richards, and the 20-year-old should have had a second, but his effort was cleared off the line by Virgil van Dijk after the break.

Liverpool's defence were all over the place - "They are entitled to a night off," said Sky Sports' Gary Neville - as City formed wave after wave of attack, but it was getting embarrassing as City made it 4-0 midway through the second half.

De Bruyne fed Sterling, whose low shot was heading wide, but it deflected off sub Oxlade-Chamberlain and over the line. It could have been five in stoppage time as Riyad Mahrez found the near post from Foden's through ball, the VAR spotted a handball from Foden in the build-up.

Fireworks were heard again late on, perhaps this time for next season's challengers, and with some City fans billing this as the first game of a new title charge, on that showing the chasm won't be as large as Liverpool are enjoying this term.

Man City boss Pep Guardiola: "We beat the champions, an extraordinary team. We are brave to play, they are brave to play. My team I like every single game. We tried to play football, take risks. The best team I have ever faced in my life at high pressing. 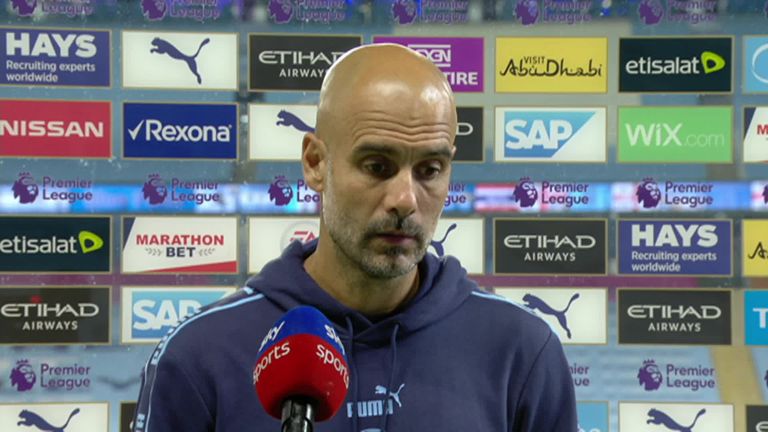 "We had the courage to play in the small spaces. It is important. I saw the guard of honour, how they work inside, how focused they were. They didn't even say thank you because they were focused.

"They drank a lot of beers this week but they arrived here with no beers in their blood which is why I give us a lot of credit."

Liverpool boss Jurgen Klopp: "I like my team how they set up. I think we proved that point. And City proved they are an unbelievably good team. Isn't it nice that another team can be champions even when City is around and plays this kind of football? 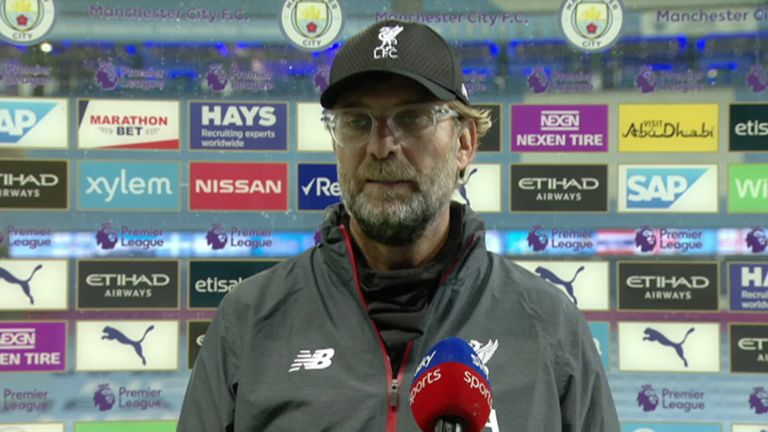 Jurgen Klopp was defensive of his Liverpool side after the game

"City are incredible. I've seen their games - they haven't played a bad game all season. Even when they lost they still played really good football. But in the end the situation is like it is.

"I saw a brilliant attitude. I saw fight. We didn't behave like somebody who became champions a week ago. We lacked fluidity. And in some 50-50 situations they were quicker than us."