Paul Pogba sent off late on for a second yellow, meaning he will miss return leg in Paris

Ole Gunnar Solskjaer lost for the first time as Manchester United caretaker manager as Paris Saint-Germain ran out 2-0 winners in the Champions League last-16 first leg at Old Trafford, with Paul Pogba sent off late on.

After a heated first half, the visitors were clinical with two quick-fire goals; first Presnel Kimpembe turned home at the far post from an Angel Di Maria corner (53), before Kylian Mbappe finished off from another Di Maria assist (60), giving United a huge task to overcome.

It would have been more but for some fine goalkeeping from David de Gea, but matters were made worse when Pogba was dismissed late on for a second yellow card, meaning he will miss the second leg.

United registered just one shot on target as Solskjaer was defeated having gone unbeaten in his first 11 games, meaning an uphill task in the second leg at Parc des Princes on Wednesday, March 6.

There were five yellow cards in a fiery first 45 minutes as both sides cancelled each other out, but the best of the chances did fall to the visitors. Former United midfielder Di Maria curled wide from range early on, before Mbappe slid in to poke wide under pressure from De Gea after being played through on goal by Julian Draxler. 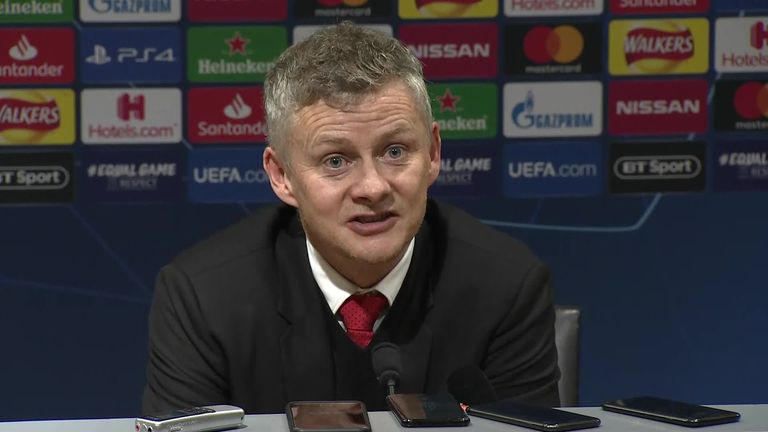 Ole Gunnar Solskjaer says Manchester United were given a reality check by Paris Saint-Germain as they lost 2-0 in their Champions League last-16 first leg.

On a yellow card, Young then nudged Di Maria out of play and into the railings at Old Trafford, prompting anger from the PSG players, but Italian referee Daniele Orsato kept his second yellow card in his pocket on this occasion.

Solskjaer's plans were impacted when Jesse Lingard, just before half-time, and Anthony Martial, at the interval, were forced off with injuries, introducing on Juan Mata and Alexis Sanchez, while De Gea was at his best to turn away Mbappe's header moments before PSG's opener.

PSG were without Cavani, Neymar and Menier, but former United man Di Maria started, with Kylian Mbappe also up front.

Getting on the end of a Di Maria corner, Kimpembe lost Nemanja Matic at the back post before side-footing into the back of the net from close range.

A minute later, Dani Alves' effort deflected off Pogba and inches wide with De Gea rooted, but PSG did get their second as they broke up with the pitch with Di Maria on the left, squaring for Mbappe to simply slot home after beating Eric Bailly to the ball.

None of the previous 34 teams to lose the first leg of a Champions League knockout match at home by two or more goals have progressed to the next round.

It should have been three but for De Gea's clawed save from Mbappe when the Frenchman went through one-on-one again, and the goalkeeper once more kept the score down, beating away Juan Bernat's fierce angled shot.

And there was a late flashpoint as Pogba was sent off for a second booking from card-happy Orsato, who showed 10 yellows overall, meaning United will miss a key man for the second leg in three weeks' time.

Man of the match - Thiago Silva

The Brazilian was a huge part of PSG's defensive solidity on Tuesday, keeping United's pacey attacking threat to a minimum. He made 10 clearances, more than the entire United team put together, and his 90 per cent passing accuracy kept mistakes to a minimum as PSG built from the back.

Manchester United now go to Chelsea in the FA Cup fifth round on Monday night, while Ligue 1 leaders PSG are at St Etienne on Sunday evening. The second leg of this tie will be played in Paris on Wednesday, March 6.