Free match highlights and report as Bernardo Silva and Kevin de Bruyne see off stubborn Burnley; Champions Man City climb to second in the Premier League, a point off leaders Liverpool, while Burnley drop to second from bottom as their wait for a first victory continues

FREE TO WATCH: Highlights from Manchester City's win over Burnley in the Premier League.

Bernardo Silva and Kevin de Bruyne scored in each half as Manchester City eased to a 2-0 victory over a spirited Burnley at the Etihad Stadium.

Premier League champions City had beaten Burnley 5-0 in each of their last four home matches against the Clarets but made hard work of this latest encounter.

Silva converted a close-range rebound to give City the lead on 12 minutes, but the floodgates did not open as they have done previously, and they needed De Bruyne's third goal of the season 20 minutes from time to seal the three points which lifts them up to second in the table.

Things may have been different for Burnley had Maxwel Cornet and Josh Brownhill converted chances to equalise before De Bruyne's strike, but despite failing to claim a first victory of the season, Sean Dyche's side can take heart from the performance into the challenges ahead.

Man of the Match: Bernardo Silva.

City ease past Burnley up to second

Manchester City needed just 12 minutes to break the deadlock. Phil Foden's drive from the edge of the box proved too hot for Clarets' goalkeeper Nick Pope to handle and Silva rifled in the rebound from all of three yards.

Given their recent history at the Etihad, Burnley would have been forgiven for fearing the floodgates would open but were indebted to Pope who prevented Joao Cancelo volleying in a quick-fire second from De Bruyne's lofted diagonal on the quarter-hour mark.

Having regrouped after City's opener, Burnley should have drawn themselves level on 22 minutes when Dwight McNeil released Cornet through on goal, but stand-in City goalkeeper Zack Steffen produced a crucial smothering save.

City were given another reminder of how slender their lead was when Burnley came within inches of equalising 10 minutes before half-time when the Clarets press forced a defensive error and presented Brownhill with sight of goal, but he was unable to register his first Premier League goal as his strike whistled agonisingly wide.

City upped the tempo after the break, laying siege to the Burley goal in the opening exchanges of the second half, but that second goal continued to evade them as Silva curled a shot over and Riyad Mahrez clipped the bar.

Ashley Barnes was introduced on 57 minutes and nearly had an instant impact as City persisted in playing out of the back, but the striker could only scuff a shot into the arms of Steffen with what was his first touch.

With Burnley unable to find a route back into the game, City put it beyond their reach on 70 minutes when De Bruyne lashed an emphatic second into the corner after his cross fell back into his path.

The Clarets felt Mahrez had fouled Ashley Westwood in the build-up, but the goal was allowed to stand, putting an end their hopes of claiming an unlikely point.

9 - Manchester City have won each of their last nine games against Burnley across all competitions by an aggregate scoreline of 32-1. Exhibition. 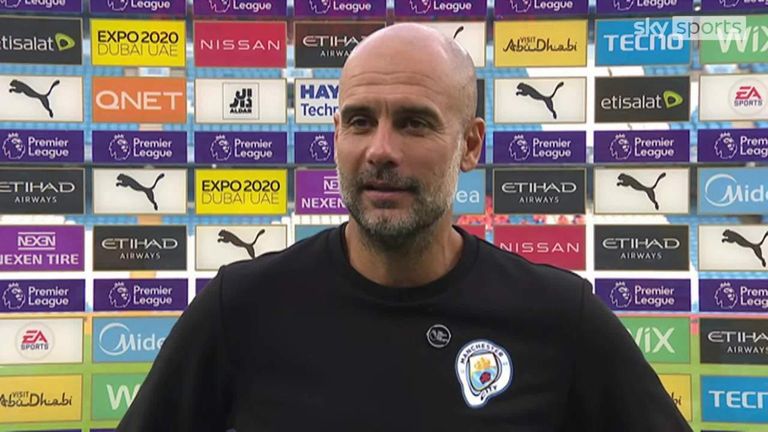 Manchester City manager Pep Guardiola praised his defence and suggested they restricted Burnley to just two chances in the 2-0 win over the Clarets in the Premier League.

Man City manager Pep Guardiola: "My players always play good because they give everything and

they gave it in a difficult game after the international break.

"The performance of Bernardo has been extraordinary again. We are incredibly lucky to have him. He is a joy to have with us and is playing in an incredible top level right now."

"Burnley are organised and you have to adjust and adapt to the way they play. I am so satisfied for the game we played and the victory we got." 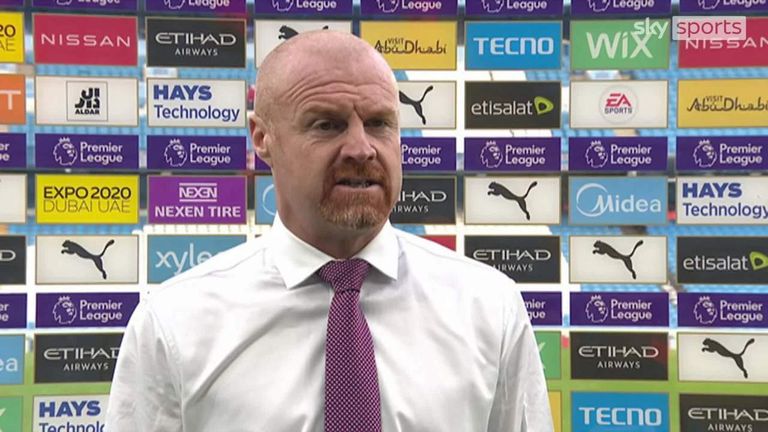 Burnley manager Sean Dyche said he's pleased with how his side performed in the 2-0 defeat to Manchester City in the Premier League but admits his side need to find a way to win when playing well.

Burnley boss Sean Dyche: "It was a better performance here. It's been tough in recent times. We didn't do much wrong but got punished. A couple of moments went against us from them reacting quicker.

"We created some good chances, which isn't easy coming here, and on reflection there are some positive signs.

"We didn't get anything but there are signs the team is heading in the right direction. There is belief around what we are trying to achieve."

Man of the Match - Bernardo Silva.

Bernardo Silva has been directly involved in more Premier League goals against Burnley than against any other opponent (7 in 8 apps - 2 goals, 5 assists).

Manchester City head to Club Brugge in the Champions League on Tuesday at 5.45pm before travelling to Brighton on Saturday Night Football at 5.30pm - live on Sky Sports Premier League. Burnley travel to Southampton on Saturday at 3pm.