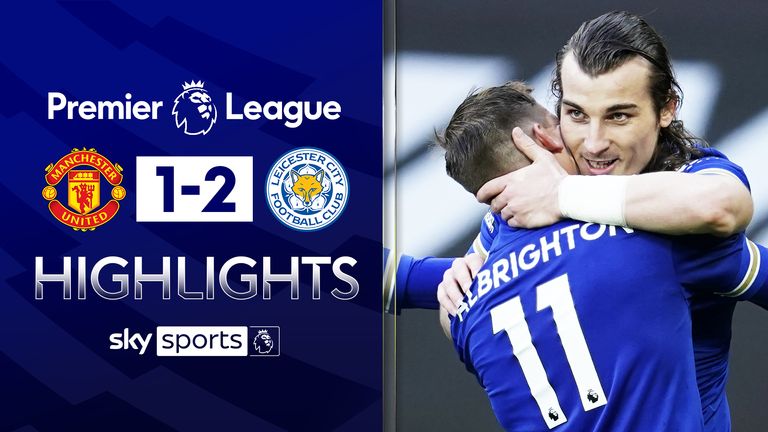 FREE TO WATCH: Highlights from Leicester's 2-1 win over Manchester United in the Premier League

Leicester breathed life into their Champions League qualification bid with a 2-1 victory at Manchester United which confirmed Manchester City as Premier League champions.

Courtesy of their win, Leicester are up to third in the Premier League and will qualify for the Champions League with four more points from their remaining two games.

Ole Gunnar Solskjaer had made 10 changes, but his makeshift United side hit back five minutes later as Mason Greenwood continued his red-hot form with an instinctive equaliser.

Leicester improved drastically in the second half and deservedly regained the lead through Caglar Soyuncu's towering header, and, despite introducing Edinson Cavani, Marcus Rashford and Bruno Fernandes, there was no way back for United.

Man of the match: Caglar Soyuncu.

Fifty hours on from Sunday's win at Aston Villa, Solskjaer handed Anthony Elanga and Amad Diallo their Premier League debuts for Manchester United as he wrestled with a hectic fixture schedule by making 10 alterations.

The unfamiliar United line-up handed Leicester a gilt-edged opportunity to get their bid for Champions League qualification back on track after Friday's shock defeat by Newcastle, and the Foxes made the perfect start inside 10 minutes.

Youri Tielemans sent a deep cross towards Jamie Vardy at the back post but, under instruction from the late-arriving Thomas, he left the ball for the wing-back to rifle an unstoppable volley into the top corner.

Thomas' first Premier League goal looked to have provided Leicester with the platform to push on, but that foundation was ripped from under them as Greenwood continued his hot streak in front of goal.

Premier League debutant Diallo outmuscled Leicester goalscorer Thomas down the right channel, cut back inside and found Greenwood, who unerringly skipped around Soyuncu and picked out the bottom corner of Kasper Schmeichel's set in one devastating movement.

Leicester showed little sign of wrestling back control until they returned from the interval, but steadily ratcheted up the pressure on the United goal. Kelechi Iheanacho was thwarted by David de Gea but the visitors' superiority was soon rewarded.

Solskjaer introduced Rashford and Cavani but the lethal strike duo's first task was to defend a Leicester corner, where Rashford switched off and allowed Soyuncu to head the Foxes emphatically back into the lead.

Fernandes came on with 12 minutes remaining in Solskjaer's last throw of the dice, but despite bringing on players who between them have scored 63 goals this season, United were unable to find another equaliser as Fernandes dragged their best chance wide as City's coronation was confirmed at Old Trafford.

Man of the Match - Caglar Soyuncu

Çaglar Soyuncu netted his first Premier League goal in 44 appearances. He also became the second Turkish player to score vs Man Utd in the competition after Tuncay Sanli in October 2010 and the first to do so at Old Trafford.

Manchester United host Liverpool on Thursday at 8.15pm - live on Sky Sports Premier League - before Leicester travel to Wembley for the FA Cup final against Chelsea on Saturday at 5.15pm.