Mansfield 0-3 Port Vale: Valiants win at Wembley to seal promotion to League One

Report and free match highlights from the Sky Bet League Two play-off final between Mansfield and Port Vale at Wembley Stadium as Darrell Clarke's Valiants were promoted to League One after five years away. 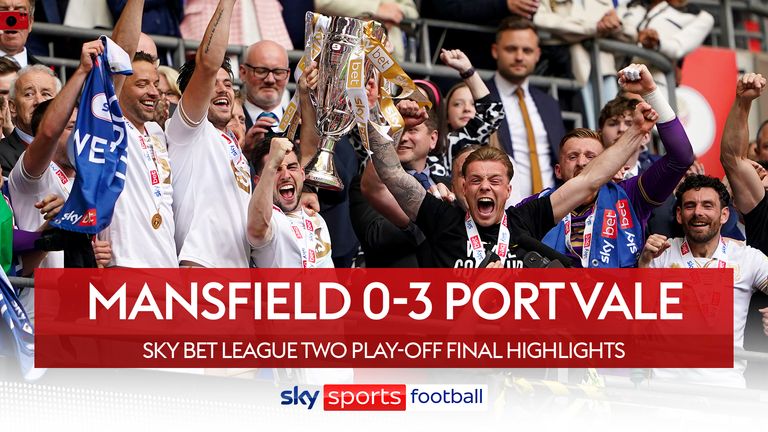 Highlights of the League Two play-off final between Mansfield and Port Vale at Wembley Stadium.

Port Vale sealed promotion to Sky Bet League One as they beat Mansfield 3-0 at Wembley.

Quickfire first-half goals from Kian Harratt and James Wilson set Vale on their way in the League Two play-off final, and a 35th-minute dismissal for Oli Hawkins left the Stags with too much to do to get back into the game. Former Mansfield defender Mal Benning then secured the win with Vale's third late on.

It is a first return to the third tier in five years for Vale. For Mansfield, their wait to return to that level will now stretch from 19 years to at least two full decades by the end of next season.

Vale dominate at Wembley to reach League One

There are so often sliding doors moments in these finals, and this one came so early for Mansfield. After just nine minutes Jamie Murphy was presented with a glorious opportunity to hand his side the lead after James Gibbons had misread a cross - but he was denied by Aidan Stone from close range. 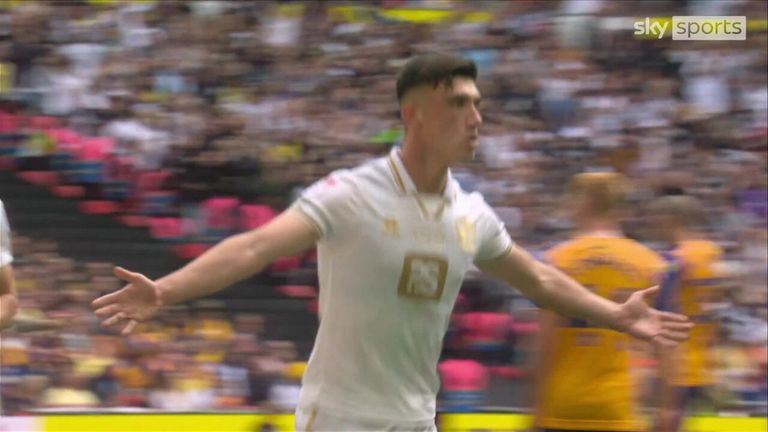 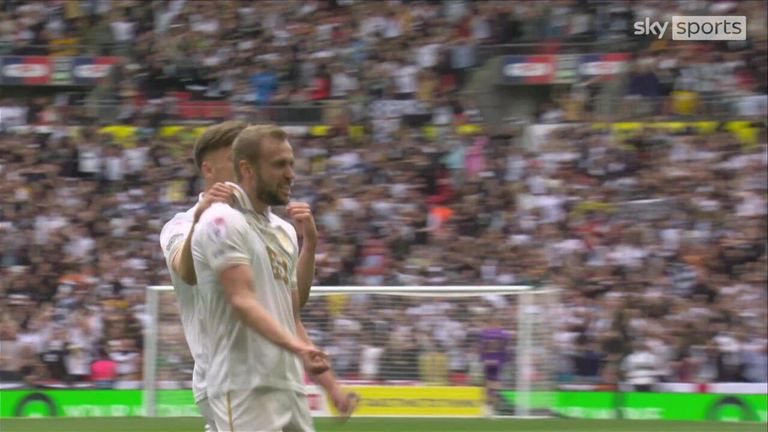 James Wilson is left unmarked at the far post and heads home to give Port Vale a 2-0 lead against Mansfield.

That allowed Harratt the chance to give Vale the lead. Just a minute after he had hit the post with a rasping drive from 20 yards, he did find the goal on 20 minutes as he latched onto Mal Benning's deflected cross to plant a header into the bottom corner.

Four minutes later it was 2-0 as David Worrall's cross from the right was headed onto the bar by Ben Garrity, before the ball dropped kindly for former Manchester United striker Wilson to head in.

The situation soon went from bad to worse for Mansfield. Hawkins, booked just a few minutes earlier, picked up a second yellow for a rash lunge on Wilson - leaving his side with 10 men. 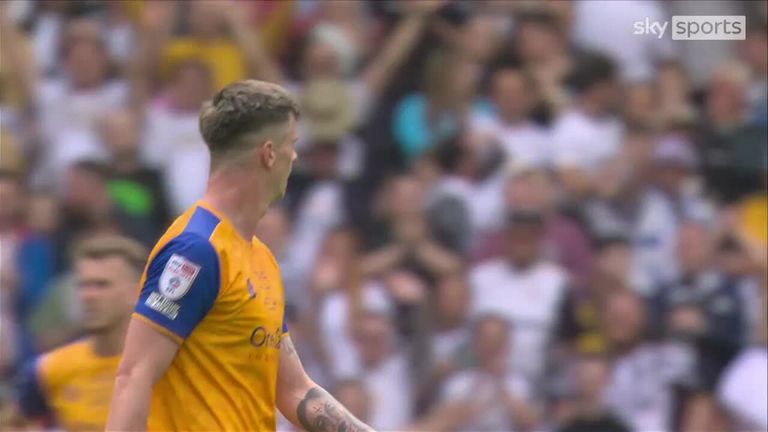 Oliver Hawkins sees yellow for a second time and his League Two play-off final is over.

Mansfield could have got back into it just before the break as a free-kick was spilled by Aidan Stone and landed in the path of Rhys Oates, but his shot was hooked off the line by Connor Hall to maintain Vale's advantage.

There would be no comeback for the Stags, as Benning sealed the game late on for Vale against his old side, volleying home brilliantly from Worrall's cross. 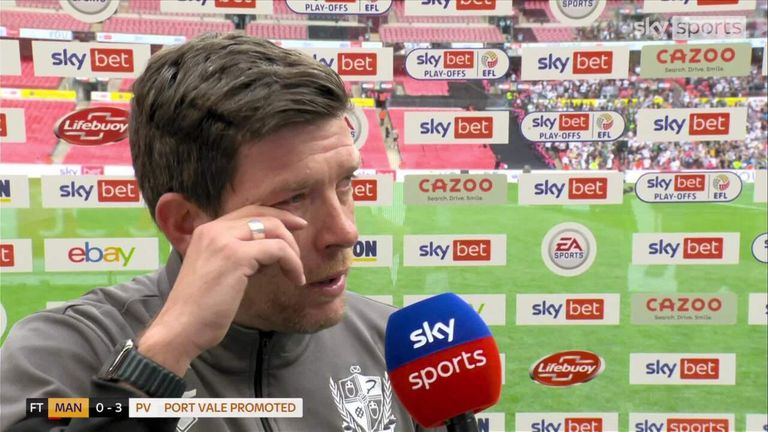 Darrell Clarke, who missed three months of the season after losing his daughter in February, dedicated this win to Ellie:

"For me, this is amazing, absolutely amazing. We stuck together with our belief, togetherness, spirit and desire. I love those lads and my staff. I just thought it was a fitting end. A special mention to my wife and children, my family have been absolute rocks.

"When you're working with fantastic people and owners who give you love and support you want to get back and help. I wanted to be a leader of the group. Andy Crosby my assistant was outstanding while I was gone. This one is for the boys. I'm so happy inside, but obviously heartbroken as well.

"There's nothing wrong with emotion. It's why we love the game. But you've got to control it on the pitch and I thought we were excellent in all departments. To come and win, I'm over the moon.

"I've been in the game long enough to know to never count your chickens. You are obviously delighted to be 2-0 up against 10 men, but they kept going and we needed that third goal to wrap it up.

"You've got to get yourself back up off the canvas. Life is very short. Hang on to your loved ones, enjoy life and be positive." 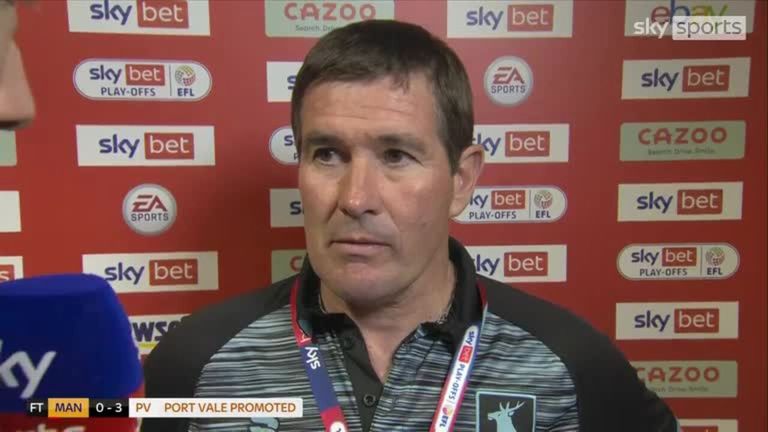 Mansfield manager Nigel Clough admits that Port Vale were worth their victory in the League Two play-off final but rues his own side's missed chances.

"It is difficult at this moment in time, but the best team won. Congratulations to Darrell and Port Vale. We missed a good chances early on and then conceded two. It was fine margins, a deflected cross and one off the bar. Then we missed another good chance and when we go down to 10 men it's game over.

"We are proud of the players and we've had a very successful season, but we just couldn't finish it off and get the job done today. We've fallen just short, so maybe we're not quite ready. There are teams like Forest Green and Exeter who have been trying to get promoted for five years. We've had 12 months.

"We need to use this as an incentive. We don't want to come back here next year because I don't like this place."

'A massive step for Asians in football' 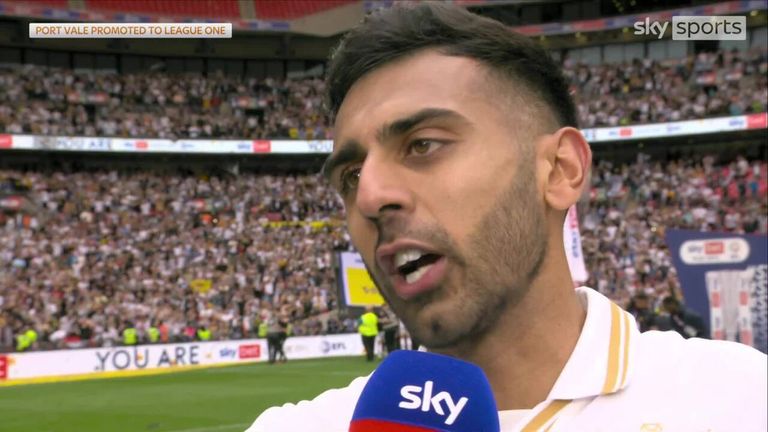 Port Vale's Mal Benning scored their third goal in the 3-0 win in the League Two play-off final victory against Mansfield and described it as an important moment for Asian Football.

"The main thing is we got the win. I'm happy to get the third goal and kill the game off. I talked earlier this week about Asians in football and I don't care it's me, it's not about me, but it's a massive step today.

"I saw it go into the back of the net and I just thought 'I've scored at Wembley'. The gaffer has come back and we've rallied around him and he's rallied around us."

'A real comeback story for Vale' 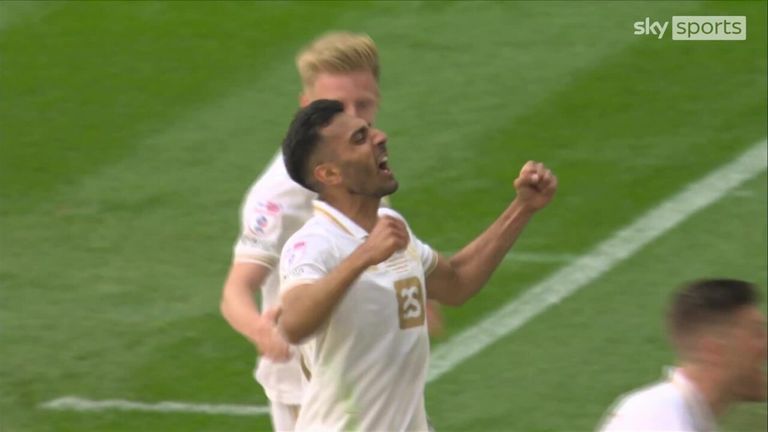 Port Vale's Malvind Benning scores against his old club Mansfield to make it 3-0 in the League Two play-off final.

"Couple with everything we haven't touched on, that is why these moments mean so much because you do have to overcome hurdles, Port Vale more than most this season.

"They got themselves back after a tricky end to the season - that win against Exeter on the last day of the season was absolutely huge - and then to compose themselves and get back into the game against Swindon after going 2-0 down.

"Even in the penalty shootout they missed a few penalties, so it is a real comeback story I suppose - and they have handled it so, so well."

Man of the Match - James Wilson 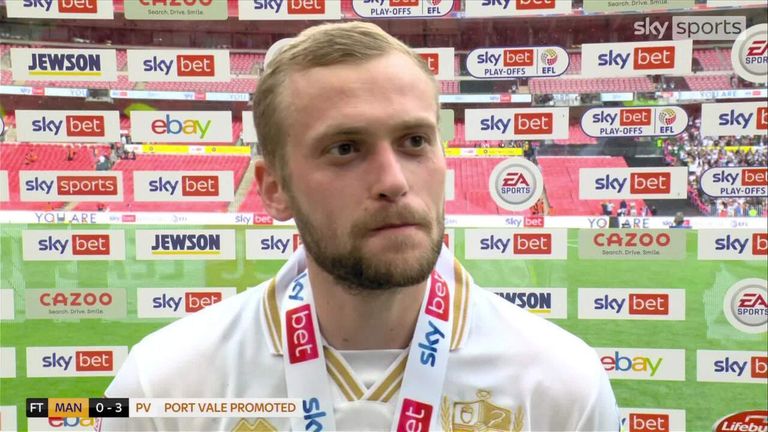 A constant menace to the Mansfield defence. In truth, if injuries weren't a factor it is unlikely that Wilson would be playing at this level at all. At 26, it would be great to see if he could use this season and this performance as a springboard to achieve some of his potential.