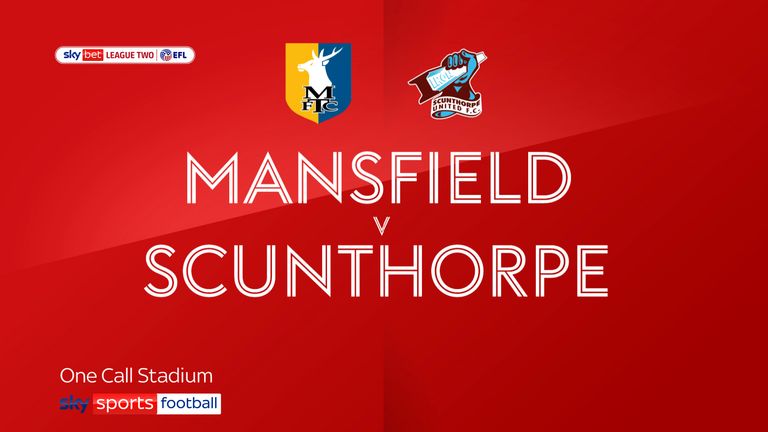 Highlights of the Sky Bet League Two game between Mansfield and Scunthorpe.

Mansfield secured their League Two safety in style with a dominant 3-0 home win over Scunthorpe.

For much of the game they led only 1-0 with United keeper Rory Watson in fine form.

But he was beaten twice in three minutes near the end to seal a more realistic score.

After enduring a strange hold-up to the action when a drone was spotted over the Bishop Street Stand on 12 minutes, the Stags were ahead on 19 minutes.

James Perch crossed low from the right and George Lapslie was there to force home from close range.

Watson denied him a second on 38 minutes as he turned another close-range finish over the bar.

Jamie Reid, Tyrese Sinclair and George Maris were all off target for Mansfield in a completely one-sided first half.

The overworked Watson was behind a powerful, low Lapslie shot on 53 minutes and two minutes later got in the way of Reid's poked finish from a Maris through ball before blocking a low Sinclair effort on 64 minutes.

But he was finally beaten again as Perch was offered space to drill in a superb low 20 yard finish with 10 minutes to go.

Perch looked set to add another three minutes later but sliced his finish from the right only to see the ball run invitingly for Sinclair to turn it home at the far post.