Report and highlights from the Sky Bet Championship clash between Middlesbrough and Barnsley at the Riverside Stadium as Andraz Sporar and Matt Crooks scored in each half to seal a comfortable Boro win. 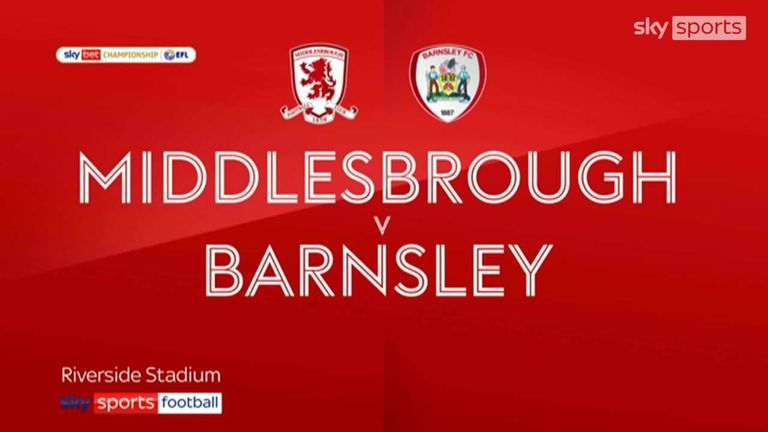 Highlights of the Sky Bet Championship clash between Middlesbrough and Barnsley

Middlesbrough claimed a second home victory inside five days with a 2-0 win over struggling Barnsley at the Riverside Stadium.

Despite an encouraging start from the Tykes it was Boro who took command and went in front courtesy of Andraz Sporar's 20th-minute header.

Matt Crooks' 87th-minute goal wrapped up the points to lift Middlesbrough - who saw Duncan Watmore miss an incredible chance from six yards just before the hour - up to 10th.

Barnsley, who remain in the relegation zone after a fifth defeat in a row, could not find a way back after Sporar's second goal since joining Middlesbrough. Now Markus Schopp's side are winless in 11 Sky Bet Championship matches.

The visitors started the brighter too and should have gone ahead.

Striker Cauley Woodrow missed the target from a decent angle in the fourth minute after a clever through ball from Claudio Gomes.

And seconds later Clarke Oduor had an even better chance after a Sol Bamba slip.

Kenya international Oduor opened his body up with just goalkeeper Joe Lumley to beat but his side-footed effort did not curl round enough and the ball shaved a post.

Those two wasted chances proved crucial as Middlesbrough took command of the first half after that.

Sporar, on loan from Sporting Lisbon, was first to threaten when he was denied by goalkeeper Brad Collins following a Marcus Tavernier pass.

And after Tavernier had been denied by Collins at his near post shortly afterwards, Middlesbrough went ahead with the next attack. 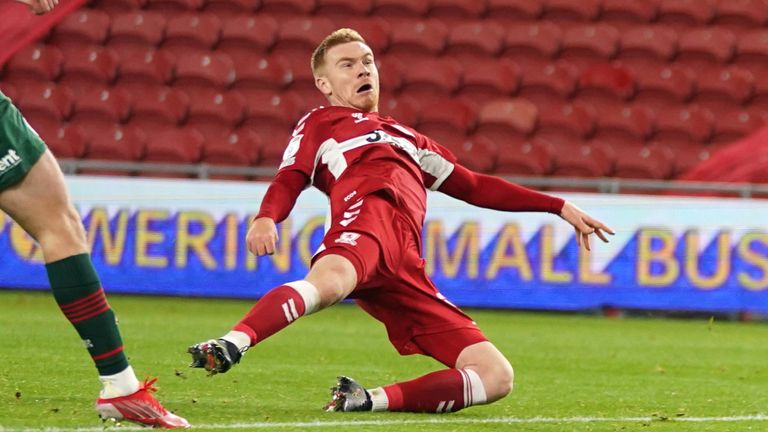 After a corner was half-cleared, Paddy McNair had a second chance to find his man and he did when Sporar was left unmarked to send a header into the bottom corner from eight yards.

The Slovenian then teed up Watmore five minutes before the interval but Barnsley bodies managed to get back and prevent a second.

Barnsley threatened again early in the second half and might have tested Lumley but Bamba made a fantastic saving challenge to prevent Aaron Leya Iseka from shooting in the area.

Almost immediately Martin Payero forced Collins into a save at the other end before Woodrow's low effort was spilled by Lumley, who was quick enough to deny Callum Brittain from the rebound.

Then Watmore's chance. After Payero had broken beyond his man down the right, he raced into the penalty area and squared for his team-mate only for Watmore to somehow side-foot over an empty net from six yards.

That miss left the door open for Barnsley to level, but Lumley was equal to an effort from Woodrow and the same player hammered an effort over from the edge of the area.

With three minutes remaining Crooks made sure. He headed down from McNair's header back across the box and the ball dropped into the bottom corner with Bamba trying to help it on.

Middlesbrough's Neil Warnock: "It helps how we are feeling but it doesn't take anything away from how I look back at a few games and ask how we don't have nine or 10 points more than we have. The players played like they enjoyed it tonight. You don't want it to fade away because we are better than that. The chances we missed tonight... we were not clinical enough in that area. But all credit to the lads.

"The dressing room has been really good. You have to work hard and we played some good stuff tonight, some great chances and crosses. I was a little apprehensive first five minutes but after that I thought we were on the front foot. They put me through the mill. Duncan did slip for his chance in fairness. But he has worked his socks off, I have nothing but praise. We won the game and that is the main thing, so Duncan's miss wasn't as bad as it could have been."

Barnsley's Markus Schopp: "We started well. Big chances at the beginning. A team in a situation like we are in now, we have to benefit from situations like that. When we conceded the goal we didn't have the organisation we wanted. We struggled after the goal. We came out in the second half better. We had a few chances where we didn't finish high up the pitch. A team like Boro, they have the quality to counter where they can hurt you. Two set pieces were the difference.

"We are in a situation, a tough situation. We will try a lot but we don't score and when you don't score you have to run after situations like today when we conceded the first goal. It is a really hard situation. I know how we solve certain problems. A couple of young players are making awesome development. It is tough for them to get so many minutes, but this is what I see, what I think. Barnsley will benefit from this."