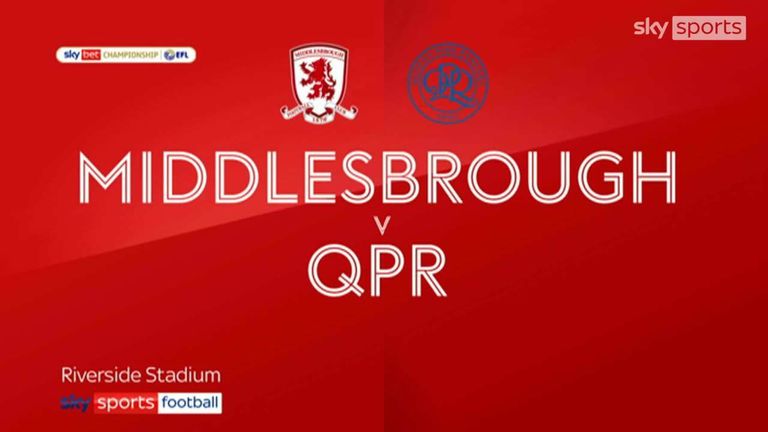 Highlights of the Sky Bet Championship match between Middlesbrough and QPR

QPR continued their unbeaten start to the Sky Bet Championship season with a 3-2 win at Middlesbrough - despite falling behind and being reduced to 10 men.

Moses Odubajo was shown a second yellow card in the 50th minute.

That formed part of a dramatic second half which started with Middlesbrough captain Jonny Howson turning Lee Wallace's cross into his own net to cancel out Uche Ikpeazu's seventh-minute penalty.

Six minutes after Odubajo was sent off, QPR took the lead when striker Lyndon Dykes hammered the ball low and through former team-mate Joe Lumley's legs.

It looked like Middlesbrough would still make the extra man count when Matt Crooks' cool finish levelled things up again after 72 minutes.

But less than four minutes later Chris Willock, who set up QPR's second, found the net himself with a calm finish into the bottom corner to give his side seven points from nine.

Boro had looked hungry to carry on from where they left off by beating Bristol City at the weekend and that lifted the home crowd from the first whistle.

When Howson's low drive from 22 yards bounced off a post, Isaiah Jones was on hand to turn the rebound beyond goalkeeper Seny Dieng but QPR's Jordy de Wijs was on the line to clear.

The resulting corner at the end of that attack was headed back across the six-yard area by Ikpeazu and Dykes was spotted pulling Dael Fry's shirt by referee Stephen Martin.

Ikpeazu, who had scored the opener five days earlier, hit the centre of the net with his penalty as Dieng dived to his right and Middlesbrough went ahead.

Willock's run and cross was ideal for Dykes to turn the ball goalwards but Lumley prevented an equaliser with his leg and then gathered.

Almost immediately after the restart, QPR were level when Wallace's cross from the left, after he was played down the line by Ilias Chair, was turned into his own net by the outstretched leg of Howson at the near post.

But shortly afterwards Odubajo, who had played a key role in that break, was issued with his second caution of the night for bringing down the lively Jones before he entered the box.

QPR responded well and with the hour approaching, Willock's little chip for Dykes was hammered goalwards first time from a tight angle and Lumley allowed the ball to go through his legs at his near post.

There was still more to come. When Jones' tenacity earned him the right to pass to Crooks with 18 minutes remaining, the former Rotherham man controlled before side-footing beyond Dieng.

But four minutes later QPR had the lead once more. This time Willock was picked out in space in the area, he side-stepped Fry before rolling the ball into Lumley's bottom-right corner.

Despite 10 minutes of added time, there was no way back for Middlesbrough.

Middlesbrough's Neil Warnock: "We will have plenty of excitement this year, can't fault that, it was a cracking game. I'm disappointed with goals, decisions, a mixture of everything really. We were soft tonight at the back, one or two could have put a foot in earlier. We were punished. Not naming any names. The goals conceded were poor. I will go in depth tomorrow on the training ground, but we have got to do better. They didn't have to do much to score the goals.

"I thought Uche was super, I do need to go carefully with him really because I don't want anything to happen to him. I thought Crooks off him was good too, and Jones. Then I see Charlie Austin headbutt Grant Hall and nobody else sees it. I thought he headbutted him. Looks like a straightforward headbutt, ref thought it was a clash of heads. Video is a little different to that."

QPR's Mark Warburton: "A QPR supporter wants to see progress in the team. We came 13th and 9th and we want to see progress. I would be foolish to say mid-table, we need to finish better than last year. We have to improve all the data points so therefore our aim has to be top six. We will be there or thereabouts if we deliver our performances. To get away wins at Hull and Boro, that's great.

"Pride is immense, to get pegged back at 2-2 with 10 men and then to win it as well as the board going up with 10 minutes on it. The players deserve enormous credit to a man. Chris showed his quality, he can take care of a football. He poses a real threat, he has an eye for goal and is a very talented player. He has everything in his locker."