Middlesbrough 0-3 Wycombe: Chairboys relegated with a bang at the Riverside

Report and highlights from the Sky Bet Championship clash between Middlesbrough and Wycombe at the Riverside Stadium as goals from Fred Onyedinma, Garath McCleary and Jason McCarthy ensured Wycombe went out with a bang. 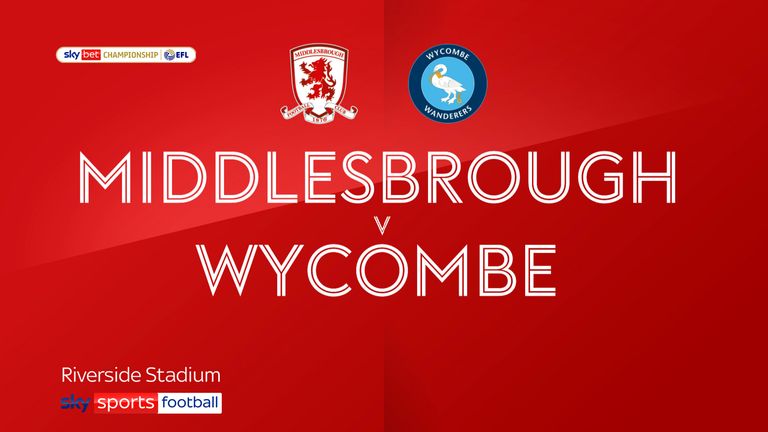 Highlights of the Sky Bet Championship match between Middlesbrough and Wycombe

Wycombe's relegation from the Sky Bet Championship was confirmed but they signed off in style by thrashing Middlesbrough 3-0 at the Riverside.

Gareth Ainsworth's side have dropped back into League One after winning promotion via the play-offs last season, despite claiming their joint-biggest win of the season on the final afternoon.

Goals from Fred Onyedinma, Garath McCleary and Jason McCarthy ensured Wycombe went out with a bang, even if their goal difference deficit at kick-off meant they never had a realistic chance of scrambling to safety.

Thanks to results elsewhere, Ainsworth's side climbed up to a 22nd-placed finish - above Sheffield Wednesday and Rotherham.

Middlesbrough's season effectively ended when their hopes of qualifying for the play-offs disappeared last month and, while Neil Warnock will be disappointed at his side's final-day collapse, he will be focusing his efforts this summer on building a squad capable of mounting a successful push for promotion next season.

How his opposite number, Ainsworth, must be wishing the current campaign could be extended by another two or three games.

His Wycombe side left themselves with far too much to do after winning just two of their opening 21 league matches, but have signed off with five victories from their final eight games.

They outplayed Middlesbrough from the off at the Riverside, scoring twice before the interval and arguably being deserving of an even bigger half-time lead.

The Chairboys opened the scoring in the 14th minute as Boro's backline was sliced open by Ryan Tafazolli's through ball. Onyedinma galloped clear and while his clipped shot struck Middlesbrough goalkeeper Jordan Archer, the ball deflected into the bottom left-hand corner.

Archer kept out Admiral Muskwe's driven effort after the Wycombe striker created space on the left of the box, and also produced a smart save to prevent McCleary finding the net after he dribbled across the face of the area.

McCleary's industrious running caused problems for the Middlesbrough defence all afternoon, and the Jamaican doubled his side's lead 11 minutes before the break.

His pass found Uche Ikpeazu in the box and, after the Wycombe forward drove past Grant Hall to pull the ball back from the byline, McCleary continued his run to bundle the ball home from close range.

Wycombe almost claimed a third goal before the interval when Onyedinma cut inside Hayden Coulson and drove in a shot that whistled narrowly over the crossbar and, while Middlesbrough might have had nothing to play for, Neil Warnock's frustration was evident as he barked out orders from the technical area.

The home side created nothing before the break and Wycombe remained the dominant force.

The visitors claimed a third goal shortly before the hour mark, with Tafazolli heading the ball back across goal from a corner and an unmarked McCarthy being left with the simple task of nodding home at the back post.

McCleary almost made it four when he waltzed past Coulson, but his shot was blocked by Jonny Howson.

Middlesbrough's Neil Warnock: "I'm not going to knock them today. We were poor but overall, to finish 10th after where we were when we came in, I think it's been a fabulous achievement. I think they've really done their best. You could see the limitations today, and you could see the players that were missing. We have to look forward now.

"I haven't got to think about today, really. To finish 10th, I'm delighted. Now we just need a bit of luck with the recruitment and with the players coming back from injury. If that all goes well, we'll have a very good chance of finishing higher than 10th next season. I don't think you can promise anything because I don't think anybody knows what your recruitment will be."

Wycombe's Gareth Ainsworth: "There are no mixed emotions - I'm just really proud of what we've done. The long-term planning for Wycombe was to get into the Championship but it wasn't supposed to happen this season. It might seem a strange thing to say because we've been relegated, but finishing third from bottom in the Championship is one of the proudest moments in my career.

"It's the highest the club has ever finished. We've spent a lot of time trying to get into League One, so to be playing in the Championship has been a dream really.