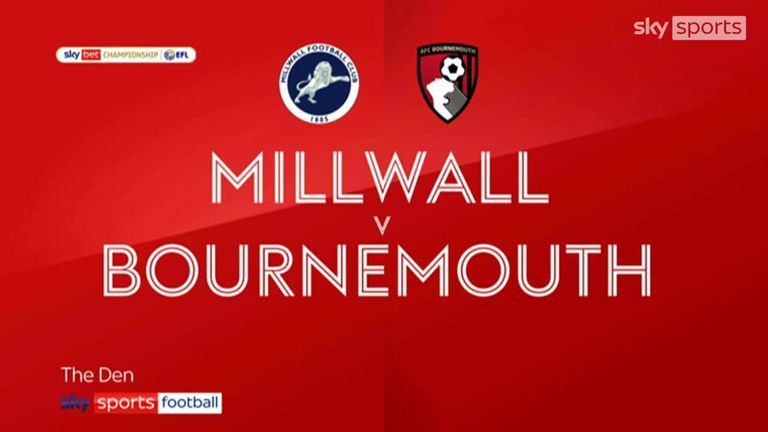 Bournemouth missed the chance to go back top of the Sky Bet Championship as they were held to a 1-1 draw at Millwall.

It looked like Dominic Solanke's 15th league goal late in the first half would be enough for the Cherries to return to winning ways and leapfrog Fulham back into first place.

But Benik Afobe's smart finish midway through the second half against his former club earned the hosts a third straight draw which left them four points off a play-off place.

Scott Parker's Bournemouth were looking for a response to their surprise 3-2 defeat to Derby but they struggled to create chances in a closely fought first half at The Den.

That changed in the 44th minute when Solanke finished from close range after his initial header from a Jack Stacey cross was blocked, although Millwall felt there was a foul in the build-up.

Bournemouth came flying out of the blocks in the second half, with chances coming thick and fast as they searched for a second.

Solanke went close to a second before Ryan Christie was denied by home goalkeeper Bartosz Bialkowski.

But Millwall survived and gradually earned a foothold in the game.

They were rewarded by an equaliser in the 67th minute through Afobe's fourth goal of the season.

The former Cherries striker latched on to a ball played over the top from substitute Tom Bradshaw and had too much pace for Gary Cahill, before slotting coolly past a helpless Mark Travers.

The Lions went searching for a winner, dominating the last 20 minutes with Bournemouth struggling to cope with the relentless pressure.

That winner very nearly came with five minutes of normal time remaining when Jefferson Lerma made a superb clearance from an Afobe ball in.

George Saville had the last chance for the Lions but he saw his effort drift a long way wide of goal from distance as the game ended all square.

Millwall's Gary Rowett: "A top side like Bournemouth, they're a really good side. I think they're one of the two outstanding sides in the division at the moment along with Fulham. But I think they will be delighted with a point going home tonight, and I think we're disappointed that we didn't get all three.

"So I think that really encapsulates the performance, I thought the performance was excellent, to play against a top side like that. We seemed a little bit shot-shy for some reason, we got around the box with some great play, and you just think pull the trigger, but we didn't seem to want to do that for some reason."

Bournemouth's Scott Parker: "I think we started the game well. I thought Millwall would come right out of the blocks and we'd have to weather it a little bit, which I thought we did. We did very well, it caused them some problems, we got our noses in front. Fair to say second half was not the way we would have liked it. I thought we were holding on for large parts of the second half. They went from back-to-front pretty direct, full credit to them, they caused us a lot of problems, the goal was poor on our behalf, one long ball from 40 yards.

"We didn't really challenge the first one, flick it on, covering position is not great, so there was a lot there that we need to improve on definitely. I think in the end it was a big point for us. I think there was only one team at the end that was going to win the game and that certainly wasn't us, so I think overall in the end it's a well-earned point."