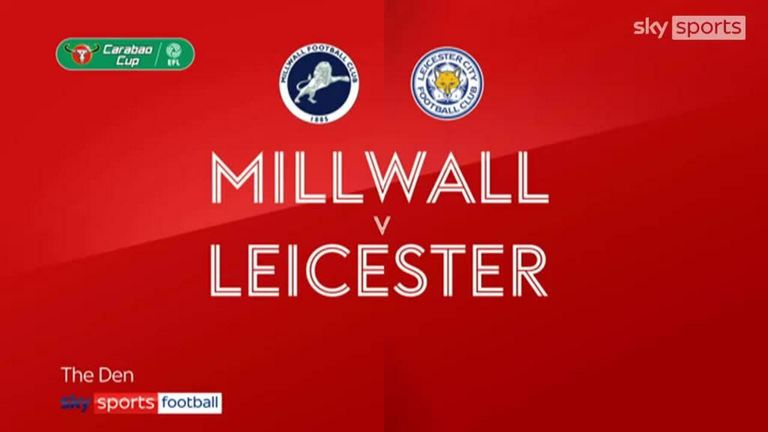 Highlights of the Carabao Cup third round match between Millwall and Leicester.

Ademola Lookman scored his first goal for Leicester and Kelechi Iheanacho blasted home a second as the Foxes progressed to the fourth round of the Carabao Cup with a 2-0 win over Millwall at The Den on Wednesday evening.

The Premier League side had been restricted to just one off-target effort during the first half of the tie but south Londoner Lookman, who is on loan from RB Leipzig, reacted quickest to Iheanacho's parried shot on 50 minutes to break the deadlock.

Foxes frontman Iheanacho eventually grabbed a goal for himself two minutes from time, emphatically lashing high into the goal from the edge of the box to wrap up the contest.

Millwall, who threatened from long throws throughout the clash, had gone close to an equaliser through Shaun Hutchinson and Matt Smith but were unable to make their aerial threat count against a Leicester side which grew in confidence and controlled the match through the latter stages.

The win means Leicester boss Brendan Rodgers has progressed from the last 24 cup ties he's managed against lower-league opposition and the FA Cup and Community Shield holders are now just three wins away from another trip to Wembley.

The last time these two sides met was in 2017, when Millwall, then in League One and reduced to 10 men during the match, pulled off an almighty FA Cup shock against the defending Premier League champions, thanks to a last-gasp winner which sent them into the quarter-finals.

The Lions' hopes of repeating that upset were dealt a blow before kick-off, with key man Jed Wallace out with illness but Gary Rowett's side started positively, limiting their opponents before Ryan Leonard fired wide after a long throw and Connor Mahoney forced Danny Ward into a save in quick succession.

Chances were at a premium for both sides from then on until the final moments of the half, with Youri Tielemans sending Leicester's first shot of the game over the bar from a free-kick on 43 minutes, before Ben Thompson glanced a header onto the roof of the Foxes' net on the stroke of half-time.

While the first half may have been short on action, the opening goal came just five minutes after the restart. Millwall wastefully gave up possession from a throw-in near the halfway line, allowing Iheanacho to burst through and fire at goalkeeper George Long, whose parry was gleefully thumped home by former Charlton forward Lookman on his return to south London.

Hutchinson headed another flicked-on long throw just wide as Millwall searched for an instant response before sub Smith was unable to get enough of a connection on a Connor Mahoney free-kick to steer it the right side of the far post.

Millwall paid for those misses in the closing stages when Iheanacho, who should have scored at the end of a rapid Leicester counter-attack moments earlier, got on the scoresheet with a stunning strike to send Leicester supporters home dreaming of another trip to the national stadium.

Millwall manager, Gary Rowett: "When you go toe-to-toe with a very good Premier League side you can't make mistakes. We took the wrong option with the throw-in but we had an opportunity to deal with it, make a mistake, give the ball away, and allow them into a good scoring position without having to work for it. Both teams had opportunities. I felt their second goal was an unfair reflection of the first 70 minutes of the game. In the circumstances we handled the game pretty well."

Leicester assistant manager, Chris Davies: "Really positive. Really good win. I thought we had good control of the game throughout. We had to defend well at times. It was an excellent goal from Iheanacho but his general play was really good. It was a good all-round performance. He's had to be patient at times this season but he knows he's a really important player for us. Ademola Lookman affected the game against Brighton and it was another good performance from him."

Millwall go to Nottingham Forest in the Championship for a 3pm kick-off on Saturday, while Leicester host Burnley in the Premier League at the same time.