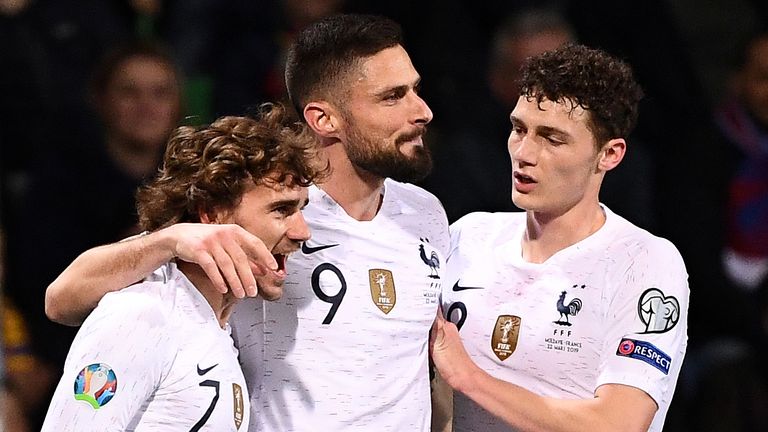 France started their European Qualifiers campaign in convincing fashion with a comfortable 4-1 victory over minnows Moldova in Chisinau.

Three goals in 13 first-half minutes from Antoine Griezmann, Raphael Varane and Olivier Giroud set the World Cup winners on their way in their opening Group H fixture against a team ranked 170 by FIFA, 169 places below their opponents.

Kylian Mbappe added a fourth late on for the Euro 2016 runners-up before Vladimir Ambros netted a consolation soon after in what was the first meeting between the sides.

The match was totally one-sided, with Moldova failing to register a single shot on target at the Zimbru Stadium until Ambros' strike, with the only surprise that it took France 23 minutes to make the breakthrough.

When it came it was a goal of sublime quality as Griezmann's short pass to Paul Pogba was, in turn, floated over the Moldovan defence for the Atletico Madrid striker to run on to and thunder home a left-foot volley from seven yards for his 27th goal in 68 international appearances.

Three minutes later it was 2-0, with Griezmann the supplier from a corner that Real Madrid defender Varane met at the near post with a flick header for his fourth goal for his country. After Blaize Matuidi - starting due to Kingsley Coman sustaining a hamstring injury minutes before kick-off - drove a first-time shot over the crossbar and Alexei Koselev saved low to a Mbappe effort, France made it 3-0 in the 36th minute.

It was again all too easy as Pogba and Matuidi combined inside the area, with the latter dinking in a cross on to which Chelsea striker Giroud turned and touched home with his left foot to claim his 35th international goal.

It should have been 4-0 in the 66th minute only for Koselev to superbly palm away a first-time 22-yard curler from Pogba in the 66th minute. On the follow-up, Benjamin Pavard's attempt at a curler with the outside of his right foot flew over the angle of bar and post.

Koselev again managed to keep the score down in the minutes that followed, initially turning aside a shot from Mbappe following a jinking run, and then leaving Pogba stunned by brilliantly tipping wide at full stretch a header from the Manchester United midfielder after he had met a Griezmann free-kick.

Follow all of Saturday's Euro 2020 Qualifiers live on Sky Sports Football from 2pm and via our live match blogs on SkySports.com