Lacazette's 36th-minute strike, a 25-yard curling effort which caught Alex Meret on the wrong side of his goal, put Arsenal effectively four goals up on their hosts, who did not trouble Petr Cech enough to even hint at mounting an unlikely comeback in Thursday's quarter-final second-leg tie.

On a night when Napoli had let fans into their San Paolo stadium nearly three hours before kick-off, instead of inspiring their team, the partisan atmosphere seemed to intimidate the Italians, who managed only one shot on target before half-time when Jose Callejon was denied by Cech's legs following a rapid counter.

However, Arsenal were denied a perfect opening 45 minutes after losing Aaron Ramsey to injury with what appeared to be a hamstring problem.

After half-time, Meret kept Napoli's faint hopes alive by denying Pierre-Emerick Aubameyang a seemingly open goal with a stunning save, while Arkadiusz Milik wasted a fine chance, sliding too early to meet Mario Rui's cross and firing wide when the ball rebounded off his midriff on one of the few occasions Napoli breached an impressive Arsenal backline.

Arsenal progress to face Valencia, one of manager Unai Emery's former sides, in the semi-finals, with the prospect of a first European final in 13 years well within sight.

Man of the match: Alexandre Lacazette

Juventus were the only team to have beaten Napoli in Naples this season coming into Thursday's game, and with Carlo Ancelotti's bold claim that his side would be "brilliant" in the second leg, there was a feeling that overturning a 2-0 first-leg deficit was an achievable aim - especially with a capacity crowd raising the atmosphere at the San Paolo.

But Arsenal settled the better from the off, believing attack to be the best form of defence and committing men forward at will to leave Carlo Ancelotti's side struggling to get out of their own half at times.

One rare breakaway came from an Arsenal corner, when the unlikely figure of Kalidou Koulibaly fed Callejon on the right, but his poor effort was straight at Cech who kicked the ball clear.

Any realistic Napoli hope of progressing to the semis was effectively killed off by Lacazette's fine free-kick, after the Frenchman picked himself up from a Vlad Chiriches foul and fired into the right corner, wrong-footing Meret entirely.

Mesut Ozil was Arsenal's only change from the first leg, with Aaron Ramsey moving into the hole and Granit Xhaka coming into midfield.

Napoli made three changes, the most notable seeing Dries Mertens dropped to the bench - only for him to be introduced at half-time.

Milik summed up the hosts' night when his diving header from Piotr Zielinski's dinked ball over the top headed straight for the corner flag, and after half-time he was guilty of missing another fine chance when played in by substitute Rui.

By this point, Lorenzo Insigne - playing his 300th game for his hometown club, and who had beaten Cech before half-time only to be denied by the offside flag, while barely testing him with an attempted chip later on - had found himself surplus to requirements and replaced, only to barely acknowledge Ancelotti as he made his way to the bench before standing, alone, away from the other subs.

It did little to add to a hugely disappointing night for Napoli, who created nothing of note in the final 15 minutes of the game and ended their European campaign with a whimper. 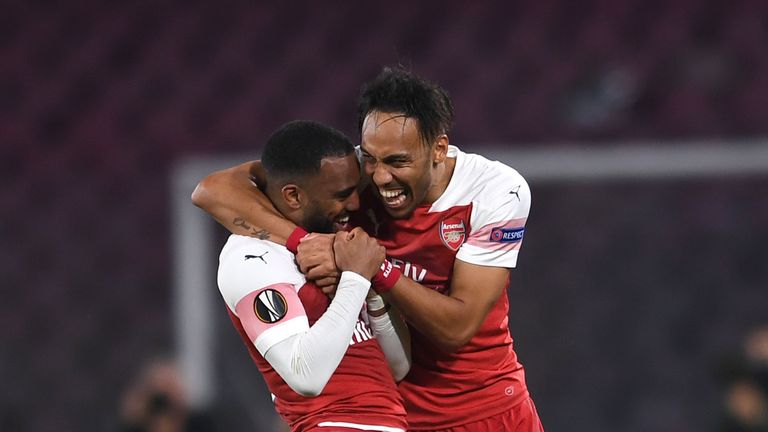 Speaking on The Debate, Ray Parlour and Steve Sidwell discuss Unai Emery's debut season in charge of Arsenal and the impressive job the Spaniard has done so far

Arsenal host Crystal Palace on Sunday (kick-off 4pm), looking to cement their place inside the Premier League top four. They will travel to Valencia on May 2, before welcoming Emery's former side to the Emirates a week later.