Report as Germany fall to fifth defeat in nine matches 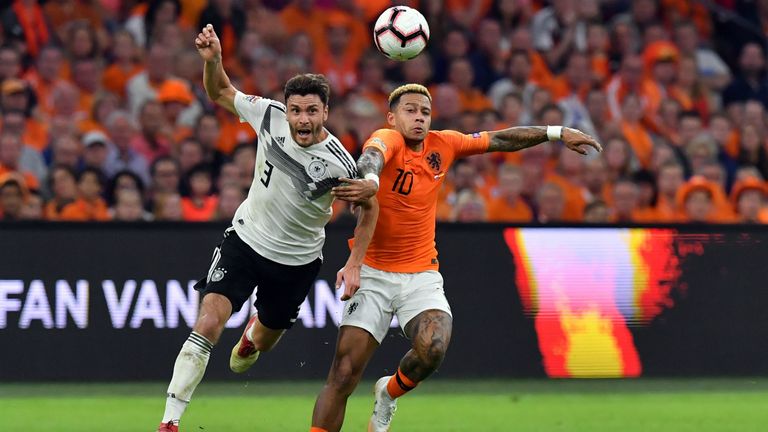 Virgil van Dijk, Memphis Depay and Georginio Wijnaldum handed Netherlands a 3-0 UEFA Nations League victory at home to a Germany side that missed 21 opportunities on goal.

Liverpool defender Van Dijk headed the hosts in front (30) at the Amsterdam ArenA on Saturday night, and after Leroy Sane was guilty of missing Germany's best chance after the break, Depay (87) and Wijnaldum (90+3) wrapped up the victory late on.

It was the fourth time in six games Germany failed to find the net, while they have now won just three of their last 12 matches going into Tuesday's Nations League match against world champions France - live on Sky Sports.

Netherlands, meanwhile, pick up their first victory of the competition, but still trail France by one point in Group A1.

After a slow start, Timo Werner poked an effort wide 15 minutes in before Thomas Muller forced Jasper Cillessen to make a smart stop at his near post.

Netherlands led on the half-hour mark when Manuel Neuer misjudged a corner. The cross evaded the Germany goalkeeper before Ryan Babel's header deflected onto the bar, with Van Dijk on hand to nod in the rebound.

Man of the match: Memphis Depay

Muller could only find the side netting as Germany searched for an equaliser, though it was Netherlands who ended the half on top with Depay sending two attempts wide.

After half-time, Mats Hummels saw his header blocked on the line by Babel, while Julian Draxler fired a wild attempt over the bar moments after coming off the bench.

Schalke forward Mark Uth made his debut for Germany, while Manchester City’s Leroy Same was among the substitutes.

Fellow substitute Sane then spurned Germany's best opportunity to level, with the Manchester City winger driving his effort beyond the far post from just outside the six-yard area.

Netherlands then twice punished Germany on the counter, with Depay turning in Quincy Promes' cross before Liverpool midfielder Wijnaldum rifled an effort past the helpless Neuer in injury time.

Man of the match - Memphis Depay

The Memphis Depay so seldom seen at Old Trafford, but a performance Manchester United fans knew he was capable of before leaving for Lyon.

The forward orchestrated almost every Dutch attack, and his pace was at times too much for the German defence. He got the goal his performance deserved, but having hit the bar and forced Neuer into a couple of saves, the 24-year-old could easily have claimed a hat-trick.

The Nations League action continues for Germany as they travel to World Cup winners France on Tuesday - live on Sky Sports Mix - while Netherlands make the short trip to Belgium for a friendly on the same evening, live on the Sky Sports Football red button.