Report and free highlights as Newcastle and Southampton go into the international break winless in the Premier League; Callum Wilson's header was cancelled out by Mohamed Elyounoussi equaliser; Allan Saint-Maximin scored in the 90th minute; James Ward-Prowse converted last-gasp penalty FREE TO WATCH: Highlights from Newcastle's draw over Southampton

James Ward-Prowse scored a dramatic late equaliser for Southampton from the penalty spot after a VAR review in a pulsating 2-2 draw against Newcastle at St James' Park.

After 21 attempts on goal, Southampton took a late point off Newcastle with their 22nd from the set-piece awarded in the final seconds of the game which Ralph Hasenhuttl said afterwards "showed we are fighting".

A few boos rung around the stadium at half-time as Newcastle looked slightly lacklustre going forward, but the mood quickly turned into relief when Callum Wilson steered his header home in the 55th minute.

Southampton looked like they may have been made to regret a huge chance missed by Moussa Djenepo midway through the first half as he missed an open goal from only two yards out.

But Mohamed Elyounoussi found an equaliser with his first Premier League goal for Southampton, bundling in on the rebound from a Freddie Woodman save in the 74th minute.

Allan Saint-Maximin thought he had scored the winner in the 90th minute when he finished from close range, but after Adam Armstrong was tripped in the box by Jamaal Lascelles, Ward-Prowse denied the hosts their first Premier League win of the season.

Southampton started on the front foot and started the better side. Djenepo should have had the visitors ahead in the 23rd minute, but he somehow managed to miss an open goal from two-yards out after the ball was squared across to the Mali international by Che Adams.

Hasenhuttl's side continued to push forward down the wings and came close to scoring again in the 38th minute through a Ward-Prowse free-kick from the left flank, but his bouncing, deflected strike was punted away by Freddie Woodman.

Newcastle's attacking gameplan appearing to be get the ball to Saint-Maximin and Joe Willock at every opportunity with their best chances of the first half arrived in the final five minutes. A counter-attack, led by Saint-Maximin, resulted in Wilson blasting over the bar moments before the former Bournemouth striker saw his near-post header excellently parried away by Alex McCarthy.

Newcastle looked rejuvenated in the second half and Wilson found the opener, turning in a cushioned header from Jacob Murphy to score his second Premier League goal of the season.

Southampton fought back through Elyounoussi. His stabbed effort on goal from close range was parried away by Woodman before he was fortunate to bundle the ball into the net for his first Saints goal in the Premier League.

St James' Park almost erupted when Saint-Maximin scored what looked to be a late winner in the 90th minute. Saint-Maximin started an attack which saw substitute Ryan Fraser have his shot blocked on the line, but it came out to the Frenchman to thrash the ball into the net.

Then came even later drama. Armstrong was about to shoot but Lascelles made a last-ditch tackle which referee Paul Tierney decided to give as a penalty after a tense VAR review. Ward-Prowse converted his spot-kick low into the bottom corner. 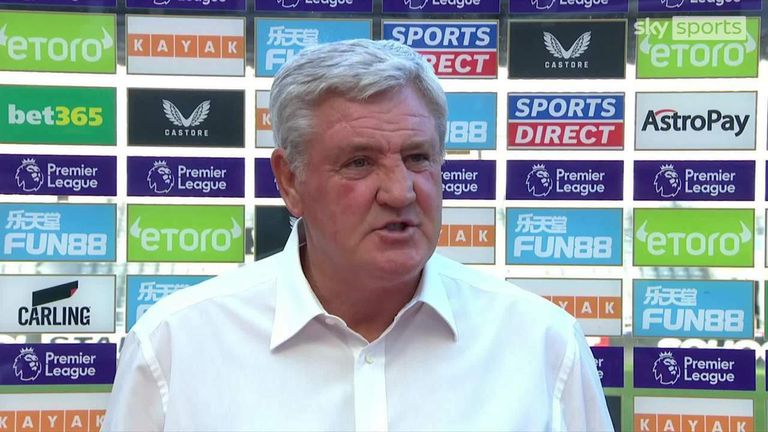 Newcastle boss Steve Bruce admitted his side did give away a late penalty against Southampton but says the process of how it was given needs to be looked at.

Newcastle manager Steve Bruce: "The fans are entitled to their opinion [about the first-half performance]. I find the whole thing disappointing as anyone would but the first half wasn't good enough. I accept that. The second half we played with more intensity, intent and passed the ball better. It was a disappointing afternoon all round.

"For me it is a penalty. My concern is why the referee goes to the screen. I don't know why referees go however I will say it was a penalty." 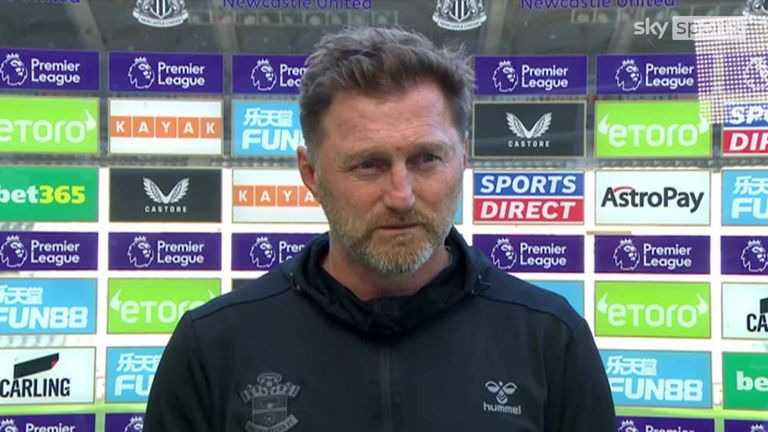 Ralph Hasenhuttl admits the dramatic finish in Southampton’s 2-2 draw at Newcastle was not good for his nerves, but the Saints boss says his side missed some unbelievable chances in the first half.

Southampton manager Ralph Hasenhuttl: "In the past we've played good games there and never taken something. It was always running against us. In this game we deserved at least a point. We have not been able to win today but when you have to take a late point you must take it.

"When you come back in the 93rd minute then you must be happy. We showed we are fighting until the end because coming back from such a hit in overtime it's fantastic for the guys and deserved.

"It was a clear penalty. Mike Dean was the VAR and he couldn't say no that it wasn't a penalty."

When asked about Djenepo's missed chance in the first half, Hasenhuttl said: "It was an absolutely unbelievable chance we have to score normally, yes."

Newcastle travel to Manchester United where Steve Bruce's men could be up against Cristiano Ronaldo on his second debut on September 11; Kick-off at 3pm.

Southampton will host West Ham at St Mary's on the same day; Kick-off at 3pm.