Burnley will be in a better position to invest in new signings this summer than when they were last promoted to the Premier League in 2014, according to chairman Mike Garlick.

Sean Dyche's side confirmed their automatic promotion with a 1-0 victory over QPR on Monday, and the club's board and scouting department are already working with the manager on plans to improve the playing squad ahead of next season.

"We want to improve the team," Garlick told Sky Sports News HQ. "The emphasis is on quality not quantity, but bearing in mind that balance we have always got to find - between improving, and making sure if the worst-case scenario happens and we don't make it, we've got a sustainable plan for the next four to five years.

"It's fair to say last time in the division we had to pay back a lot of external debt, and debt to directors. We also had to redevelop our training ground - that was a top priority - and we also bought our ground back, which we didn't own at the time. That cost about £20-25m, and this time we don't have to do that - we are debt-free.

"It's fair to say we'll have an extra pound or two, so we can give it an extra push, whilst maintaining that balance between trying and stay in it whilst knowing if we don't, we'll have a future for the club."

On the financial significance of earning promotion, Garlick confirmed Burnley would receive an unprecedented cash injection from the Premier League.

"It's well documented that the club finishing bottom gets just shy of £100m, so in black and white terms, that is what it's worth to us," he explained. 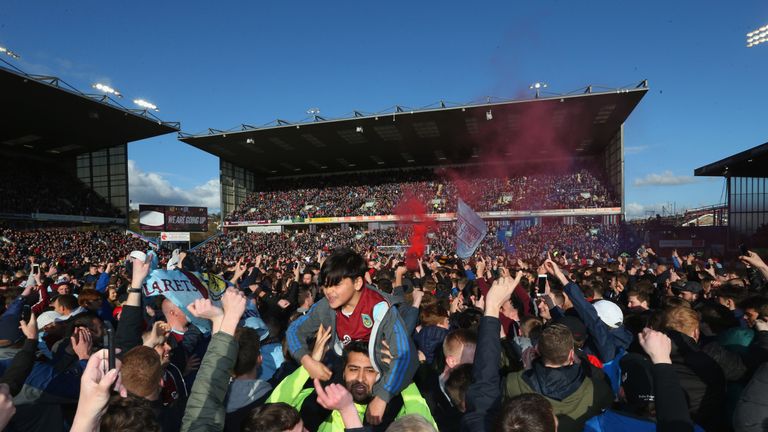 The football club is the cathedral for the town, the fans come there to worship and their prayers have been answered.

"There are other spin offs, sponsorships, extra people visiting the town - it's had its tough times so this can only help. The last time we were in the Premier League, we had to find a balance between trying to stay in it, and investing for the future and making sure in five years time we still had a club, and making sure we could still pay the wages.

"There are lots of examples of Premier League clubs who have been in it, got relegated, and that are now struggling. We know who they are and don't want to be one of those clubs."

Garlick paid tribute to manager Dyche, who was able to help the club deal with the disappointment of relegation, and secure an immediate return, seemingly stronger than when they were promoted two years ago.

"We owe him everything," Garlick admitted. "From the day we hired him almost four years ago, he's been a revelation. The main element he brings is the element of camaraderie, teamwork and hard work. All of those things come together, and if you haven't got that, you aren't going to win anything. It's great for the fans and the town. The football club is the cathedral for the town, the fans come there to worship and their prayers have been answered."

Garlick was quick to send his congratulations to the newly crowned champions, but warned his club's supporters not to expect a title push at Turf Moor next season.

"It must be fantastic, and well done to them, but if you're suggesting next year we might go and win it, I think that might be difficult! I think if you look back at the last 20 years, it's almost been predictable what the top four is going to be, and that has certainly changed this season," he said.

"I don't think you'll get a Leicester winning Premier League every season, but the top four or five clubs might be different over the next five to 10 years. It's well documented that the money is going up in the Premier League, and the differential between the top and the bottom clubs has narrowed."

Watch Burnley attempt to wrap up the Sky Bet Championship title when they travel to Charlton on Saturday, live on Sky Sports 2 HD from 12pm.