Toni Kroos believes Leroy Sane can be a match-winner for Germany and Manchester City, providing he listens to advice and works on improving his body language.

Despite playing a key role in City's Premier League-winning squad last season, Sane was not part of his country's World Cup squad this summer.

But after Germany's travails in Russia, coach Joachim Low named the 22-year-old in his squad for Thursday's UEFA Nations League opener against France in Munich - live on Sky Sports - and the friendly international against Peru on Sunday.

Man City winger back for games against France and Peru after being omitted for World Cup...

Sane's recall to the international fold coincides with his omission from the Manchester City squad, where he is yet to start for Pep Guardiola's side and was not even named among the substitutes for the 2-1 Premier League win over Newcastle on Saturday.

"Sometimes you have the feeling with Leroy's body language that it is all the same, whether we win or lose. He has to improve his body language," said Real Madrid midfielder Kroos, who is also in Low's squad. Sane was left out of the Manchester City squad for the game against Newcastle, but manager Pep Guardiola insists there are no problems with the player

"He's a player who has everything you need to be a world-class player but sometimes you have to tell him he has to perform better.

"What is crystal clear is his quality, his pace, his left foot. He was fantastic for City last year but Pep has the same problem at the moment - he's trying to get the best out of him. 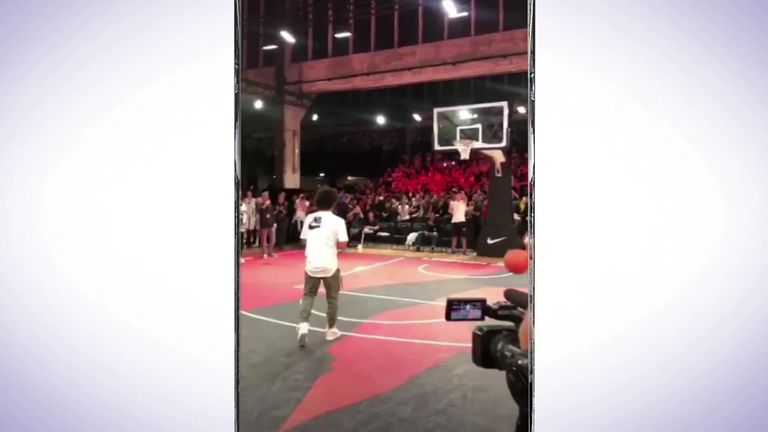 Sane took to social media to capture his Germany team-mates Jerome Boateng, Antonio Rudiger and Serge Gnabry as they tried their hand at basketball, watched by LeBron James

"If he performs, he's a real weapon. He has the quality, especially for us, but maybe the head coach looked at his performances for the national team and wasn't happy."