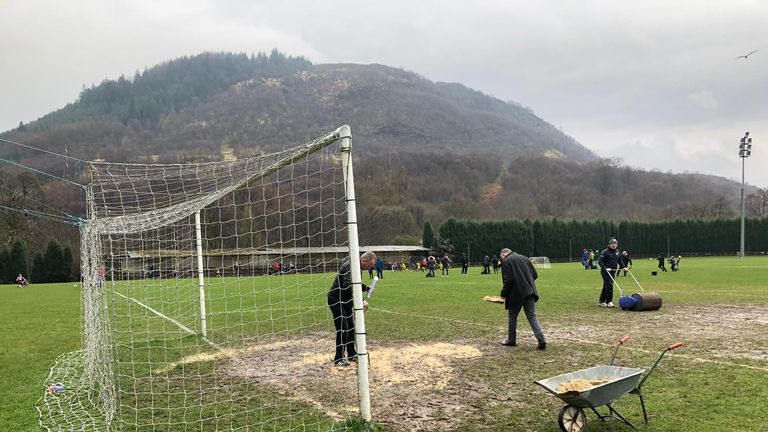 A referee held up in traffic and deer poo. Fort William had their work cut out to play Nairn County and Soccer Saturday were impressed

Fort William's Highland League clash with Nairn County was delayed because the pitch was covered in deer poo.

Kick-off had already been put back because the referee was stuck in traffic when his assistants arrived and deemed the surface unplayable.

Coconut on pitch in Edinburgh derby

A herd of deer are said to have descended on the pitch overnight, with most of them leaving their mark before they left, forcing members of Fort William staff to try to clear up the mess.

The officials also expressed concern over water-logging and rutting on the pitch, with staff battling hard to roll the surface out and sand the affected areas.

A pitch inspection took place when the referee finally arrived and the fixture at Claggan Park got going at 3.40pm. It finished Fort William 2-6 Nairn County - the home side's 29th defeat in 31 games this season.

Fort William player Scott Hunter told Sky Sports: "I just hoped the game would go ahead. We can't catch a break at the moment.

"It's been a tough season but we want to keep the club going for the community. We've got a great youth set-up here. If we folded there would be no football in Fort William for the kids."

Fort William have not won a match for almost two years - since beating Strathspey Thistle in April 2017 season - and they began the season on negative points, having been penalised for fielding ineligible players last term.

They began the campaign with just four players on the books, and a new board came in to try and keep the club going for the sake of the local community.

Fort William currently sit bottom of the table on minus-seven points with a negative goal-difference of 204. The club offered the players the chance to drop down a league, having finished bottom last term, but they refused.