The 27-year-old defender has played in all of Liverpool's 36 league games this season, helping the Reds to a league-best 20 clean sheets. 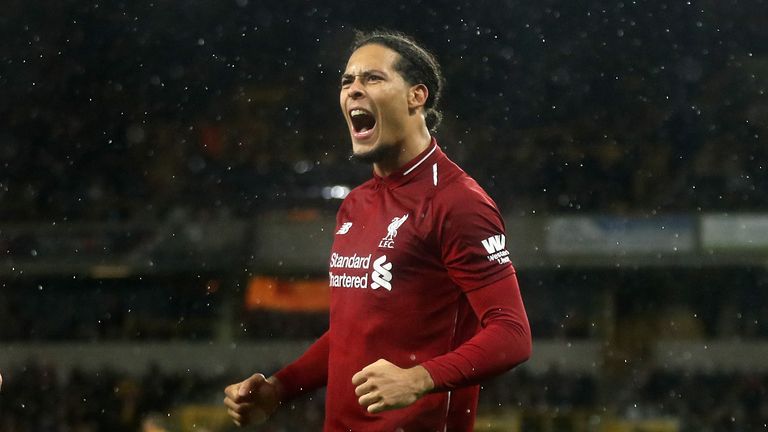 I think it's the highest honour you can get as a player to get voted player of the year by the players you play against every week.

The Dutchman signed for Liverpool from Southampton in January 2018 for £75m, a transfer fee his performances have vindicated, with Liverpool losing just one Premier League game so far this season, against Manchester City in January.

'It's special that the players voted for me'

"It's pretty difficult to put into words," Van Dijk said.

"I think it's the highest honour you can get as a player to get voted player of the year by the players you play against every week. It's special. I'm very proud and honoured to receive it."

Van Dijk, who becomes the sixth defender to win the award, added: "If you see the shortlist and quality there is, it's very special that the players in the league voted for me.

Sterling was considered Van Dijk's main competition for the prize, with the England forward scoring 17 goals and making 10 assists in his 32 league appearances for Pep Guardiola's side.

The 24-year-old was up for the same award last season, but pipped to it by team-mate Leroy Sane.

Sterling's performances on the pitch have been impressive, but his vocal stance on racism in football has also won praise.

Sterling has called out racial abuse directed at him and other players, backing harsher punishments for those found guilty of discriminatory behaviour, and has put his name to a manifesto demanding a change in how football's authorities deal with racism in the game.

Sterling wrote on Twitter: "Very proud with the PFA Young Player of the year, and truly thankful Incredible support for the whole season, let's go for more!!!"

City team-mates Sterling and Silva were on the shortlist for both awards, with Liverpool's Trent Alexander-Arnold, Manchester United forward Marcus Rashford, West Ham midfielder Declan Rice and Bournemouth's David Brooks also nominated for the young player of the year award.

Arsenal Women forward Vivianne Miedema won the women's award after scoring 22 times to lead the Gunners to their first league title since 2012.

They were crowned champions on Sunday after a 4-0 win away to Brighton.

The Netherlands international had also been nominated for the Young Player of the Year award, but that went to Manchester City forward Georgia Stanway.

The 31-year-old defender was named in the PFA's Women's Super League Team of the Year and is set to skipper the Lionesses at this summer's World Cup in France.