Phillip Cocu at Derby County: A winner with a focus on youth - but can he adapt?

Phillip Cocu is the new Derby manager but what will he bring to the club? Adam Bate speaks to a former PSV striker and one of the Dutchman’s former colleagues at the Eredivisie club to find out more about the pros and cons of the appointment…

While Chelsea supporters are celebrating the return of Frank Lampard, Derby fans are equally excited about the appointment of his successor. Dutchman Phillip Cocu is the first foreign manager in the club's history and his arrival has sparked renewed hope that, after a series of near misses, Derby could take that final step back to the Premier League.

Lampard did well at Pride Park but there is still a buzz in the city that the club has now received compensation for both him and his predecessor Gary Rowett - and still managed to upgrade. Like Lampard, Cocu is a former world-class midfielder. Unlike Lampard, he comes with proven coaching pedigree having won the Eredivisie three times with PSV.

That accomplishment might have been devalued around these parts given that former Derby boss Steve McClaren also won the trophy with FC Twente, but it should not be underestimated given the circumstances. PSV had not won the title for five years when Cocu got the job. He was central to the overhaul that brought success back to Eindhoven. 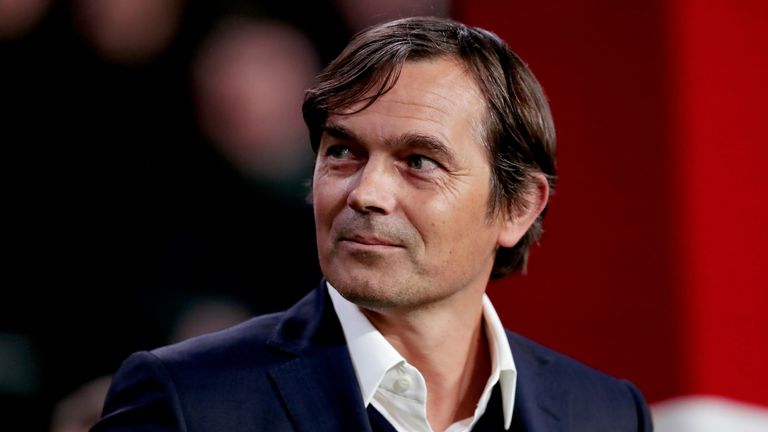 Pascal Jansen took over from Cocu as PSV U19 coach when he got the top job at the club, later serving as U23 coach and finally academy manager during their five years together. It was a transformation that reaped rewards under sporting director Marcel Brands with Cocu embracing a more joined-up approach that put greater emphasis on youth.

"We began the project in 2013," Jansen tells Sky Sports. "Prior to that, PSV had players coming through the academy but the focus within the club was not really on developing players. Back then, there was not the focus on making sure that at least 50 per cent of the players came through the academy to the first team. Things changed in 2013.

Jansen is now the assistant at AZ Alkmaar, while Brands has moved on to Everton, but Cocu is joined at Derby by Chris van der Weerden, his long-time assistant, and Twan Scheepers, another coach with a background in youth development. The new Derby manager has already stressed that there will be an emphasis on the academy and that make sense.

Derby owner Mel Morris has invested heavily in youth and there are some positive signs with the U18 side becoming national champions in May with a 5-2 hammering of Arsenal after narrowly losing out to Manchester City in the FA Youth Cup. Jansen is optimistic that Cocu and his former colleagues are well placed to make the most of the talent in the setup.

He is very interested in the academy and helping young players to develop. He has a very clear view of what he wants

"That's one of his qualities, of course," says Jansen. "In the five years when he was the coach at PSV we worked closely together in terms of preparing the talented players from the academy to join the first team. He is very interested in the academy and helping young players to develop. He has a very clear view of what he wants from the young players.

"He knows the importance of it because when he finished playing he went into the PSV academy and coached the U19 team together with Chris. Those two played together for PSV and have known each other forever. I also know Twan very well because he was my former assistant with the U23s. These are good guys with good knowledge and good qualities.

"Obviously, when it comes to Phillip you are talking about someone who has played over 100 games for the national team. He has played World Cups and played for Barcelona for six years, captaining a very special team. He was also the captain of PSV winning a lot of titles and has then gone on to win a lot of titles with them as a coach too.

"So this is someone with the winning ingredients in terms of how to live and how to work. He is very calm and very analytical. He has the winning formula in his DNA and for all of these reasons he is someone who I think will do very well in England."

This question of DNA is an intriguing one because the recent image of the Dutch coach abroad, particularly in England, is not altogether positive. Like Cocu, Frank de Boer arrived as a former Barcelona player, but his brand of football received short shrift at Crystal Palace amid a perception of a lack of pragmatism - a particularly useful trait in the Championship.

However, while there are some parallels with De Boer given that the pair won seven out of eight Eredivisie titles between them from 2010/11 to 2017/18, Cocu cannot be accused of being a total football zealot. Indeed, if there was a criticism of him during his time at PSV it was over his style of play. Former PSV forward Rob McDonald thinks it could be an issue.

"They have a good youth setup at Derby and Phillip will certainly give some attention to that," McDonald tells Sky Sports. "He was a great footballer, a real winner, and he has played for some big clubs. I genuinely hope it works because he is a really nice bloke but the thing with Phillip is that the style of football that he had at PSV was actually quite defensive.

"You would imagine that a club like PSV would be playing in the final third for most of the time, but he would sit in a lot of the time instead and try to hit teams on the counter-attack. It was not the free-flowing style of Ajax or even the football Feyenoord are playing now.

"It is a choice that coaches make but the reason why I am saying it might be a problem is that in England, especially at a club like Derby, you have no choice. You have to attack.

"The DNA of Derby, if I am not mistaken, is that they will want to play attractive, attacking football. So I am really curious how he will do in terms of the style because he is more defensive than English clubs would expect. He has got to realise that with the group of players he has at Derby they must be among the favourites so he has got to attack.

"His mindset will need to change."

Could that happen? "It could," says McDonald. "He played at Barcelona, after all, and they only attacked. He might have had his reasons for doing that at PSV but I look at the squad he had there and I would say he could have attacked more than he did with those players."

Cocu is already making the right noises, saying that he 'likes having the ball', but supporters can expect him to continue to be practical in his outlook. He has spoken of finding the right balance between the qualities of the Derby players and the style that he wants. It is not only about possession, he insists. His team will be more direct when they need to be.

The hope is that this pragmatism will be a strength.

But perhaps the biggest factor in whether or not Cocu is able to bring success back to Derby will be time. He was denied that during a frustrating spell at Fenerbahce last year, but if he is given the opportunity to build something at Derby, as he was at PSV, then there is every reason to believe it can work. There is certainly an appetite for continuity among supporters.

None of the previous half a dozen Derby managers have stayed beyond their first full season in charge. Appointing a proven winner who wants to work closely with the club's academy offers the hope of something more. "He has signed a four-year deal which means they are looking for consistency," says Jansen. "I think he is going to do very well."

Will Phillip Cocu be a success at Derby? If you're reading on skysports.com comment below to get involved in the debate, but please adhere to our House Rules. If you wish to report any comment, simply click on the down arrow next to the offending comment and click 'Report'.