Brendan Rodgers has brought the buzz back to Leicester City and ambitions are high. Ahead of his return to Chelsea, he reflects on his coaching journey, how the game has changed, the challenge of staying modern, and what he can really achieve with the Foxes.

Leicester's goalless draw with Wolves on the opening weekend made for a low-key start but it has done nothing to shake Brendan Rodgers' optimism. Only Manchester City and Liverpool have won more Premier League games since his arrival, and he has assembled a young squad of vast potential. Excitement is in the East Midlands air.

Having inherited the role of Leicester City chairman from his late father, Aiyawatt 'Top' Srivaddhanaprabha has renewed his family's commitment to the club. A new training facility is imminent. Player investment continues with the statement signing of Youri Tielemans. But much of the mood change can be attributed to the appointment of Rodgers in February.

Suited up on a sweltering summer's day at the club's Belvoir Drive training ground, Rodgers is quick to address that controversial decision to leave title-bound Celtic mid-season and, in particular, the thinking behind it. "It is never easy leaving a great club like Celtic and it was always going to be difficult whenever I left," he tells Sky Sports.

"The benefit of coming in when I did, which was the plan, is that I had the chance to see the players working under pressure last season. I had the chance to find out a bit more about them and then make the decisions in the summer. It worked out well because we finished the season in a good place and that gave us something to build on into this season."

While most of the Premier League's top teams spent their summer traipsing around the globe fulfilling their commercial commitments, Leicester's pre-season was more pragmatic. Aside from a brief break in France, it was spent inside their own training ground. The only away trips were to Scunthorpe, Cheltenham, Cambridge, Rotherham and Stoke.

"We spoke about staying as close to home as we could so that we could get as much work in as we could," explains Rodgers. "I have been involved in the commitments when you travel and there are a lot of commercial demands. For our first pre-season together, I felt it was very important that we lock ourselves down in the training facility as much as we could."

That training ground work continues to set Rodgers apart from many of his peers. He is the quintessential coach - happiest when improving players - but his man-management skills are impressive too. Tielemans was determined to stay after working with him, despite interest from big clubs. Jamie Vardy was soon reassured and producing his best form.

Kasper Schmeichel summed it up well when he described Rodgers as a 'modern leader' but this is a coach who, despite being only 46, has been working for almost a quarter of a century now. In Scotland, he was up against Steven Gerrard, his old captain at Liverpool. On Sunday, he will face Frank Lampard, a player during Rodgers' own days on the Chelsea staff.

How does he manage still to be seen as modern? "My principles remain very much the same, there is no compromise with that," he says. "But I have had to evolve because the management of players now is totally different from what it was even a decade ago. There is more transparency in the world now. Everything needs to be out there.

"So you have to be open with the players. If you look at the great managers, they have always been able to embrace that and I have always felt that you need to work closely with the players. Of course, there always has to be a professional line and an edge that they need to feel, but I love working with players, helping them and improving them. 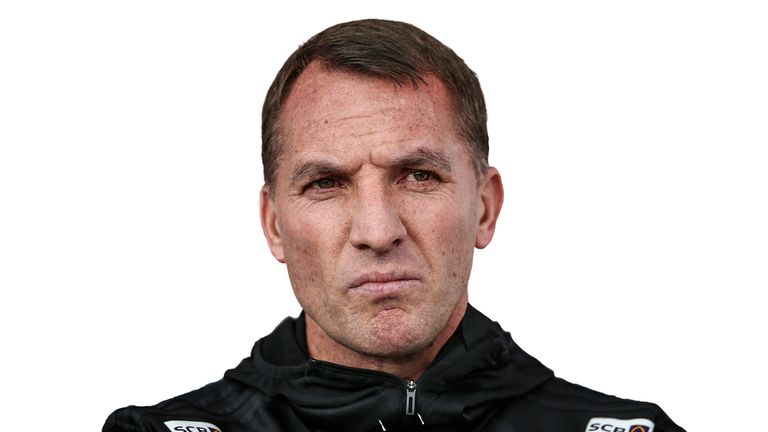 You are working with players from the age of 16 to around 35. And each year you move away from that. I think the trick is to stay in touch without making an idiot of yourself.

"If you think about it, each year of your life you are moving away from the age band that you will always work in. As a senior football coach, you are working with players from the age of 16 to around 35. That will always be the case. And each year you move away from that. I think the trick is to stay in touch without making an idiot of yourself. That's the key.

"I was very quickly onto the scene in management and had some good experiences and some bad experiences, but it's all learning and you do get better. Yes, I have been coaching for almost 25 years but I still have another 20 odd years left in me. It's nice to know and it's the advantage of starting young. You have the time to learn, to develop and to improve."

Rodgers' principles might remain the same but he returns to the Premier League with a slightly different status after his achievements with Celtic. At Swansea and Liverpool, he produced exciting football but, famously, could not quite get over the line with the latter in 2014. In Glasgow, there were back-to-back trebles. It has lent a different perspective.

"I am as focused as ever but it does relax you a little more," Rodgers admits. "Becoming a winner does give you something just as working with big clubs helps too. You develop players, you improve and you try to get the best results that you can but when you get the chance to win trophies then it just gives you that extra feeling of wanting it more.

"The Premier League is the most competitive league in the world so it is going to be very difficult for a club like ourselves but it's a great driving force knowing that you can achieve it. We know it will be difficult but once you've had a sense of it you do want to feel it again."

If Rodgers has changed, the Premier League has changed too. At the start of the decade, Swansea's commitment to possession football as a promoted club was regarded as unusual - even reckless - but it worked. Now, there is an expectation among the top six and beyond that there is an obligation to entertain. Again, Rodgers seems like a man ahead of his time.

"Today, it is not just about winning," he says. "Teams want to win in a certain way and owners want their teams to win in a certain way with an identity there. Hopefully, it is something that I have always had. When I was a young coach, it was always stressed to me that the game had evolved. You just find different ways and better ways to make it work."

Expectation at Leicester is an interesting concept. Logic dictates seventh would be a fine achievement given the resources of last season's top six and the ambitions of Everton, West Ham and Wolves. But, at this of all clubs, it is difficult to put a limit on what can be accomplished. The Foxes remain fearless and Rodgers would not want it any other way.

"I am fortunate here because I have a really fantastic group with a good mix," he says. "There is a lot of young talent that hopefully we can develop and improve, and the senior players have been fantastic since I came in because they have really taken on board how I want to work. That's been very important in terms of the leadership in the dressing room.

"Improvement can happen at any age whether it's 22 or 32. Thankfully, we have a squad here that constantly wants to improve. They are players that are coachable and are hungry. That is so important to me and I have loved seeing it. And next year we go to a new training facility that will allow us to develop players further. So it's an exciting time.

"Our motto here forever and a day will be that the impossible is possible. But I think there is a realism here too. Everyone knows how difficult it will be to break into that top six. For us, the aim is to be in the group in behind who are challenging that. We will embrace it. We will play with no fear. We will go and enjoy it and hopefully entertain our supporters.

"Let's see where it takes us."