Lionel Messi says winning one Ballon d'Or, let alone six, was 'unthinkable' after picking up his latest award in Paris

Barcelona and Argentina forward Lionel Messi has won the Men's Ballon d'Or for a sixth time.

Messi was involved in 63 goals in total in the past 12 months for both club and country, including 46 goals and 17 assists as the playmaker helped Barca to retain their La Liga crown.

"I would like to thank all of the journalists who voted for me and wanted me to have this prize," said Messi after picking up the award in Paris on Monday night alongside his two sons and wife.

I hope to continue for a long time. I realise that I am very lucky, even if, one day, retirement will ring. It will be difficult. But I still have beautiful years ahead of me. Time goes very quickly, so I want to enjoy football and my family.

"It was an amazing year, but there's a couple of players like that who are a bit unnatural," said Van Dijk, of Messi and Ronaldo. Four Liverpool players finished in the top 10 of the voting for the Ballon d'Or, but Virgil van Dijk says they could have had even more

"So you need to respect greatness as well. I was close, but there was just someone a little bit better.

"I'm very proud of what I achieved last year with Liverpool and the Netherlands, and hopefully we can do that again this year. But that will be tough with those guys around here still."

'I want to be here again next year'

Van Dijk admitted he had never expected to be in the running for the prestigious title.

"I never thought that I would be up for a Ballon d'Or until I was actually nominated," said Van Dijk.

"I had to work hard every step of the way, so to be here makes me very proud. And I want to work hard and be here again next year." 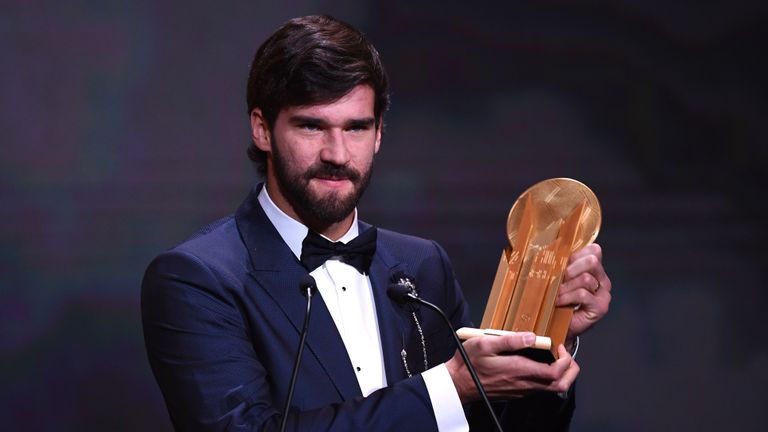 The other winner in the French capital was Juventus' summer signing Matthijs de Ligt, who took home the Kopa Trophy for the best U21 player of the past year.

The Netherlands international, 20, claimed the award ahead of Borussia Dortmund's England forward Jadon Sancho after helping his previous club Ajax to last season's Eredivisie title and the Champions League semi-finals.