Manchester City took control of the Carabao Cup semi-final with a 3-1 win over Manchester United at Old Trafford.

Ole Gunnar Solskjaer insists his team are making progress but there was little evidence of that as Manchester United were played off their own pitch in the first leg of their Carabao Cup semi-final against Manchester City. Adam Bate reports from Old Trafford…

"We are still in our own heads the biggest club in the world," Ole Gunnar Solskjaer had said in the build-up to the Manchester derby. He would not be wrong if United are basing that on the club's wage bill. Back on the pitch, where it matters most, his players showed everyone that they are not even close to being the best team in their own city.

A 3-1 home defeat to rivals Manchester City might not sound so emphatic but the reality was rather different. Pep Guardiola had won on his three previous visits to Old Trafford in the Premier League but never like this. United conceded three goals in the first half for the first time here in 22 years. The gulf between the two teams was obvious to everyone. 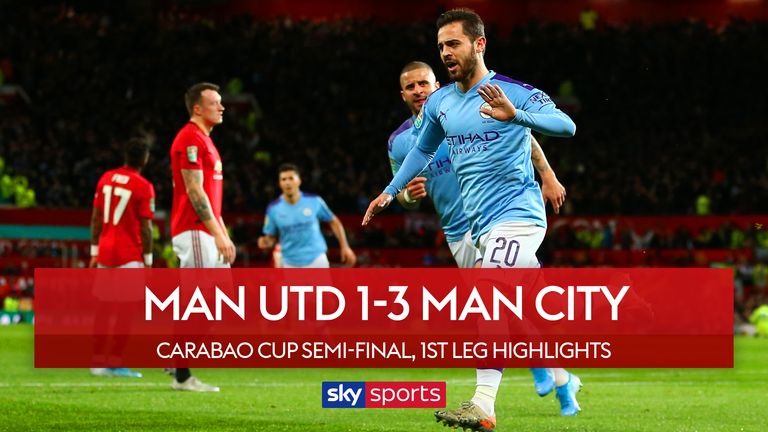 There really is a chasm between them and the way that they can play this game and it made for a frustrating sight for the home support. They wanted to get behind their side but that is difficult when watching Phil Jones pass back to David de Gea for the fourteenth time that evening. It did not help that De Gea usually followed it up with an aimless punt.

There were some crumbs of comfort for United, although it is perhaps indicative of just how bad this was that the scoreline was chief among them. Beyond that, Brandon Williams coped well in trying circumstances and the comeback of sorts at least hints at a spirit within this Manchester United team that significantly outweighs the quality within the ranks. 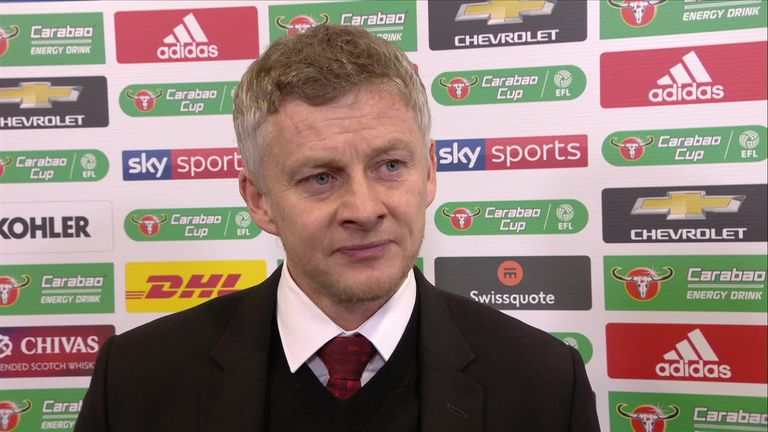 Ole Gunnar Solskjaer admitted that United could not cope with City

Solskjaer, of course, maintained the now familiar refrain afterwards that this is a young side. "I have said it a few times but it is not going to change between every press conference," he said. "I am still in that phase. This is a young team and we are learning. It needs to stick and it will stick and the second half at least gives me something to believe in."

This is a journey but where is he leading them? It is a process that takes time to build but what exactly is he building? On this evidence, not an attack from the back, that is for sure.

As early as the third minute, the paucity of ideas became apparent as United knocked the ball around in defence, looking at constant risk of losing possession, before going back to De Gea and seeing him boot it up the field anyway. That happened again. And again. When it was over, De Gea had hit 13 long balls and found a team-mate with just one of them.

Manchester City's pressing was just too much for the centre-backs to cope with in the first half. The panic whenever the ball went near them was palpable and they lacked the skill to find a path through. But this was not just about their lack of quality or even the intensity of their opponents. Basic pattern-of-play work was lacking and that should be a major concern.

Early in the second half, Victor Lindelof threw his hands up in despair because nobody ahead of him was showing for a pass. Soon after, it was Williams wondering where his team-mates had gone. There seemed no certainty whatsoever about how to construct an attack.

Indeed, one would not have been entirely confident that United knew how they intended to progress the ball up the pitch even if the opposition were not there trying to stop them.

A couple of passages of play highlighted the difference. Firstly, there was the lengthy passage of play just before the half-hour mark when City kept the ball with alarming ease for a couple of minutes - dispiriting the United players and supporters alike.

That was followed by groans of frustration as De Gea looked long again when the ball was finally retrieved. Next time he had it, he passed it straight to a City player before Jones - in utter desperation - launched a leg at the ball and sent it out for a corner. It was shambolic.

"Ole Gunnar Solskjaer, we want you to stay," sang the City support.

There was another contrast in the second half when fluid build-up between Raheem Sterling and Kevin De Bruyne paved the way for Riyad Mahrez to force a good save from De Gea. With United back in possession they attempted an ambitious long ball in the hope of springing Rashford away but that was cut out. Cue more audible fan frustration.

And yet, Rashford's goal came not long after that as City paid a price for their profligacy. It would be a stretch to say that United deserved it but it at least reflected their improvement after the interval. The worry for Solskjaer will be that it took his intervention at the break to refocus minds. "It can't be me coming in at half-time," he said afterwards.

Nevertheless, it is a positive sign that he was able to make an impact on his players. Heads had dropped but he lifted them - and his influence was tactical as well as emotional.

Guardiola had outfoxed Solskjaer in the first half - playing without a striker and asking Bernardo Silva, scorer of the first goal with a sensational strike, to float around instead. It was a conscious attempt to negate United's counter-attack that had done for City at the Etihad last month. Guardiola did so the only way he knows - by keeping the ball even more. 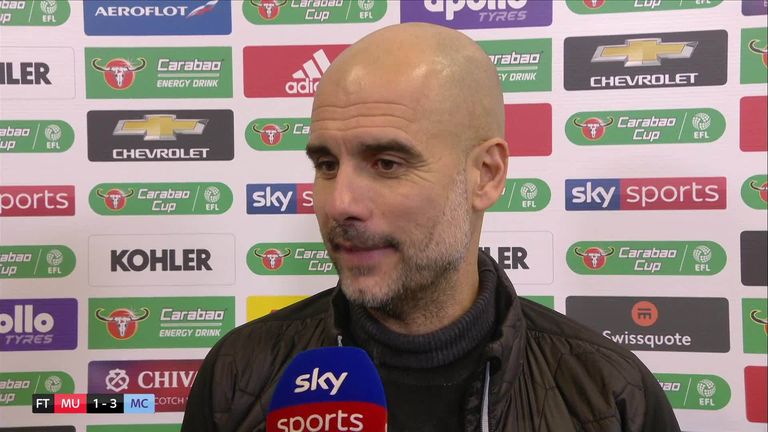 Solskjaer went some way to solving the problem by bringing on Nemanja Matic for the anonymous Jesse Lingard and giving United an extra body that little bit deeper. Mason Greenwood took up some interesting positions, dropping deeper too, while Rashford and Daniel James moved in from the flanks.

"In the second half, they changed and we struggled more to press," admitted Guardiola.

The result was that United had more of the ball and it was not so easy for City either. Guardiola spent much of the second half screaming at Rodri, who struggled to adapt to the change. "It is not easy when they have a process in the first half and they change and you have got to anticipate that," added the City coach.

Credit to Solskjaer but even this minor tactical triumph was telling. He is adept enough at reacting to what an opponent does. What Manchester United struggle to do is have ideas of their own. They lack the ability to set the tone of a game with the ball at their feet in the way that Manchester City and Liverpool seem able to do.

United are barely trying to build attacks in the same way. Solskjaer's admirers continue to argue that this is because he does not have the personnel at his disposal but it is not just that. Not when Brighton have had more sequences of ten passes or more this season. Not when they have had more such passages of play leading to a shot.

This is a problem of personnel but it is also one of coaching.

Solskjaer has constructed a reactive team, one that can hit opponents on the break but one that utilises pace but not skill. A team short on quality and short on the qualities that are needed to succeed. It is football unrecognisable from what City and Liverpool are serving up.

And he maintains that he just needs time.

Time will only close the gap if it is being used to take this team in the right direction. For all the heart. For all the fact that, as bizarre as it might seem, United fans trudged away from the Theatre of Dreams grateful to have been spared the nightmare that looked inevitable at half-time, there was little sign of that at Old Trafford on Tuesday night.