FC Copenhagen have become experts at finding value in the market. Ahead of their Europa League tie against Celtic, Adam Bate spoke to the club's technical director Johan Lange to find out how they do it...

Celtic are odds-on favourites to progress in their Europa League tie against FC Copenhagen, but it would be a mistake to think there is nothing to learn from their Danish opponents.

Copenhagen have become the masters of the transfer market.

Few clubs in Europe can boast their hit rate. Their ability to find value in the market and turn quick profits, all while continuing to win trophies domestically and compete on the continent, marks the champions of Denmark out from the rest.

The list of player sales in recent transfer windows is remarkable.

Denis Vavro was sold to Lazio for £9.5m in the summer with Robert Skov joining Hoffenheim for £9m. Both had been signed for a fraction of those figures just two years earlier.

Copenhagen have been flipping players this way for years and winning titles along the way - twelve of them since 2001. "We are one of the few clubs in the world that have earned the right not to be asked what our objectives are before the season begins," says Johan Lange, the club's long-serving technical director. "Everybody knows."

In Europe, the consistency is remarkable. Copenhagen are one of only 15 clubs to have competed in the group stage of European competition in 13 of the past 14 seasons. It is a list that includes Real Madrid, Barcelona and Bayern Munich. The difference is that Copenhagen had to qualify just to reach the group stage in all but one of those seasons.

"That is a unique record, one that we are very proud of."

So how have they managed it? What is striking is the consistency, not just in terms of the results but the identity of the personnel delivering them.

Stale Solbakken has been Copenhagen's manager for the past seven years having had an earlier five-year stint in charge. Lange was his assistant during that first spell but has spent the past six years in this new role as technical director, overseeing the club's vision.

The clarity of the model is easy to admire but few have been able to replicate it. Lange picks out four key principles that have been essential to the club's sustained success.

"We have a strong culture, a proactive strategy, stability among key personnel and a very clear style of play," Lange tells Sky Sports.

"Without those four things, I don't think we would have had any chance of punching above our weight in the European competitions for such a long period."

Lange's pitch to prospective new signings is straightforward but compelling. 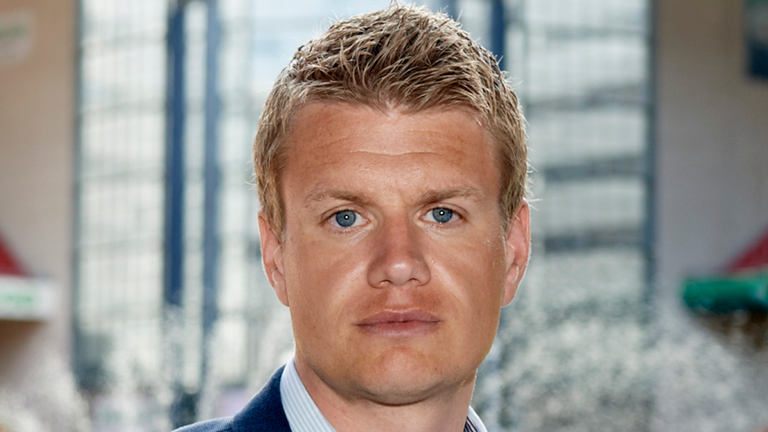 They will go through a development process that will mean they get sold to a club in a top-five league. The idea is that they learn, they improve and then we sell them.

"What they will gain here are three things," he explains. "Firstly, they will win trophies. We can say that based on our history. That will be nice for them to look back on in their career.

"Secondly, they will play European football and get to test themselves at the next level. And the third thing is that they will go through a development process that will mean they get sold to a club in a top-five league. The idea is that they learn, they improve and then we sell them."

It has become a virtuous cycle for the club because with every success story, the next batch of talented young players are even more inclined to choose Copenhagen.

"We have a lot of good examples to showcase," says Lange. "That helps us with the recruitment. If we didn't show that we could sell players on, we wouldn't be able to bring in that talent. We have to sell players to be able to attract the next players.

"It has become a partnership between the player and the club."

Lange adds: "It is also a major investment for us. We are not in a position to sign ten players every summer. No, we have chosen to sign you. We have scouted you for a long time. You are the one. This partnership will have ups and downs but we are committed to it because if it goes wrong then it is bad for your career but it is also bad for our club."

Buying clubs also know what they are getting.

"Clubs that buy from us know that a Copenhagen player is used to the pressure of winning. You have to win. We are the biggest club in Scandinavia so there is a demanding crowd with the right to be demanding. Clubs also know that our players have had to compete in Europe against teams that are better than us as well. They get that full experience here."

In that respect, Lange's job should be getting easier. And yet, in another way, it is only becoming harder. The financial disparity is growing between Europe's richest leagues and the rest. Globalisation means that where once Copenhagen might have had the monopoly in Scandinavia, now they must look to new markets to stay ahead of the game.

"The market has gone through a lot of inflation," says Lange. "The markets where we were traditionally recruiting from have gone up 110 per cent in recent years so that obviously makes it more difficult. There are a lot of reasons for this. Clubs in Asia and America are investing heavily and that has had an impact on the prices in the market.

"We have to look further afield. The days when we could have a Scandinavian international within the club for four or five years have gone. The turnover of the squad is faster than it used to be. That demands even more from our model. The onus is on us to upscale young players who can perform in Europe faster. Without a clear strategy, it would be impossible.

Frederik Leth has been appointed as the club's head of scouting and analysis with a strong emphasis on a data-based approach. This use of statistical analysis has opened up new markets. Federico Santander was signed from a club in his native Paraguay before being sold on to Bologna in the summer of 2018. Eastern Europe is fertile ground now too.

"At the identification phase, our process is very data driven," explains Lange. "We are trying to find players earlier in their career. That is difficult to predict but it is important to try.

"The partnership between myself, the manager and the scouts is crucial. We take time at the start of the process to establish exactly what we are looking for. Then we can set the parameters with the data. It is only after that stage that it becomes about live scouting.

"It helps that everyone knows their job and that Stale Solbakken has a clear style of play. It is difficult for the scouts if the style is changing from season to season. Our scouts know that their job is to find players who have the potential to play European football for Solbakken's Copenhagen with the capacity to be sold on to a top-five league within a few years.

"It is better for us to find those players who have that capacity than those who do not, even if they are perhaps starting from a higher performance base.

"For example, if you watched Denis Vavro's performances for Zilina in Slovakia, you would not have seen a player whose performances were ready for a top-five league but the potential was definitely there. That is an example of recruitment based on our newer strategy, one that we have tried to fine tune over the past three or four years."

There is still a place for the more experienced player. Nicklas Bendtner passed through Copenhagen recently, while players such as former Brentford defender Andreas Bjelland and club captain Zeca, both 31, will be expected to lead the way against Celtic. "We need balance. The younger players need those players alongside them to fulfil their potential."

But the strategy is clear. And whatever the result against Celtic, it is a template that Copenhagen are hoping will sustain their success for many years to come.