Jack Grealish and James Maddison can play together for England, says Dean Smith

Aston Villa boss Dean Smith believes there is room for Jack Grealish and James Maddison in the England squad.

Villa captain Grealish has been tipped to win a debut England call-up for the Euro 2020 warm-ups against Italy and Denmark this month.

Maddison made his England debut in November versus Montenegro and will be hoping to have earned a recall for the upcoming friendlies.

The pair will face each other when Leicester host Villa on Monday, live on Sky Sports, and Smith feels they can feature together for England.

He said: "They are different players playing for different clubs with different styles. Jack has proved to me already what he can do in the Premier League.

"He's not been in the Premier League because Aston Villa have been in the Championship for three years but he's proved to everyone what he can do and has been one of the top five players this season."

Villa are second bottom in the Premier League, two points from safety, after losing their last three top-flight games.

Leicester are winless in their last four league games and lost to Villa in the Carabao Cup semi-final last month.

They are third in the table but Smith believes the Foxes can keep challenging Liverpool and Manchester City for the title in the coming seasons.

He said: "They've shown it for long periods this season. They've dropped off but it's tough because [Liverpool and Man City] are two exceptional teams.

"But they are the closest to them at the moment and it will depend on what they do in the market in the summer." 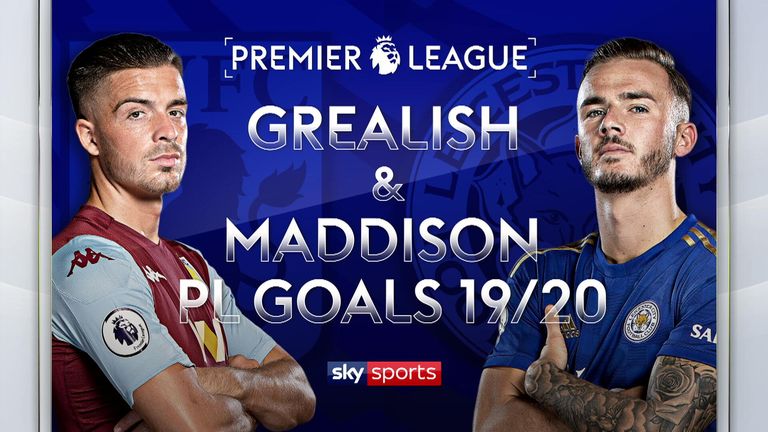 Ahead of Aston Villa's showdown with Leicester on Monday night, we take a look at some of Grealish and Maddison's goals this season

Victory would lift Villa out of the relegation zone after rivals Bournemouth and Watford lost at the weekend but Smith refused to think about their position.

He said: "I don't look at it, the players may look at it. As far as I am concerned we have 11 games left and if we win them we are comfortable.

"If we win the one we have in hand we are out of the bottom three. It is certainly not all doom and gloom. It is not where I want to be, obviously.