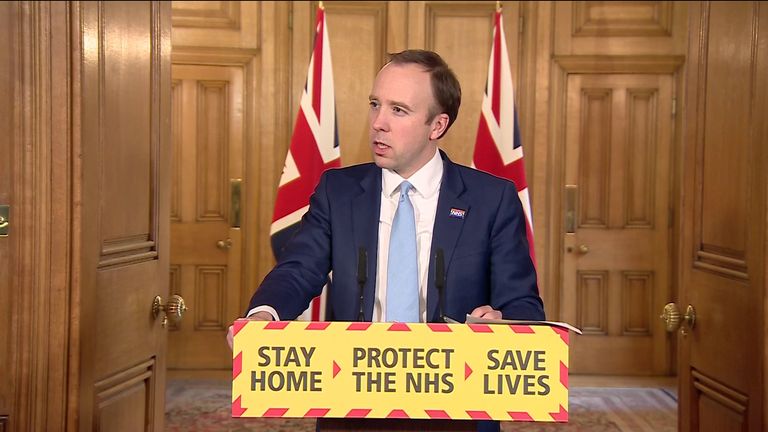 No agreement was found after talks between the Premier League and the Professional Footballers' Association (PFA) over potential wage cuts or deferrals on Wednesday, and it will again be discussed in their latest emergency meeting on Friday.

Players' wages have been a hot topic after four Premier League clubs (Tottenham, Newcastle, Bournemouth and Norwich) placed non-playing staff on furlough leave - a government support scheme that pays employees 80 per cent of their wages while they are not working - while no announcement for players salaries has been made.

Hancock said: "Given the sacrifices people are making, including some of my colleagues in the NHS, who have made the ultimate sacrifice and gone into work and caught the disease and have sadly died, I think the first thing Premier League footballers can do is make a contribution; take a pay cut and play their part."

The PFA, who wrote to players this week to warn that it is "vitally important" they speak to their union before accepting wage cuts, has denied reports suggesting it would block all wage deferral requests made by clubs.

A statement read: "Contrary to some press reports the PFA has never stated that it will block all wage deferrals. What we have sought to put in place is a structured and unified approach to ensure a fair response across the leagues.

"The players we have spoken to recognise that the non-playing staff are a vital part of their club and they do not want to see club staff furloughed unfairly. Any use of the government's support schemes without genuine financial need is detrimental to the wider society.

"We fully accept that players will have to be flexible and share the financial burden of the COVID-19 outbreak in order to secure the long-term future of their own club and indeed the wider game."

Despite an agreement not being in place, some players have already seen their pay reduced.

In the Championship, Leeds players have volunteered to defer their wages, while Birmingham asked their squad to accept 50 per cent deferrals on their pay. League One Portsmouth have placed their players and staff on furlough.

Bournemouth manager Eddie Howe and Brighton boss Graham Potter are the only two Premier League managers to have agreed a voluntary pay cut.

This week, Barcelona and Atletico Madrid said their players will take a 70 per cent pay cut to help the clubs pay their staff.