League One and Two working groups created amid COVID-19 disruption

PFA creates working group with six captains from League One and Two clubs, with aim of reaching collective agreement on wage deferrals

League One and Two club officials have created a working group to address the issues facing the bottom two tiers of the English professional game.

The group, which consists of owners, chairmen and chief executives, has written to the EFL to express what they feel are the pressing issues for their clubs.

A number of EFL club owners have told Sky Sports News this week that unless a dramatic reduction in player wages can be agreed, then many clubs will go bust before the end of June.

In a letter seen by Sky Sports News, the group has drawn the EFL's attention to a number of areas they feel need urgent action, while also expressing a "strong desire" to complete this season by the end of July.

Clubs are keen to ensure no additional payments are made to players for completing the season.

They insist players will be paid until the end of July should the season be extended until that time, adding they would expect them to continue playing without contract extensions or further payments.

All clubs have committed to individual negotiations with players as well as relevant parties around salary deferrals or reductions. 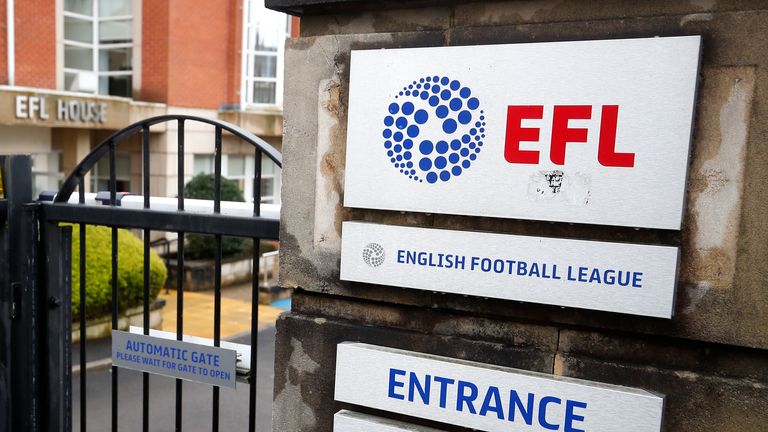 The Professional Footballers' Association (PFA), meanwhile, have set up a working group with captains from League One and Two clubs in the hope of reaching a collective agreement on wage deferrals.

A total of 25 captains from across Leagues One and Two expressed a desire to be part of the working group. The six captains chosen to join the panel were: Peter Clarke (Tranmere), John Mousinho (Oxford), Matt Bloomfield (Wycombe), Matt Harrold (Leyton Orient), Scott Cuthbert (Stevenage), and Mat Sadler (Walsall).

Earlier this week, the PFA agreed a framework with the EFL to defer 25 per cent of player wages for April across Leagues One and Two.

The captains will discuss the framework as well as player contract situations - with many deals expiring at the end of June and no guarantee matches can resume by then, despite tentative plans.

May 16 has been pencilled in by the EFL as a possible return date, although it remains to be seen if that will be impacted by Thursday's government statement, extending the UK-wide lockdown for another three weeks.

Sky Bet Championship clubs are not involved in the working group and will instead individually negotiate their own agreements with playing staff.