Football Manager 2020 simulated the rest of the Sky Bet League Two season. Here are the results...

The Sky Bet League Two 2019/20 season was supposed to come to a conclusion on Saturday, but who would have been promoted, relegated or reached the play-offs?

If the campaign had continued as normal than the final round of fourth-tier games would have taken place today, and we have turned to Football Manager 2020 to find out what may have happened throughout the rest of the campaign.

Football Manager have used their unique software to simulate the rest of the season, and to see how the table would have shaped up...

The League Two season would have reached a thrilling conclusion had the season finished on schedule, according to Football Manager.

Swindon edge out Crewe for top spot after an incredible run of form saw them lose just one of their remaining 10 games. That loss comes on the final day away at Macclesfield with the title having already been wrapped up the week before with a 1-0 win over Leyton Orient at the County Ground. A 2-1 win over Salford in their game in hand sent the Robins top and they never looked back from there.

Crewe finish just a point behind Swindon as their 2-0 win over Cambridge on the final day pulls them to within a whisker of Swindon's total. Crewe also lose just once during their remaining fixtures in a 1-0 defeat to Mansfield back in March, but a run of five successive wins after that secured promotion for them on Good Friday.

Plymouth recorded two wins, one loss and six draws from their remaining games but that patchy record is still enough to secure promotion to League One. A crucial 2-0 win over Walsall on Good Friday pushed them clear in the race for third spot, with successive draws in the two following matches clinching a return to the third tier at the first time of asking. 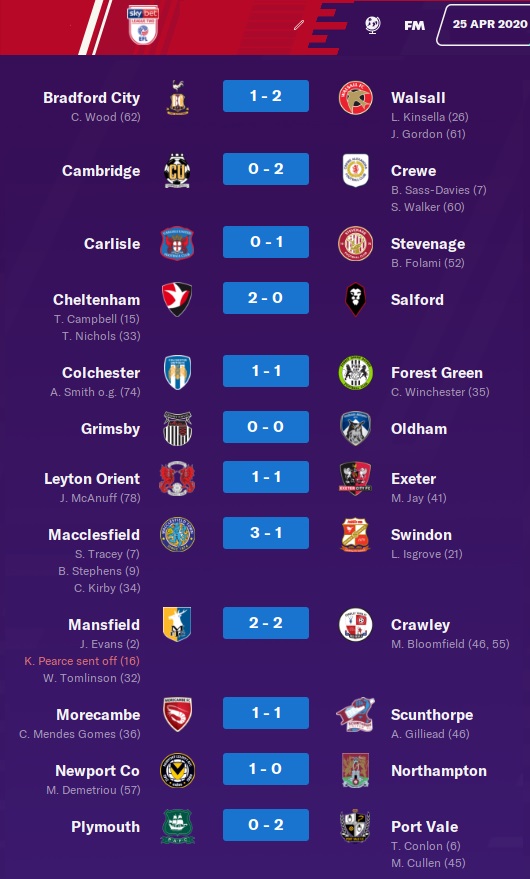 The play-off race has been incredibly tight all season long and that continues right down to the last game of the campaign.

Port Vale emerge as the form team over the last 10 games of the season, reeling off three wins and a draw in April to put themselves in the driving seat for a play-off spot. A 2-0 win over already promoted Plymouth on the final day secures fourth place for The Valiants.

Also joining them in the play-offs are Cheltenham, who recover from a shocking run of three defeats and a draw between the end of March and early April and bag themselves fifth place with a 2-0 win over Salford at The Jonny-Rocks Stadium.

Exeter just miss out on fifth place on goal difference but will be left wondering what might have been after an abysmal run of form sees them fall well behind local rivals Plymouth and almost slip out of the play-off places altogether. A solitary win, ironically against Cheltenham, is the sole highlight from their last nine games but a 1-1 draw with Leyton Orient on the final day books them a rematch against Cheltenham.

The real final day drama takes place at Valley Parade and the JobServe Community Stadium as both Bradford and Colchester have a very strong chance of claiming the final play-off place with just two points separating them. Stuart McCall's men know that a win would guarantee them seventh spot but fall 2-0 down to mid-table Walsall with just over an hour played. Connor Wood grabs a consolation for the Bantams but they're unable to turn things around in their favour.

All eyes turn to Colchester and their game against Forest Green. Carl Winchester puts the visitors in front after 35 minutes before an Adam Smith own goal levels things up with 15 minutes left to play. Despite a couple of late half-chances, Forest Green hold on and ensure that Colchester will be playing League Two football next season.

At the bottom end of the table, Stevenage's relegation is confirmed in early April but their fans can at least take some consolation from the fact they end the season with back-to-back wins against Cheltenham and Carlisle.

Morecambe finish four points above the drop with crucial wins against Leyton Orient and Crawley helping them to avoid relegation. Macclesfield and Mansfield are able to pull themselves further clear of the bottom but Orient and Carlisle slip down a few places, finishing 21st and 22nd respectively.