Graeme Souness: "It's going to be very difficult to get everyone to agree to it because everyone is looking after their own house right now"

Graeme Souness admits he can understand why clubs battling to stay in the Premier League will oppose the idea of finishing the season at neutral venues.

Premier League clubs remain committed to finishing the 2019/20 season, but this will only be possible if eight to 10 neutral venues are used to play the remaining fixtures.

Speaking on The Football Show, Souness believes it will be very difficult for the Premier League season to be completed with games at neutral venues.

"It comes down to money. We talk about the Premier League being awash with money, but if this really bites, some Premier League clubs could be in dire straits financially."

Souness told Sky Sports: "It's going to be very difficult to get everyone to agree to it because everyone is looking after their own house right now. If the clubs are objecting to it, it's because they feel it gives them less of a chance of staying in the Premier League.

"I think there's a real argument for that. Teams near the bottom need every advantage they can possibly get. For Brighton, for example, who have five home games - although they're against big teams - they'll see playing at the Amex as an advantage. 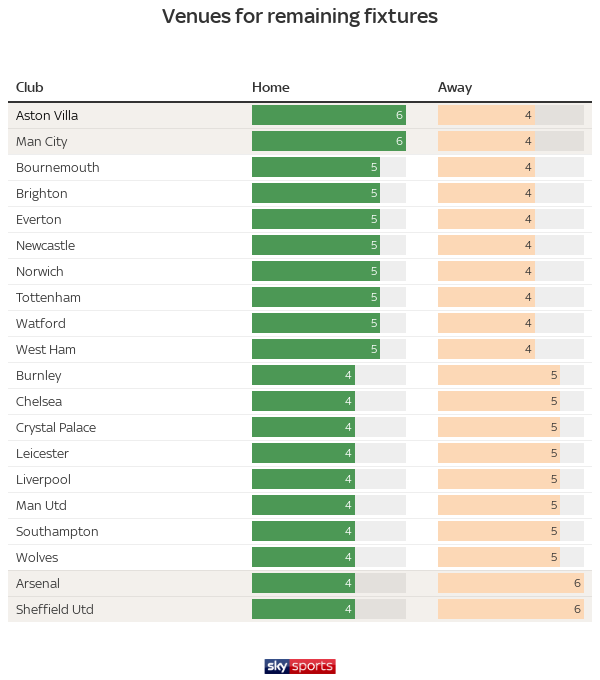 "It won't just be the smaller ones who don't have such a big budget, some of the bigger clubs will struggle because of the outlays they have. If you're spending more than you've got coming in, ultimately you're going to be in trouble and that's the top and bottom of football."

It is understood clubs were told on Friday limiting action to a handful of selected stadiums was the only way it would be possible to complete the remaining matches of the 2019-20 season for safety reasons.

Redknapp: Everyone has their own agenda

It's understood that the latest updates to 'Project Restart' were well received but there remained opposition on competition and integrity grounds about using neutral venues, with Barber confirming Brighton are among those with reservations.

West Ham, facing a very similar relegation battle to Brighton, would also prefer their home games to be played at the London Stadium.

Jamie Redknapp told The Football Show: "If we can get to a situation where everyone buys into the use of neutral venues then we'd take it as then we'd be in a position to play football again, but everyone is thinking of themselves right now.

"Of course football needs to restart at some point, but safety has to come first and we've seen players speak out about this. They're nervous as they've got families. A lot of players have parents who have underlying health problems so you've got to be extremely careful.

"Everyone has got their own agenda. I remember during my last season at Southampton where everyone's wages would have gone down by 40 per cent if we were relegated. For that reason, there will be a lot of clubs thinking 'why should we start again?' Why take that risk of getting relegated and then losing wages and seeing jobs cut?

"I know in Ligue 1 we've seen clubs relegated but I cannot see that happening in the Premier League. I cannot see that situation as there would be so much litigation that would follow. It would cause so many problems if they were to relegate the bottom three.

"Bournemouth, Norwich and Aston Villa would go absolutely crazy and I can't see that happening.

"What about the players? Some will want to play, and some won't. They've got the right not to play until they feel comfortable. Some people will enjoy playing with no crowd.

"Some I've played with Monday to Friday and they've been fantastic but then they'd give the ball away constantly on a Saturday. A lot of players won't enjoy it."

Brighton, in 15th place on 29 points, were due to be at home for five of their remaining nine matches as they fight for Premier League survival, while a relegation rival could in fact benefit if games were played across neutral venues.

Three of Bournemouth's four remaining away games are against top six clubs - Manchester City, Manchester United and Wolves - meaning they might be receiving an advantage by not having to play those fixtures at the respective home ground of their opponents. 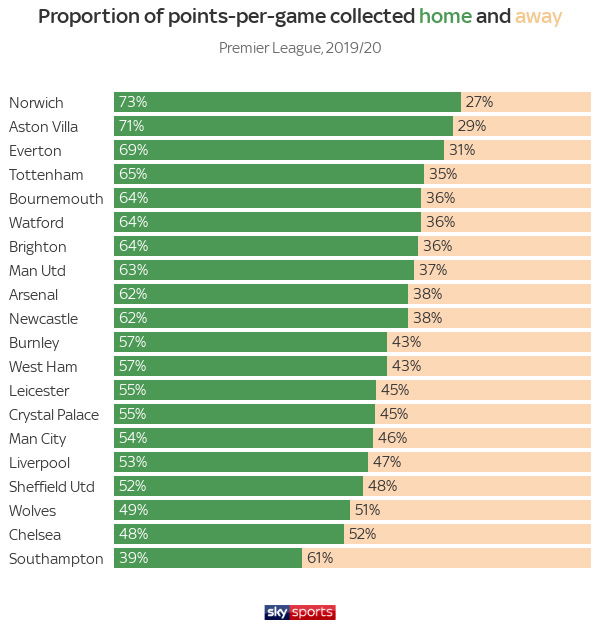 But Souness believes, irrespective of venue, clubs will want to avoid facing teams with plenty still at stake during the run-in, just like in any other campaign.

Souness added: "When you're down there, fighting for survival, you want to be playing teams who've got nothing to play for. They may have teams who have nothing to play for as the difference between winning and losing games can be very small margins.

"It's hard to make a calculation. When Bournemouth finished the season brilliantly in the past, they played teams who didn't have a lot to play for, but to get a majority on this will be very difficult.

"There will be times when we'll be taking two strides forward, and we'll take three back. That's how I see it going forward. I'm not sure you'll be able to get all the clubs to agree."

Sunday Supplement view: How can you bend PL out of shape?

Debating the situation on the Sunday Supplement, Darren Lewis (Football Writer at The Daily Mirror) and Matt Lawton Chief Sports Correspondent at The Times) feel playing at neutral venues changes the competition that is already two-thirds complete...

Darren Lewis: "Since last week it's all moved on because the players have now come out a voiced their opposition to it. There has been a considerable shift in the appetite among fans as well.

"I'm very much a believer that if we are talking about retaining the sporting integrity, how can you bend the competition out of shape? How can you play a competition for two thirds of season when clubs are able to enjoy home advantage and then suddenly play the final third of the competition in other parts of the country or in Perth."

Matt Lawton: "You are already playing in an environment with no fans but if you give away that small advantage of playing on your own pitch, and all pitch dimensions are different, and the home comforts of your own dressing room, if you give that away as well and then you get relegated, you can see why clubs would be very unhappy about that.
It's a huge departure from the competition they signed up for in August.

"That is what the clubs, particularly at the bottom and particularly those that are in danger of losing their Premier League status and all the riches and profile that comes with that, are nervous about."

Analysis: 'Even one vote could scupper restart'

Journalist Matt Lawton believes resistance against a restart by just one Premier League club could ultimately result in the current season being abandoned.