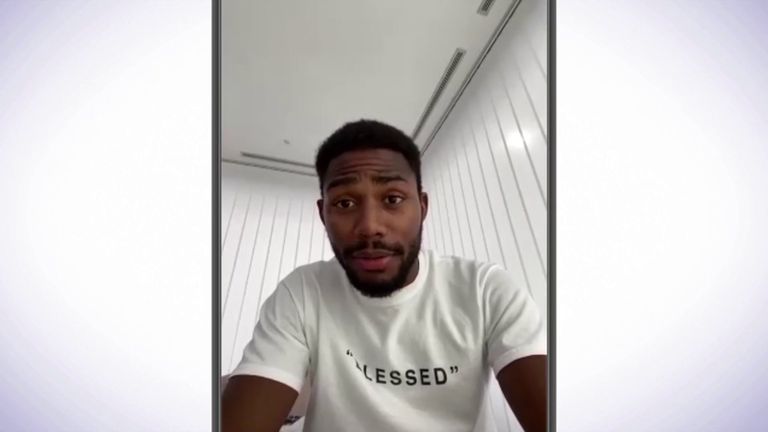 Club Brugge striker Emmanuel Dennis found out his team had won the Belgian title in unusual circumstances, in what could be his final season at the club.

The 22-year-old Nigeria international has been linked to a move away from the Jan Breydel Stadium, with manager Philippe Clement telling Belgian media this week that there is "a lot of interest" in the player.

Speaking about his future, Dennis told Sky Sports News: "I like challenges. I've been here for three years. My focus right now is I have one more game this season - the Cup Final - which I want to win, that's really important to me.

"After then, we'll see what happens, you never know."

Club Brugge were 15 points ahead of second-placed KAA Gent with one game left before the season-ending play-offs when football was suspended in early March due to the coronavirus pandemic.

The Belgium government has since decided to keep sport in lockdown until July 31, which accelerated a decision from the football authorities to resolve the outcome of the Jupiler League, with Club Brugge officially crowned champions on Friday.

"I was at my friends', we were playing ping pong," he says. "I saw somebody tagged me in something and I went to look, I said to my friend, 'go and check', and he said 'yeah, you're champions, congratulations'.

"Normally we would have a party but that's not possible right now so what I'm going to do is stay home with my friends and girlfriend and just drink some champagne."

Despite its underwhelming end, it's been some season for Dennis - his crowning moment was firing two goals past Real Madrid in their 2-2 Champions League draw at the Bernabeu last October.

He also scored in Brugge's 1-1 home draw with Manchester United in the Europa League in February, finishing the season with nine goals in 31 appearances.

"Against Manchester United was a highlight," he says. "Madrid is a big team, the best in the world, but I was disappointed because I wanted us to win and we drew. I wanted that three points. "I was happy because I was speaking with friends and they said 'imagine you play against Real Madrid'. I said I'm going to score and I'm going to do the Ronaldo celebration and they were like 'what, are you sure?' and I said 'yeah', so we bet.

"I was excited to score and do the celebration, I was very happy that day. But I was happier after a few weeks, I was on my phone and I saw the picture of my celebration and I thought 'you scored in Madrid', the excitement came after a few weeks. It was crazy.

"My brother is a Manchester United fan, a crazy one, he's always angry when they lose. So then I played against them and scored and he said 'OK, I'm proud of you'."

If he was to come to the Premier League, there'd be some familiar faces waiting. Dennis is good friends with Aston Villa's Marvelous Nakamba and Wesley Moraes, who he's been in touch with during the lockdown.

"Nakamba is like my brother so we talk, and with Wesley also, we make jokes," he said.

"I'll say 'how is it over there?', and they always say, 'this place is difficult, they like to gym all the time', and I say 'this is the Premier League my friend, you have to work'."