The speculation over Timo Werner's future has intensified with the news he is "ready to sign for Liverpool" if his £52m release clause is met. His name has long been linked with the European champions and they are not the only Premier League club said to be monitoring him.

Werner reminded the world of his talents with a hat-trick on Sunday - helping his side cruise to a 5-0 win at Mainz - and will look to maintain that form against Hertha Berlin on Wednesday.

This season has been his best yet, with 30 goals scored in 38 games so far, taking his overall total for RB Leipzig to 91 in 152 appearances. For the German national side, he boasts a total of 11 goals in 29 games.

A statistical comparison with Salah underlines his effectiveness. In fact, the underlying numbers show that Werner has outperformed the Egyptian this season in terms of expected goals, averaging 0.63 xG per 90 minutes compared to Salah's 0.47. He is slightly behind Salah for touches in the opposition box, but he matches him for dribbles. 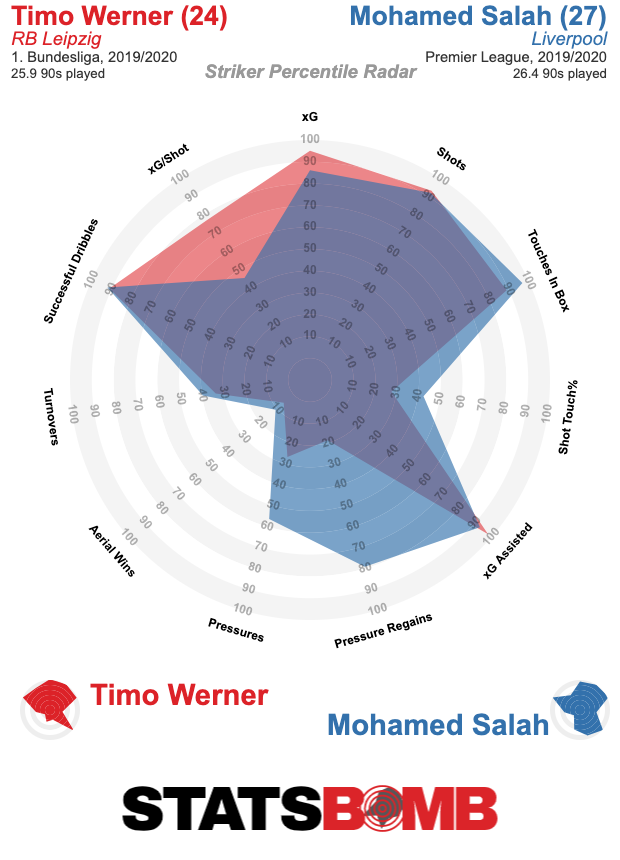 Another factor in Werner's favour is his age. The forward has already amassed close to 300 senior appearances since making his professional debut for Stuttgart in 2013, but he only turned 24 in March.

His suitors will be confident that his best is yet to come and his profile is sure to be appealing to Manchester United as well as Liverpool. Ole Gunnar Solskjaer's side showed considerable attacking improvement after the January arrivals of Bruno Fernandes and Odion Ighalo, but there is still room for reinforcements in the central striking position.

Solskjaer has spoken repeatedly about United's need for a finisher who can score the "tap-ins and ugly goals", and while Ighalo provided a short-term solution to the problem, it's easy to see why they might favour Werner for the long term. This season, all but two of his Bundesliga goals have come from inside the box.