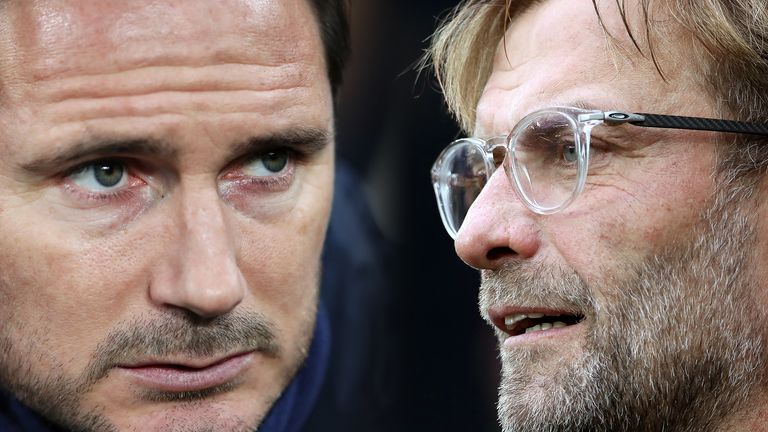 Premier League managers: 'We have to help lower leagues'

Premier League managers including Jurgen Klopp and Frank Lampard have called for football's elite to unite to help lower-league clubs through the financial impact of the coronavirus pandemic.

Prime Minister Boris Johnson announced plans to reintroduce spectators to sports venues from October 1 have been postponed for potentially six months following of a rise in Covid-19 infections.

The English Football League has warned it faces a £200m collective loss if spectators cannot return in the 2020-21 season.

EFL chairman Rick Parry admits the league needs a financial rescue package soon, although the former Liverpool chief insists the onus is not only on the Premier League to bail out the lower tiers.

He told the Daily Mail: "It is going to be a long winter. We do need rescue packages, we have said it pretty consistently. We need them soon. That has to be resolved. But we are confident it will be.

"I'm not going to criticise the Premier League. We're in constant dialogue with them and remain calm and confident we'll get a solution but we are looking at alternatives.

"Some (clubs) are going to be struggling by the end of October, a lot will get through to March because they've planned prudently."

The Shadow Culture Secretary Jo Stevens blamed a lack of an effective 'test-trace-isolate' system for the delay to supporters returning. 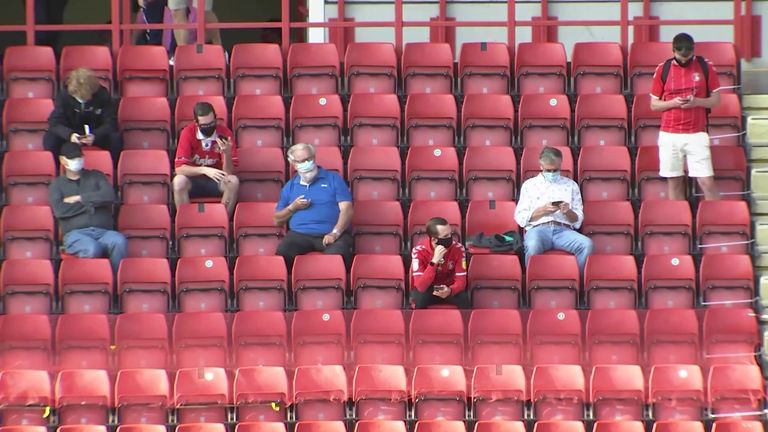 The chair of the DCMS select committee, Julian Knight MP, told Sky Sports News he "was not certain" the government needed to postpone the re-introduction of fans in stadium after the "tremendous efforts" of clubs to input safety measures.

He said the government had "question marks" after supporters congregated outside stadiums during last season.

Mr Knight called for a financial bailout for sport as soon as possible, but added "the strong should look after the weak in football".

Klopp: Those in a better position should help

Liverpool manager Jurgen Klopp hopes a collective approach towards a positive resolution can be found.

"I think people in a better position should help other people," he said.

"But the position for all clubs at the moment isn't easy. I don't know really how the government finds time to think about that. But I get it 100 per cent.

"Football should try to help themselves - or ourselves. I agree with that 100 per cent."

Manchester United boss Ole Gunnar Solskjaer knows the importance of protecting the football pyramid - but is also acutely aware of the impact having no fans in grounds for the coming months will have on top-flight clubs.

"The situation we are in and the virus and everything, it is so difficult to predict what is going to happen and now when the rate is going up and fans aren't coming in, it is even worse for football and society in general," Solskjaer said.

"So yes, I am worried for League One and League Two clubs, lower teams, of course we are - but all the Premier League teams are losing money.

"Hopefully we can get back and football will be normal and we won't lose too many clubs.

"How can we do it? We need clubs locally. We have seen Bury, we have seen Macclesfield, Wigan, in trouble, so it's not a nice situation to be in."

'Football in South Yorkshire must be protected'

Blades boss Chris Wilder feels the region would be a poorer place if any of its clubs went under because of the coronavirus pandemic.

"In the area which we live in, we are extremely proud of all the clubs which are strong and keep the area going," Wilder said. "What football plays in this part of the world is huge.

"We are not a one-club city and we are not a two- or three-club area. Football is a huge part of life in South Yorkshire and it needs to be protected."

Leeds boss Marcelo Bielsa added: "There's two points we can take from this - football without fans is less football, but when facing such issues as we are facing right now, football is less important."

Arsenal made 55 redundancies across football departments because of the financial impact of the coronavirus pandemic.

"The club is playing without the fans and financially the implications that has, how that can still be sustainable, (I think about) the things we have to achieve as a team to try to improve those finances as well," he said.

"I think it's crucial for every club that this doesn't have too much of a delay because then the challenge ahead is brutal."

Lampard: We'll all club together

Chelsea manager Frank Lampard added: "I don't think there's anyone in any form of the game - Premier League at the top of the pyramid or grassroots football - that doesn't want to see this game continue and for clubs not to go under and people not lose their jobs. That's not just a problem for football and sport at the moment.

"So I think there will be some positive action and people at the top of the game to make those plans. I would certainly support any ideas to try and support grassroots sport to get the help it needs to stay alive. We will all try and club together."

Dyche: All market leaders must help

Burnley manager Sean Dyche believes football should not be the only industry expected to support their own.

He said: "If we can play our part and the powers that be decide somewhere we can help, then of course.

"But all of these top market leaders in their fields therefore should be protecting and looking after businesses which are maybe finding it tougher."

Rodgers: We must support the pyramid

Leicester manager Brendan Rodgers said "there is no answer" but the football pyramid is vital to the country.

"We all have to do everything to ensure we support all the teams that are in that pyramid."

Ancelotti: We have to help - not just in football

Everton boss Carlo Ancelotti said: "In my personal opinion we have to help each other to move on from this difficult moment - football, but normal life as well. In this difficult moment, everyone is going to hope that the stadiums will be full in the future, as soon as possible, but we have to follow the protocols and if there is a possibility of course. Helping each other could be a good sign."

Bruce: Many clubs may not survive

Newcastle boss Steve Bruce added: "My thoughts are always with the smaller clubs.

"They have been there 100 years and unfortunately if we are not careful, I think we are going to see a lot of them find it very difficult and may not survive."