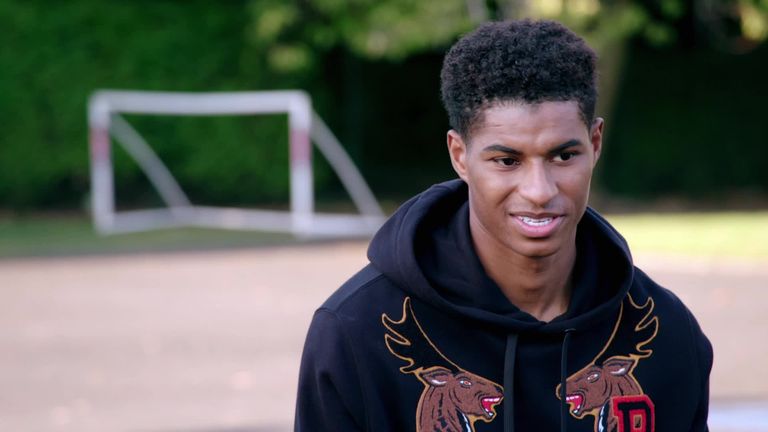 Manchester United and England forward Marcus Rashford has been awarded an MBE for services to vulnerable children in the UK during the coronavirus pandemic.

The 2020 Queen's Birthday Honours list was due to be published in June, but was pushed back to enable nominations for people playing crucial roles during the first months of the crisis.

Rashford, 22, successfully lobbied the Government into a U-turn over its free school meals policy during lockdown, ensuring children in need would receive meals across the summer.

The England international has since formed a child food poverty task force, linking up with some of the nation's biggest supermarkets and food brands.

During September, Rashford received the Professional Footballers' Association merit award for his efforts.

In a statement, Rashford said: "I'm incredibly honoured and humbled. As a young black man from Wythenshawe, never did I think I would be accepting an MBE, never mind an MBE at the age of 22. This is a very special moment for myself and my family, but particularly my mum who is the real deserving recipient of the honour.

"The fight to protect our most vulnerable children is far from over. I would be doing my community, and the families I have met and spoken with, an injustice if I didn't use this opportunity to respectfully urge the Prime Minister, who recommended me for this honour, to support our children during the October half term with an extension of the voucher scheme, as the furlough scheme comes to an end and we face increased unemployment. Another sticking plaster, but one that will give the parents of millions of children in the UK just one less thing to worry about. Rashford 'galvanised' society to do more to help vulnerable children

"Let's stand together in saying that no children in the UK should be going to bed hungry. As I have said many times before, no matter your feeling or opinion, not having access to food is NEVER the child's fault."

Rashford's club said they were "delighted" to see his work off the pitch had been recognised.

"Everyone at Manchester United is hugely proud of Marcus for the work he has been doing to tackle food poverty among vulnerable children," a club statement read.

"His campaigning has raised awareness of a crucial issue and made a positive difference, and we are delighted to see his efforts being recognised with this honour."

Brendan Foster has been awarded a knighthood for services to international and national sport and culture in north-east England.

Foster, from Hebburn, south Tyneside, went on to win 10,000m bronze at the Montreal Olympics, Great Britain's only track-and-field medal at the event, and secured gold at the 1978 Commonwealth Games.

Away from the track, Foster, who has also established himself as a commentator, founded the Great North Run.

In a statement, Foster said: "It is a real privilege to receive this honour. Fifty years ago The Queen presented me with my first athletics medal at the Edinburgh Commonwealth Games. Since then I've been lucky enough to spend my whole life doing something that I've loved from childhood; participating, sharing my enthusiasm through broadcasting and for the last 40 years encouraging thousands to run for pleasure.

"The North East has always been my home and at the heart of what I do. The overwhelming public support for the Great North Run has made it the flagship event for the region, which is something I'm very proud of.

"I have to recognise with thanks the significant contribution of lots of others in the awarding of this honour.

"It really has been my privilege to work with all those individuals and organisations who've shared the journey."

Rugby union coach Warren Gatland has been awarded a CBE for services to the sport in Wales.

The 57-year-old New Zealander stepped down after 12 years at the helm following the 2019 World Cup in Japan, where Wales were beaten by New Zealand in the bronze-medal match.

"I am incredibly honoured to receive a CBE," said Gatland.

"This award is recognition of everyone involved in Welsh rugby and all that we achieved together in my time as head coach.

"Rugby is a huge part of my life and has given me so much joy as a player, a father to a rugby-playing son and also as a coach. It has also given me so many friendships and experiences too.

"I feel very fortunate to be able to do something I love every day, and I would like to thank everyone who has supported me during my career."

Wales captain Alun Wyn Jones has been made an OBE for services to rugby union.

Jones is on course to match and surpass the record of New Zealand skipper Richie McCaw for most Test appearances later this month, with a friendly against France ahead of the delayed Guinness Six Nations clash with Scotland.

The 35-year-old Ospreys lock has also won nine caps for the Lions as he prepares for a 139th Test match with Wales, which had originally looked set for March.

Jones said: "It is a huge honour to receive such an accolade.

"I was initially reluctant to receive such an award in these trying times when there are so many people doing so much good for the community and are more worthy, but I see this as an acknowledgement to all the people who have helped me throughout my career."

Former Lions captain Gareth Thomas has been awarded a CBE for services to sport and health.

The Welshman came out as gay in 2009 and a decade later revealed he was HIV positive with undetectable status. The 46-year-old earlier this year launched the Tackle HIV campaign to improve public understanding of HIV and break the stigma around it.

Great Britain Winter Olympian Eve Muirhead has been awarded an MBE for services to curling.

The 30-year-old Scot led her team to Olympic bronze at Sochi 2014, but suffered a last-stone heartbreak when aiming to repeat the feat four years later in Pyeongchang.

Muirhead, a former junior and senior world champion, said: "Curling has been a huge part of my life and when I do finish curling I want to give back to the sport.

"I just feel like I want to give back to a sport that has given me so much throughout my career, including now the MBE.

"It shows I have been appreciated and I want to help as many people as possible achieve their own dreams in the sport."

Former England cricketer Darren Gough has been made an MBE for services to the sport and charity, while World Athletics' executive director communications Jacqueline Anne Brock-Doyle receives a CBE.