Liverpool produced a dominant performance in beating Leicester 3-0 at Anfield even without some of their star names. Could the depth provided by players such as Diogo Jota and James Milner hold the key to their title defence this season?

New Year’s Day, 2018. Turf Moor. That was the last time that Liverpool went into a Premier League game without either Virgil van Dijk or Mohamed Salah in their starting line-up.

Ragnar Klavan's stoppage-time winner secured the three points for Jurgen Klopp's side that day against Burnley but nothing quite so dramatic was required to see off Leicester.

Jonny Evans' own goal put Liverpool ahead inside 21 minutes and Diogo Jota's header doubled the advantage just before the interval.

There was no way back for Brendan Rodgers' Leicester. Roberto Firmino's late header sealed an emphatic victory. The win lifts the reigning champions up to second in the table with only goal difference preventing them knocking Tottenham off top spot. 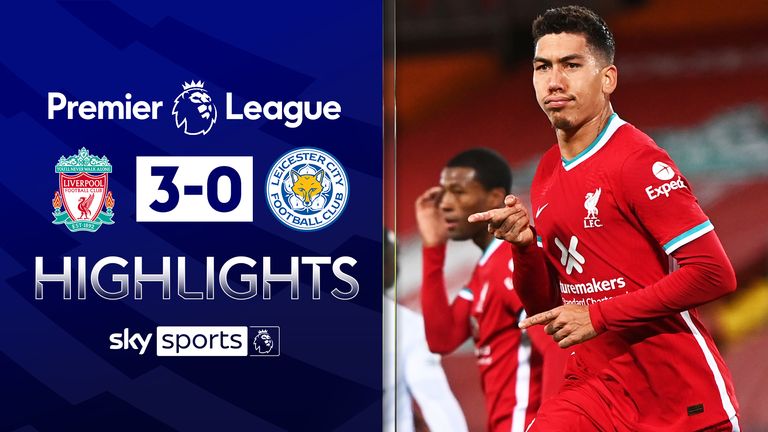 FREE TO WATCH: Highlights from Liverpool's 3-0 win over Leicester

This was a daunting looking fixture against the team that came into the weekend as the Premier League leaders, boasting a 100-per-cent record away from home this season. A record that included an emphatic 5-2 win over Manchester City at the Etihad Stadium.

The manner in which Jamie Vardy had cut through Pep Guardiola's team, coupled with the problems that Liverpool had experienced controlling the counter-attack at Aston Villa even with their stars, raised the prospect of that rarest of occurrences - a home defeat.

Instead, they negotiated the game with ease on a record-breaking night at Anfield in which Liverpool extended their unbeaten home run to 64 league games. It was a reminder that, whatever the line-up, the champions remain the team to beat this season.

The performance of the deputies illustrated that point.

Right from the outset, Leicester focused their attacks down Liverpool's right, where James Milner was starting for the first time this season in the absence of Trent Alexander-Arnold. Sixty-six percent of the attacks came down that flank with just 14 per cent on the other side.

"Maybe they are trying to exploit the fact that Liverpool have a makeshift full-back," said Jamie Carragher. "But you cannot really call him makeshift because he plays every position."

Milner more than did a job, he shone, constantly feeding the forwards with measured balls upfield. He helped create openings for Jota, Sadio Mane and Naby Keita, as well as providing the corners from which Evans headed past his own goalkeeper and Firmino added the third.

"His passing has been fantastic and he still has the energy to get down the line."

Under real pressure from James Justin and Harvey Barnes, Milner nevertheless finished the first half having had the most touches, created the most chances and won back possession of the ball more times than any other player on the pitch. It was an impressive effort.

When Keita went down with a muscle injury early in the second half, Milner showed his versatility by moving into midfield with Neco Williams coming on at right-back.

It was another reminder that, at 34, he remains a vital asset.

Jota adding so much in attack

The expectation was that Jota would prove useful in a similar way to Milner because of his ability to cover different positions and so it has proved. He has already filled in for Mane, Roberto Firmino and now Salah already this Premier League season.

But the surprise has been that Jota has done so much more than merely fill in. His goal against Leicester was his eighth of the season in all competitions and the fourth consecutive game at Anfield in which he has found the net. The September signing is flourishing.

"What a start he has made to his Liverpool career," said Carragher. "It was always thought that with Liverpool's front three nobody could really break into it but they certainly needed better back-up. I think he is making himself more than back-up at the moment."

Jota's overall performance was that of a player high in confidence and quality, testing Kasper Schmeichel with powerful efforts before and after his goal. Salah's ability to cut inside from that right wing is a key strength for Liverpool but Jota did a passable impression and was far too cute and quick for the ageing Christian Fuchs to cope with.

The result is that Liverpool were able to make light of their high-profile losses. Without their top scorer from last season, their greatest provider of goals, and the centre-back partnership that provided the platform for that success, they were still able to ease to victory against one of the in-form teams in the Premier League.

"To lose your two centre-backs for the whole season, not just in terms of this game but psychologically how that will have felt for Jurgen Klopp when he got his players back from the international break," said Carragher. "A lot of people will have felt that Leicester could have got something here today. It does feel like a huge victory."

The clean sheet, with Fabinho and Joel Matip doing well to deal with Vardy's superior pace, will be particularly satisfying for Klopp after a run of six Premier League games in which they were unable to keep the opposition out. The 19-year-old Curtis Jones, meanwhile, looked comfortable in midfield in what was only the third Premier League start of his career.

Whether Liverpool are able to cope with this growing injury list over a longer period of time remains unclear. Van Dijk's absence is long term, of course, and Alexander-Arnold looks set to miss more games before he returns from the calf problem that he picked up at Manchester City.

But such has been Jota's impact that there should be greater optimism that even before that missing Salah for a game or two need no longer be terminal to their hopes. As brilliant as they were, Liverpool could not have been expected to cope without him or Mane last term.

Now there is no guarantee they will even skip a beat.

Pitch to Post Podcast: Is Jota signing of the summer?