With more than just bragging rights at stake, Jamie Carragher and Gary Neville make their predictions ahead of Sunday's eagerly-awaited clash.

Premier League leaders Manchester United travel to Premier League champions Liverpool, live on Sky Sports Premier League on Sunday kick-off 4:30pm, and who else to dissect everything about both sides, and places, than Gary Neville and Jamie Carragher.

Both Sky Sports pundits joined Dave Jones on Zoom to discuss the heavyweight clash, which you can watch live on Super Sunday.

What is Super 6 Extra?

There is £5,000 up for grabs, and you can do this by correctly predicting six questions associated with this match: full-time score, half-time score, first goalscorer, first card, how many corners and man of the matc.

The contest between the two fierce rivals is this week's featured Super 6 Extra fixture, and you could win £5,000 for free by predicting what will unfold in the match. Play for free here.

Not only are three points on the line, but the Monday Night Football studio could be tasty depending on the outcome of Sunday's result, in which both are optimistic of a positive outcome.

Man of the Match? 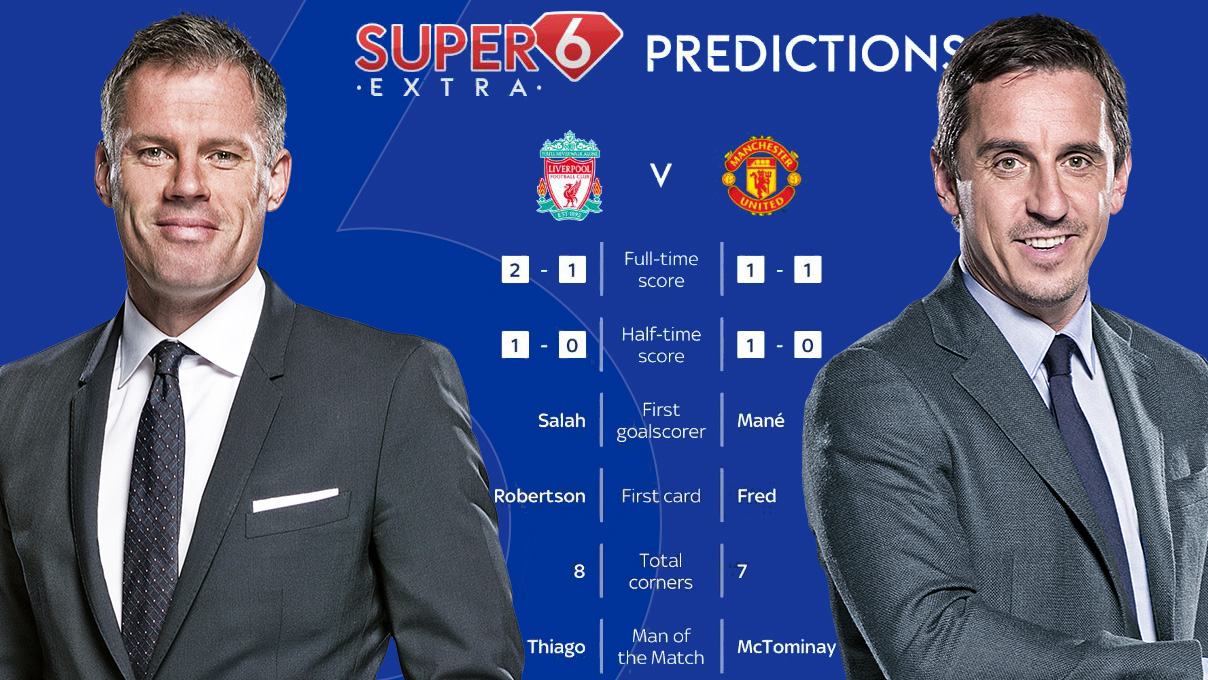 You too can get involved and make your selections for free. Make sure your players are starting, as per the team-sheet which will be available from 3:30pm Sunday, before placing your all-important decisions ahead of the 4:30pm deadline.

Manchester United went top of the Premier League after winning 1-0 at Burnley on Tuesday night.

Ole Gunnar Solskjaer's side are now three points ahead of their weekend opponents, and Neville did not pass up on the opportunity to get carried away and let Carragher know the standings.

"Play the message I sent you this morning," Neville asked Carragher. "I woke up this morning absolutely delirious.

"Three points clear...of the greatest Liverpool team of all time!" the video played, with Carragher showing it to Neville and Jones.

There have been some memorable players from these matches in the years gone by, and more importantly from both of these sides when they were at their very best. Carragher shares who one of his favourite players from Manchester United is.

"I would say [Roy] Keane, not just because he is our mate on Sky Sports and I am trying to get in his good books! He was a great player but the mentality of wanting to win was our type of player. We all wanted that, we were not the silky players.

"That winning mentality, and to do it week in week out. Man Utd have had great players, but I would have always gone with Keane. There are so many which you could choose from the 1990s era going into the 2000s. He was there a long time and a lot of their success was built form him."

How to play Super 6 Extra?

With this being the featured Super 6 Extra game, there is £5,000 up for grabs, and you can do this by correctly predicting six questions associated with this match.

Super 6 Extra is similar to the game we all know and love, but the beauty of our Sunday special lies in having to correctly predict the answers to six questions to scoop the jackpot: