Terry Gibson and Dharmesh Sheth give their views on what the next move could be for Gareth Bale; Tottenham travel to Wycombe in the FA Cup on Monday evening, which you can follow with our dedicated live blog across Sky Sports' digital platforms

Gareth Bale's loan return to Tottenham has failed to live up to the fanfare. On the latest Transfer Talk Podcast, the panel discuss where his future could lie.

The forward has made just one Premier League start so far this season, although he did arrive at Spurs carrying an injury that delayed his second debut for the club. He has featured more prominently in the Europa League and FA Cup.

Tottenham travel to Wycombe in the fourth round of the FA Cup on Monday and ahead of the game, manager Jose Mourinho said Bale needed to 'earn' his minutes.

"I cannot give players minutes, minutes on the pitch is not something I can give, so I'm not going in this direction," he said. "We all know the difficulties he had for a couple of seasons, we all know that he arrived injured, we all know that even this season (has been) a little bit up and down with small things.

"The most important thing for him is to be consistent, training without any problems and when a player is consistent in training, high intensity without any kind of problems, then the player is ready. Not to be given minutes, but is ready to earn minutes, and that for me is a difference.

"This week he is working every minute like everybody else at a good intensity and let's see the way that he reacts to the accumulation of that kind of work and let's see how he reacts by the end of the week."

It comes amid reports that Tottenham will not look to keep Bale past his season-long loan from Real Madrid. So where could his future lie?

'No chance of Bale staying at Spurs' 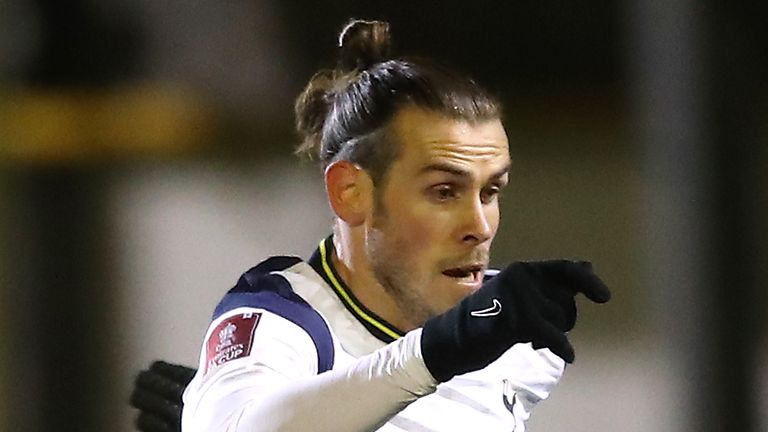 Spanish football expert Terry Gibson believes Bale will be leaving Tottenham, but has encouraged him to fight for his place.

He told the Transfer Talk Podcast: "Zinedine Zidane's got other things on his plate - I'm sure he's not even thinking about Gareth Bale right now!

"At the moment, you'd say there's no chance of him staying beyond this season with Spurs because it's not working out but we shouldn't be quick to blame him because there's a lack of playing time. Jose sees Bale in training every day; it's his prerogative not to play him.

"But because of his ability - he's still only 31 - there's a good chance if he gets a run of games, that will answer the questions. Is his body still up to playing five or six consecutive games? We haven't got the evidence yet. And does he fit into what Jose wants to do? Again, we haven't been able to see that yet. I think he can.

"A fit, healthy Bale would, in my opinion, be above [Lucas] Moura and [Steven] Bergwjin but we're suggesting he's been a failure with just one start in the Premier League. Until he gets the opportunity - whether he gets it or not is another matter - we can't say that but at the moment a second season doesn't look likely. Without seeing him given that opportunity, that would be a real waste of time and money.

"There's no point bringing in a player if the manager doesn't want him. Jose seemed enthusiastic at the time but I warned people about having to be patient.

"I knew he wasn't 100 per cent fit. His injuries have been an issue this season too - perhaps, Jose, having seen him, thinks he's not going to be the player he was, able to play week-in, week-out. Ultimately, we have to see Bale play. I hope he's still got the fire in his belly to fight for the rest of the season and prove Jose has to play him."

Sky Sports News reporter Dharmesh Sheth also raised the question over who made the final decision to bring Bale back to Spurs.

He added to the Transfer Talk Podcast: "All the talk was how the season-long loan for Bale was just going to be the start and that it would be extended into next season - his agent was even talking about it.

"What Bale needs to do, if he wants to stay, is force his way into the team and change the minds of people at Tottenham that he's worth keeping on.

"You wonder now, was this a Mourinho decision? If it was, you would have expected Bale to have had more opportunities. Or, as some people suspect, was it a Daniel Levy decision? You can't blame Levy for thinking about the potential off as well as on the pitch with all the marketing opportunities with Bale."