Vestergaard will be available for manager Ralph Hasenhuttl ahead of Southampton's next game on Saturday away at Liverpool which will be shown live on Sky Sports Premier League and Main Event from 7:45pm, kick-off 8:15pm

Jannik Vestergaard's one-match ban for being shown a red card during Southampton's 1-1 draw with Leicester has been rescinded following a successful appeal.

Vestergaard was dismissed 10 minutes into their game against Brendan Rodgers' side, with the defender adjudged to have denied Leicester striker Jamie Vardy a goalscoring opportunity. The decision, made by match referee Robert Jones and the subsequent approval by VAR, came despite television pictures clearly showing that the Danish international had in fact won the ball before making any contact with his opponent.

"The Southampton FC defender was dismissed for denying an obvious goalscoring opportunity during the Premier League fixture against Leicester City on Friday 30 April 2021."

After the final whistle, Saints boss Ralph Hasenhuttl fumed at the decision, saying the explanation which the PGMOL gave that Vardy had been denied a clear goalscoring chance as a result of the challenge with Vestergaard was "simply wrong".

He said: "The official explanation was denial of a clear goalscoring opportunity. The goalkeeper was near the ball, he could pick it up. I think he [Vardy] would never get this ball. This explanation is simply wrong.

"I thought it was [going to be] a penalty and then it would be even more difficult, but when you see the red card then you see that it was absolutely the wrong decision and we deserved to get something today. 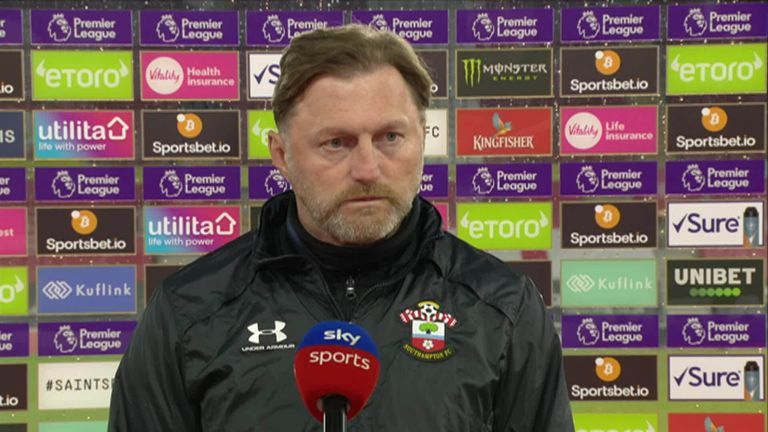 "Jon Moss has seen it, the VAR, and he says it's a red card, although Vardy never had the ball. The denial of a clear goalscoring opportunity is an argument that I cannot agree [with]."

Vestergaard, 28, who has made 25 appearances in the top-flight so far this season, will now be available to play in Southampton's game against Liverpool at Anfield this Saturday, live on Sky Sports Premier League and Main Event.

Hasenhuttl's Saints are 15th in the Premier League, ten points clear of the relegation places, with five games remaining this season.