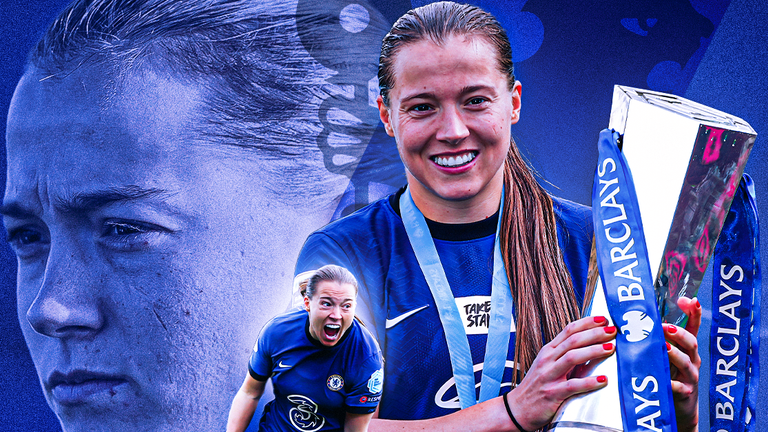 Chelsea forward Fran Kirby has been named the Football Writers' Association Women's Footballer of the Year for the second time in her career.

"It's really special," Kirby told Sky Sports News after adding to her 2017/18 award.

"I think everyone in this building knows that I play for this team, I play for every single person who walks in here every day and I think I show that in my performances.

"I will run through a brick wall for these girls and all the staff and I think everyone can see that, and I'm really, really humbled to win these awards and it's amazing, but I know that I would never be able to achieve anything that I've achieved without them."

Kirby's stunning season followed a near year-long absence with a viral illness that threatened to end her career.

In November 2019 she was diagnosed with pericarditis - relating to swelling around her heart - and returned to action at the start of the 2020/21 campaign with limited expectations.

"For me at the beginning of the year I had no expectations of how my year was going to go," Kirby said.

"It was difficult to have to start from scratch. I had no fitness level, I hadn't kicked a football in six months, so I think for me that was the hardest part."

Kirby was the unanimous choice of a panel of more than 30 football writers who specialise in the women's game.

Chair of the FWA's women's sub-committee Jen O'Neill said: "To have overcome a serious health condition and return in such sparkling form is admirable and inspiring.

"Several players, including many of her Chelsea team-mates, have been outstanding in a superb WSL season - but there are fewer more joyful sights in football than a smiling, fit and firing Fran Kirby."