Chelsea thrashed Reading 5-0 on Sunday to win back-to-back Women's Super League titles and their quadruple challenge is still on; Emma Hayes: "Last season we weren't the champions in some people's eyes. But this season the players really wanted to demonstrate we're the champions" Chelsea manager Emma Hayes says this season's Women's Super League title win is her favourite so far, as her side remain on track to win the quadruple this campaign

Emma Hayes admitted Chelsea felt they had a point to prove this season as they retained the Women's Super League title in style.

Last year's success came on a points-per-game basis when the campaign was halted due to the coronavirus pandemic in March 2020, when the Blues were a point behind leaders Manchester City with a game in hand.

But Hayes' side left no doubters this time as they secured the title on the last day of the season with a 5-0 thrashing of Reading.

Hayes said: "Last season we weren't the champions in some people's eyes. But this season the players really wanted to demonstrate we're the champions. Lianne Sanderson, Siobhan Chamberlain and Sue Smith agree that Chelsea are deserved champions after claiming the WSL title on the final day of the season

"There were four teams who could have been in with a shout and it's gone to the last day which just demonstrates how hard it is."

Needing a win to deny City any chance of passing them in the table, the hosts took the lead in the second minute at Kingsmeadow through Melanie Leupolz.

Fran Kirby's double and goals from Sam Kerr and Erin Cuthbert rounded off a thumping win that gave quadruple-chasing Chelsea a second piece of silverware of the campaign. 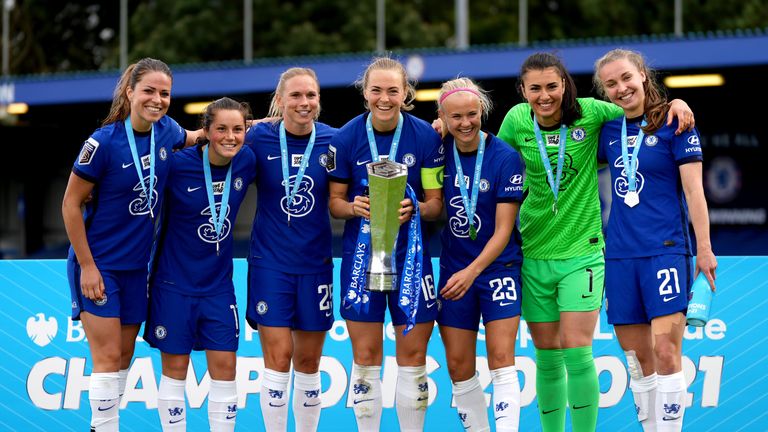 "Knowing you're coming into the last game and it's in your hands is the only place you want to be," Hayes said.

"The whole season we've only lost one game. We're never too good to lose and it keeps you on the edge. My team show so many sides again and again - and today another brilliant result.

"I'm so gutted for [the fans]. This team is amazing and they haven't had the chance to experience them in the stadium."

The coronavirus pandemic has also caused issues to deal with within the team.

Hayes added: "I've had to manage a dressing room of people who haven't been home in over a year - to keep them going when they're homesick and struggling. It's tested me on another level.

"People think having strength in depth is an advantage - well you manage them, then!

"I accept I cannot make them all happy. My job has always been to put them in the position to compete.

"We don't tire of winning. There's not enough of it. I'm not sorry for what I've put the players through."

Next up for Chelsea is next weekend's Champions League final against Barcelona, but Hayes will allow her team a chance to celebrate their title success.

"This is a moment to enjoy," she said.