#HerGameToo anti-sexism movement standing up against sexism in football

#HerGameToo launched on FA Cup final day aiming to support women across football against discrimination, with its launch video racking up more than one million views

A new movement targeting sexism in football has gone viral barely a week after launching, with support from leading figures in the women's game.

Discrimination against women, both online and in person, prompted a group of fans to stand up - and put themselves in the firing line - in an attempt to help stamp it out.

Their campaign, #HerGameToo, launched via Twitter on FA Cup final day, featuring a video of female fans highlighting abuse they had received from other football supporters, from 'you know nothing about football, you're a woman' to more explicit and derogatory messages.

By lunchtime, it was the second-highest trend on Twitter in the whole of the United Kingdom. Within 48 hours, it had over a million views. Less than two weeks on, the movement has featured on national news, has been promoted by the EFL and backed by a number of professional clubs.

"It feels like sexism has become much more apparent since lockdown with more people spending time on social media," the group's founder, Caz May, told Sky Sports.

"I was noticing sexist abuse towards female fans, pundits, referees, players, journalists and others on my timeline daily - it was becoming too much. I wanted to make a change.

"Many women have had the classic 'get back to the kitchen' line thrown their way when trying to have a well-reasoned debate on a game of football. We have had men use derogatory, misogynistic terms in response to a football opinion.

"Sometimes it will even go as personal as to attack our body image and, more specifically, our female body parts. It's condescending, unwelcoming and hurtful.

"Trending second on FA Cup day was truly incredible. To see people using our hashtag was heart-warming. We couldn't believe we achieved such a positive reaction and we are so grateful for every single message of support."

Within days, #HerGameToo had gone from a standing start to reaching football fans across the country and beyond - with former USA number one Hope Solo among those to tweet their support.

So what now needs to happen to turn those numbers into real change?

"Ultimately - we want to create a more welcoming and inclusive atmosphere for females at football games," says May.

"This not only includes women already involved but the next generation of young girls who grow up to love the game, too.

"We will achieve this by continuing to raise awareness and educating people on the issue. We need men to stand by us and fight against sexist comments just as much as women. 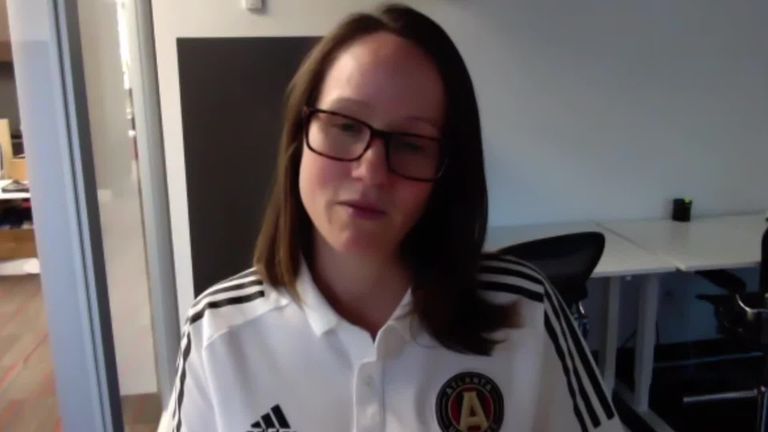 Atlanta United head of technical recruitment Lucy Rushton talks about how she has dealt with instances of sexism in the game, using it as a motivating factor.

"We want women from all backgrounds to come forward because the more women that speak out and share their story - the more powerful this will become."

'The more we educate the next generation, the better'

Among those to message their support to the #HerGameToo movement was Sky Sports News' Michelle Owen, who has regularly spoken up against sexist abuse on social media.

She paid tribute to the team's work in looking to stamp out discrimination - and told Sky Sports of her own experiences of discrimination through her role.

"There have been occasions where fans have been a little over the top, in the sense they've been very keen to talk about how I look and what they think of me. I know they wouldn't go up to a man and comment on his looks - so we could do without that.

"On social media it's a different story, have an opinion and the messages are things like 'get back in the kitchen', 'make me a sandwich' and so on. And they're the more publishable ones.

"I'm so impressed with these women. Standing up for something while knowing they will get some abuse back is courageous. But if you have some enemies, at least you stand for something, so huge credit to them.

"I think more than ever there's so many genuinely supportive women involved in football, and that is going to have a big positive impact for us all, for men and women. Some men offer support and get 'she won't **** you mate'.

"The more we can educate the next generation on the power of their words the better. Not everyone will listen, or care, but some will - and that is something."