England international Nikita Parris close to sealing a return to the Women's Super League two years after leaving Manchester City; Arsenal have agreed a deal with Lyon for the striker, who is already back in the UK and is set to undergo a medical in the next days

Parris has agreed personal terms with Arsenal and is already back in England to undergo a medical in the next few days.

She would be making a return to England two years after leaving Manchester City for Lyon, where she won a league, cup and Women's Champions League treble in her first season.

The striker is said to be "excited about a potential return to play in the WSL after a successful period in France with Lyon".

In May, Sky Sports News reported Arsenal and Lyon were in talks over a deal for Vivianne Miedema and Nikita Parris to swap clubs.

The French club have been looking to sign Miedema for a year and Arsenal must now decide whether to sell the Netherlands international, as she enters the final 12 months of her contract.

Parris scored 13 goals in 20 appearances this term for Lyon but missed out on the Ligue 1 title on the final day to Paris Saint-Germain, who also knocked them out of the Champions League at the quarter-final stage.

She left the WSL as its record scorer with 49 goals, a tally surpassed this season by Miedema and City's Ellen White.

Parris won one Women's Super League title, two FA Cups and two Continental League Cups in her three years in Manchester after arriving in 2016 from her youth club Everton.

She was named in Team GB's team to take part at Tokyo 2020 by caretaker boss Hege Riise, following in the footsteps of her sister Natasha Jonas in representing Great Britain at the Olympics.

Arsenal failed to win any silverware last season but beat Manchester United to the final Women's Champions League spot by one point.

They are looking for a new manager after Joe Montemurro left for Juventus Women and also confirmed the exits of Jill Roord to Wolfsburg and right-back Leonie Maier upon the expiry of her contract.

Sky Sports will become the primary broadcaster of the Barclays Women's Super League from September 2021 and will show at least 35 games exclusively live per season. 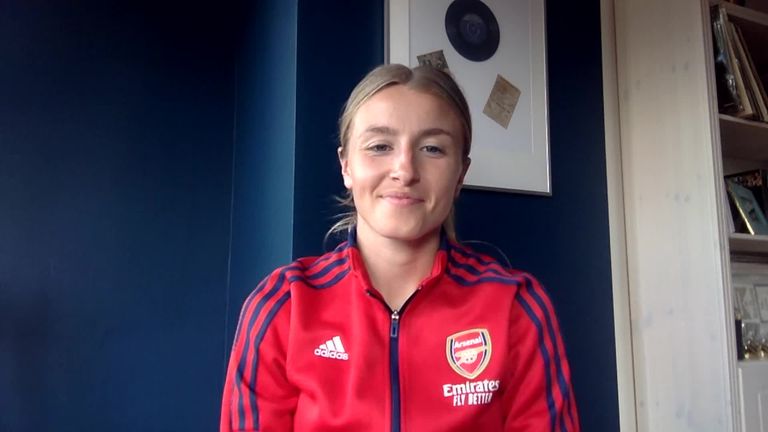 The 24-year-old defender joined the club at nine years of age and went on to win one Women's Super League title, two FA Cups and two League Cups after breaking through the youth ranks.

Williamson told Sky Sports News she had interest from other clubs and was torn between staying at her home club or looking for a new challenge.

"I know having spoken to the club that their ambitions are still as high as they ever have been, which matches my own personal ambitions," she said.

"Arsenal has been such a major part of my life that while there's still a chance that I can achieve my goals here, in an Arsenal shirt, that's where I'll be.

"This has probably been the toughest decision I've had to make in terms of having interest from elsewhere, but also just being at a crossroads and figuring out what my next step is. In the end, Arsenal are still the club for me."